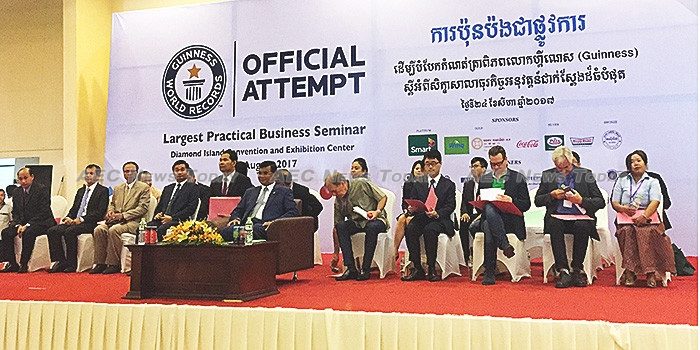 The Kingdom of Cambodia looks set to be awarded a Guinness World Record for the ‘largest practical business seminar’ after more than 2,000 Cambodian youth participated in a workshop/ seminar last Thursday, August 24, as part of an initiative aimed at promoting entrepreneurship throughout the country.

Backed by the Cambodian Ministry of Education, Youth and Sports (MoEYS) and supported by the International Labour Organization (ILO), the business seminar was part of a government-industry partnership themed GoBusiness17, which encourages Cambodian youth to explore their potential and to not be dissuaded from following their dreams.

In pursuit of this the MoEYS, with support from the Cambodia Ministry of Labour and Vocational Training (MLVT), the Japan Social Safety Net Fund (JSSNF), and the ILO, hosted a mass entrepreneurship seminar where successful Khmer entrepreneurs, academics, officials, and industry experts provided Cambodia youth with details of the challenges ahead; and the resources available to assist them in establishing their own businesses.

Addressing the more than 2,000 Cambodia youth attending the seminar, Cambodia Minister of Education, Youth and Sports, Hang Chuon Naron, said that the education focus has now shifted to those skills that young Cambodians need in order to develop their future career either working for others, or for starting their own business.

“The ministry is building the foundation – education and other skills – for youth with a focuses on science, technology, engineering, and mathematics (Stem), because it is important for their career path.”

While entrepreneurship is not currently part of the Cambodia education curriculum, Vic van Vuuren, director of enterprise department for the ILO said the concept of entrepreneurial skills will be added to the formal education process soon.

Mr Vic said the ILO is working closely with the MoEYS and the MLVT to build the curricular for future employment in Cambodia, including which entrepreneurial skills are most needed for development.

Commenting on the Guinness World Record attempt Mr Vic said being awarded a world record was a secondary consideration. There will be future entrepreneur training conducted by the ministries under the GoBusiness17 theme, but not on the scale of today’s event.

The purpose of the largest practical business seminar, he said, was to highlight Cambodian entrepreneurship, build capacity, and disseminate information of the resources available from the private and public sector to Cambodia youth. Being recognised internationally for our effort would be an added bonus, he said.

AEC News Today spoke to some of the Cambodia youth participating in the seminar and while some said they were inspired to proceed down the entrepreneur path and wanted to start their own business, several others said they were hoping for even more information on taking the step as an entrepreneur. Both encouraging signs that the mass entrepreneurs seminar had achieved its goals.

A New World Record For Cambodia?

According to Stephen Paterson, a senior advisor on strategic management & entrepreneurship to the international programme at the National University of Management (NUM), and the designated Guinness World Record adjudicator, the seminar needed more than just numbers to qualify as a world record.

“They [the participants] must do the work. There are certain requirements by Guinness World Records and to ensure all of those are met witnesses and observers are deployed. Their information and feedback will be incorporated into a final report which will be sent to Guinness World Records”, Mr Paterson said.

Having explained the requirements, Mr Paterson said that he thought the world record attempt would be recognised as from what he could see, the specified requirements had been met.

If Cambodia gains the Guinness World Record for the largest practical business seminar it will join a handful of other such titles held by the small Southeast Asian Kingdom including:

Kongleaphy Keam in Phnom Penh contributed to this report