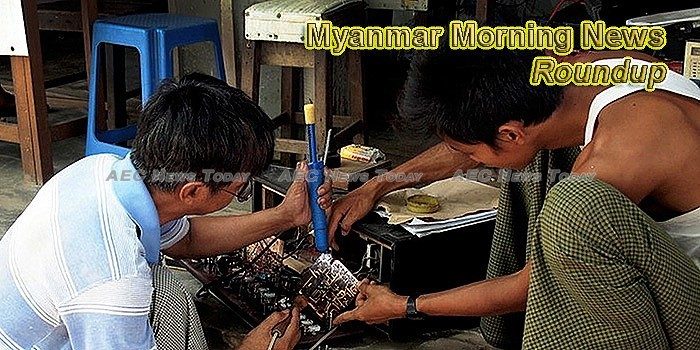 Myanmar among worst places for human trafficking, US report says
Myanmar has joined China, Syria and South Sudan as being among the countries doing least to tackle human trafficking, according to the US State Department’s latest annual Trafficking in Persons (TIP) report.
— CNN

Myanmar races to feed a growing Yangon
Rapid urbanization in and around Myanmar’s southern city of Yangon has turned up the pressure to develop goods and services that can meet the rising demand.
— Nikkei Asian Review (metered paywall)

Chinese Fiber-Optic Firm Plans to List Myanmar, Cambodia Assets in U.S.
A Chinese fiber-optic network company is planning a U.S. listing of the assets it holds in Myanmar and Cambodia, which could give foreign investors rare exposure to the two Southeast Asian countries, people familiar with the matter said.
— The Wall Street Journal

Companies Law to Take Effect in Shadow of Rakhine Crisis, Civil War
Amid growing concern over the economic policies of the ruling National League for Democracy (NLD), a long awaited Companies Law will take effect on Aug. 1, bringing with it hopes of more foreign investment, greater transparency and improved regulation.
— The Irrawaddy

Will an alleged war criminal become president of Myanmar?
Will Senior General Min Aung Hlaing be brought before the International Criminal Court (ICC) in The Hague on charges of crimes against humanity, or instead be popularly elected on a nationalistic wave as Myanmar’s next president?
— Asia Times

China, Myanmar agree to maintain border stability
China and Myanmar has agreed to maintain peace and security in their border area.
— Xinhua Net

Fresenius Medical Care opens office in Myanmar to better address healthcare needs of the country
Fresenius Medicare Care, the world’s largest provider of dialysis products and services, is pleased to announce the opening of its office in Yangon, Myanmar.
— Asia One

Fears for ‘stateless’ Myanmar workers in Thailand as deadline looms
Thousands of Muslim migrant workers from Myanmar risk being fined and deported from Thailand after June 30, under a new law that campaigners say may increase abuse and trafficking.
— ReliefWeb

Myanmar shouldn’t write off China without understanding her neighbour
An old Chinese proverb goes like this: “Three men make a tiger.” It means that if an unfounded premise is repeated many times, the premise will be accepted as the truth.
— The Myanmar Times

MIC to improve procedures for doing business in Myanmar
The Myanmar Investment Commission (MIC), under the stewardship of new chair U Thaung Tun and U Set Aung, who is deputy minister for planning and finance, will implement a slew of changes aimed at reducing red tape and facilitating ease of doing business in Myanmar, MIC secretary U Aung Naing Oo told the media on Monday.
— The Myanmar Times