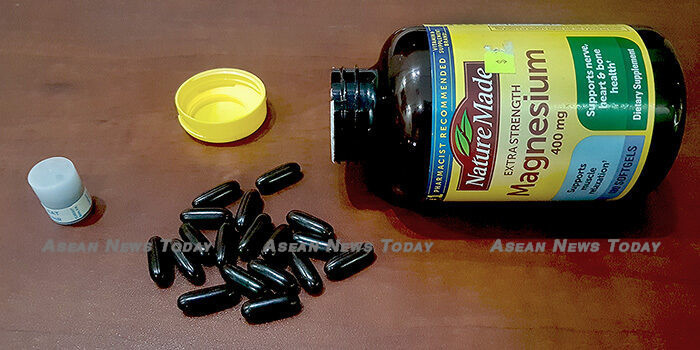 Pharmacists in the Cambodian capital Phnom Penh have been clearing stock of Nature Made 400mg magnesium capsules in the wake of complaints by consumers of the supplement emitting a putrid ammonia-like odor.

Magnesium is essential to the body’s function, helping keep blood pressure normal, bones strong, and the heart rhythm steady. It is regularly taken as a dietary supplement by people seeking relief from a wide range of ailments including migraine, ADHD, leg cramps, constipation, heart disease, and more.

Pharmacists in the National Stadium medical supply part of Phnom Penh told Asean News Today that they had stopped selling Nature Made 400mg magnesium capsules due to complaints by customers over a recent period of a putrid ammonia-like smell emanating from the bottles.

They said that they had never smelt anything similar in a vitamin product before and customers and they were concerned at the dangers that might come with consumption. In any event, they said that their customers had refused to take them.

Asean News Today was shown partially consumed bottles of Nature Made 400mg magnesium capsules that had been returned by customers and can confirm that they had a putrid smell, not too indifferent to full-strength ammonia floor cleaner. The bottles we examined were from different batch lots and had one year or more until reaching their best-by date.

The five pharmacies spoken to said that they had all refunded the customer’s purchase their price of between $30 and $36, depending on the pharmacy.

The pharmacists said that they would not be able to get reimbursed for their losses so the rancid Nature Made 400mg magnesium capsules were just being thrown in the trash.  Across the five pharmacies it was estimated that more than 50 bottles had been removed from the shelves and trashed to date, though they all said that it was possible more would be returned due to quantity in one bottle (180 capsules)

Two of the pharmacists said that they had tried to contact Nature Made about the situation, but were unable to complete the website feedback form because it requires a USA address to submit.

Asean News Today checked the Nature Made website and found that is indeed the case, with the only other contact method displayed being a telephone number in the USA; consumers outside of the USA apparantly not being a big concern of the company. Attempts to contact Nature Made via it’s Facebook page and Twitter were not responded to.

Company aware of problem since 2017

After working our way around the company’s feedback form a call center operator somewhere pressed an F key and sent a canned reply stating:

We recently received your email regarding Nature Made Magnesium 400MG. We regret to hear that you were not satisfied with the odor of your product.

We take all product complaints very seriously and appreciate that you took the time to inform us of your experience with the product. There is a possibility that occasionally softgel capsules may leak, and the strong odor in the Nature Made Magnesium softgels is caused by these leaking capsules. We are aware that some consumers have experienced this issue and we are working diligently on a corrective action to help prevent the odor with this product. We are happy to inform you that this does not affect the safety of the product. We are regretful for any concern this may have caused you.

We thank you for contacting us and hope that you will continue to use and enjoy Nature Made products with complete confidence.

An online check found that consumers have been complaining about the putrid smell from some Nature Made 400mg magnesium capsule bottles since 2017 making it hard to accept the ‘we are working diligently on a corrective action’ claim in the automated reply.

Possibility of putrid odor not disclosed

While there is no mention of the possibility of a putrid odor on the product label, or on the Nature Made website, the inclusion of a fairly large charcoal filter instead of the more standard desiccant moisture absorber may be an attempt to also filter the odor.

With such a pungent odor it’s hard to imagine how anyone could contemplate ingesting one of the “leaky” capsules, and indeed there are more than a few reports online of people becoming nauseous after doing so.

Despite repeated requests Nature Made has not made a company spokesperson available to answer questions on the putrid smelling vitamins, or provide any research to show that the ammonia tainting is harmless.

Asean News Today has reached out to the United States Food and Drug Administration (USFDA) to see if they can throw any light on the topic. Cambodia’s Ministry of Health (MoH) spokesperson, Or Vandine, did not immediately respond to emailed questions.

Until the situation is further clarified with some scientific facts, consumers with Nature Made 400mg magnesium capsules that have a strong ammonia smell should perhaps avoid their consumption and return them to the point of purchase.

Nature Made is produced by American dietary supplements company Pharmavite, which is owned by Otsuka Pharmaceutical Co. (OPC), a Japanese pharmaceutical company headquartered in Tokyo.

The Asean dietary supplements market is expected to reach $10.6 billion by 2026 with a compound annual growth rate (CAGR) of 5.6 per cent.