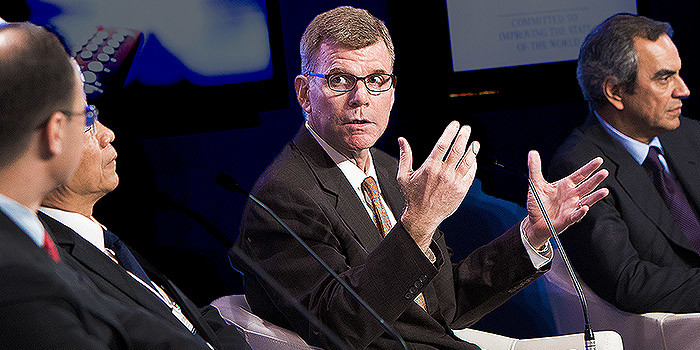 In the next 15 years the faces of Asean are set to change drastically. Although the population of Asean in 2030 will be richer and largely urbanised, the majority of the region’s GDP will still be produced by the 30 per cent of the population who remain in the countryside.

By 2050 there will be more people over 65 than under 14, presenting governments throughout the region with a whole new range of challenges. These were the main take-aways from a speech by Stephen Groff, Vice-President (Operations 2) for the Asian Development Bank (ADB) at an AIESEC-ADB Youth Movers’ Discussion in Indonesia recently.

According to Mr Groff five of the seven countries with the fastest population growth globally will be in Asia by 2030, while nearly two billion of the 2.4 billion new middle class consumers created globally will be from Asia.

Coupled with a report earlier this year by the International Labour Organization (ILO) that more than 50 per cent of workers in the Asean Community (AC) are at high risk of losing their jobs over the next decade to automation and it’s clear that countries now need to be contemplating significant changes if they are going to be able to meet the challenges that Asean in 2030 will bring.

A Roadmap For Investors

The forecasts also paint a roadmap for investors on where growth areas are likely to emerge in Asean in 2030, and which country’s they should be looking at if they are to maintain a ready supply of labour.

While forecasting abject poverty in Asean in 2030 to have been wiped out by high economic growth, Mr Groff also said “rising income disparities will create social discord if left unaddressed”.

Mr Groff also told the AIESEC-ADB Youth Movers’, the largest youth-run organisation in the world, that natural resources such as water will come under increasing strain in Asean in 2030 and beyond.

“We can expect older people to continue living and working longer. This in turn means that Asia’s social protection mechanisms such as healthcare and pension schemes will need to be strengthened.

“This also means that the region will need to become more integrated with open labor migration policies, so that workers from a labor surplus region can work where there is demand for their skills”, Mr Groff added.

Highlighting the rapid technological advances being experienced by Asian youth, even in rural areas, Mr Groff said governments need to harness these knowledge and skills.

“Rapid advancements in artificial intelligence, robotics and telecommunication mean that a number of repetitive jobs are being made redundant, even in government” Mr Groff said, noting that the implications were not only for education and skills policies, but how governments and citizens design cities, public transportation networks, logistics and building codes for the future.

The ADB forecast for Asean in 2030 is in line with forecasts made by Wolfram Hedrich and Jonathan Tan from the Asia Pacific Risk Center.

In Is an Aging Asia a $20 Trillion Risk or Opportunity? they forecast the number of elderly people in Asia to increase by 200 million by 2030, a 71 per cent increase compared to Europe at 31 per cent and North America at 55 per cent.

They go on to say that greater life expectancy is accompanied by a greater duration of disability and non-communicable diseases, such as diabetes and dementia. This in turn will mean an increase in healthcare services such as long-term care facilities and trained workers to run them.

One solution being trialled in Japan, which will become “ultra-aged” by 2030, is to make up for workforce shortages by using robotic technology to assist elderly people and their carers.

According to the ILO some three in five jobs in the Asean-5 (Cambodia, Indonesia, the Philippines, Thailand and Vietnam) face a high risk of being replaced by automation in Asean in 2030, with garment and footwear workers in Cambodia and Vietnam facing the highest risk of replacement by automated assembly lines, known as ‘sewbots.’

Education, or lack thereof, has a lot to do with those in the high risk zone. The report finds workers possessing only a primary degree or less have a 10-30 per cent higher chance of losing their jobs to automatons than secondary school graduates. For those with a tertiary education the risk is substantially lower.

These trends support the notion that higher education and training are vital to develop the competencies needed for complicated tasks that are difficult to replace with a machine… in addition to the skills to operate and service the machines.

Asean in 2030 a Burgeoning Consumer Market

As economic growth in China and India slow the Asean region is predicted to soar according to a report by Nielsen Holdings, a UK based global information and measurement company.

Galloping economic growth in the Asean Community will see the middle class more than double by 2020 to 400 million the company predicts. A growing population combined with financial prosperity and a heightened consumption mentality will provide a fertile environment for the consumer market, Neilsen concludes.

This is already evident in Vietnam where there is an emerging market catering to Vietnamese women who now have more access to entertainment, smart phones, the Internet, and money (See: Vietnamese Women A Rising Consumer Segment).

However, more consumption means more strain on infrastructure, natural resources and higher pollution. According to the World Bank some 200 million people migrated to cities between 2000 and 2010, making poorly planned cities worse due to a lack of conceived urbanisation.

In Rising Temperatures Are Making Life in Tropical Cities Precarious for the Poor Chanran Nair, founder and CEO of independent Hong Kong based pan-Asian think tank Global Institute For Tomorrow, says that many of these migrants must live in shanty towns or poorly constructed buildings and deal with sweltering congestion on the roads. In Jakarta, for example the number of vehicles on the road increases by 10 per cent each year.

For the rural community Asean in 2030 will see increasing demands for clean and green produce from traditional and non-traditional trading partners.

Those who can comply with increasing levels of compliance with international standards from farm-to-table will reap the benefits of Asean in 2030, while those who attempt to pass on inferior product are likely to find themselves subject to increasingly rigorous use of non-tariff barriers to bare their produce from key markets.

The Southern Shrimp Alliance, a US NGO which aims to prevent the deterioration of the US shrimp industry reports that earlier this year the US Food and Drug Administration (FDA) banned shrimp from Vietnam and Malaysia due to veterinary drug residue contamination, while Vietnamese catfish were similarly banned from entry to the US early this year over high levels traces of banned chemicals and antibiotics.

Earlier this week the Bangkok Post reported Pimchanok Vonkhorporn, Thailand’s deputy director–general of Trade Policy and Strategy Office under the Commerce Ministry, as warning exporters of the risk of failing to comply with food safety standards.

“Based on our observations, developed countries have intensified the use of non-tariff measures, technical barriers to trade, sanitary and phytosanitary measures and other environment measures”, she was quoted as saying.

The report said Ms Vonkhorporn cited a World Trade Organization (WTO) report that in 2015, the US applied up to 153 technical barriers to trade (TBT) while the EU applied 77, and Japan 36.

When the FDAs new Food Safety Modernization Act (FSMA) comes into effect later this year exporters of produce to the US can expect heightened levels of inspection for compliance to chemical contamination, pest infestation, and the use of child and forced labour in the entire supply chain, she said.