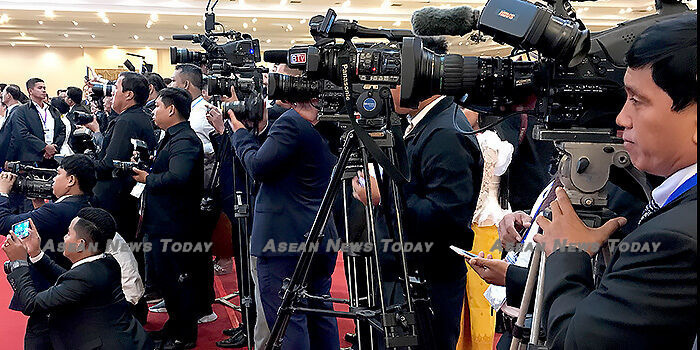 A report published yesterday (Aug 3) by the UN Human Rights Office (OHCHR) says that journalists in Cambodia are increasingly being subjected to various forms of harassment and pressure, as well as violence.

The report, State of Press Freedom in Cambodia, claims to outline the current press freedom situation in Cambodia, examining the legal framework upholding the right to freedom of expression and the freedom of the press.

Compiled by the OHCR Cambodia office (OHCHR Cambodia), the State of Press Freedom in Cambodia also looks at the introduction of legislation related to the conduct of the media, the application of the criminal law against journalists and other media personnel, media ownership, and the specific challenges faced by women media personnel working in Cambodia.

Covering the period from the 2018 national election up until the commune election in June 2022, the report contains information from 65 Cambodian journalists who were interviewed and surveyed during its compilation.

All 65 reported that they had faced some form of interference in the course of their work. More than 80 per cent said that they had experienced surveillance and disproportionate or unnecessary restrictions, including in relation to access to information.

State of Press Freedom in Cambodia also highlights the specific obstacles that women media workers face, including the lack of leadership roles, harassment, and gender-based violence.

Amongst specific cases highlight include that of Rath Rott Mony and Ros Sokhet, as well as the closure of The Cambodia Daily and Radio Free Asia (RFA) office.

The sale of The Phnom Penh Post is also mentioned, though curiously there is no mention of the Khmer Times, along with a short footnote for each case summarising the Cambodian government’s response.

Mr Mony was a translator who worked for Russia Today on a documentary on child sex trafficking in Cambodia. He was arrested in Thailand and forcibly returned to Cambodia and charged with incitement to discriminate under Article 496 of the Criminal Code.

The specific allegation being that by reporting on sex trafficking in Cambodia, he undermined the reputation of Cambodia and caused people to look down on or discriminate against Cambodia.

In June 2019, the Phnom Penh Municipal Court sentenced Mr Mony to two years jail. After having completed his sentence in December 2020, Mr Mony was released and fled Cambodia.

Mr Sokhet, founder of the independent newspaper Khmer Nation, was sentenced to 18 months imprisonment and fined KHR 2 million (about US$487) incitement to provoke serious social disorder for publishing several posts to his personal Facebook page, which were critical of the Cambodian authorities, including the Prime Minister.

The State of Press Freedom in Cambodia, however, loses some credibility with the inclusion of the closure of The Cambodia Daily and the local office of RFA.

Both organisations were non-compliant with Cambodian registration laws and neither were meeting their tax obligations. To get both of these closures to the point of being an example of the state of press freedom in Cambodia, OHCHR needs to first getting over these hurdles, which it fails to do.

The Cambodia Daily had been publishing for 24-years as a non-profit, but had not registered as such. Further, it had implement a paywall and was selling advertising. By not paying tax it had a considerable advantage over its rivals, The Phnom Penh Post and the Khmer Times. It was well known at the time that this was a considerable sore point with the Posts former owner, Australian mining magnate Bill Clough.

It was widely rumoured at the time that complaints by the Post led to Cambodia’s General Department of Taxation (GDT) performing an internal calculation of unpaid taxes and penalties for the previous five years based on similar businesses in the same industry,  calculating a total tax bill of $6.3 million, payable within 30-days of issuance. The story the publication and its staff promoted at the time was that it was because of their reporting style.

The publication’s editor at the time is on record telling a group of journalists at a ‘town hall’ meeting of the Overseas Press Club of Cambodia (OPCC) that the publication’s tax problems were due to its “previous owner who was tax defiant”, doesn’t help. Neither does acknowledgement of a “legitimate” tax dispute by the publication.

Similarly, RFA’s Cambodia office had also been found to be operating noncompliant, neither registered as a business entity, in possession of a publishing licence, nor registered with the GDT.

At the time Cambodia government spokesman Phay Siphan told AEC News Today (the forerunner of this publication) that ‘the government had asked RFA to do the right thing’ in 2017 and they chose to close and leave. Instead they continued operating in secret‘.

At the end of the day both organisations and the staff who worked there who paid no income tax were tax cheats, conducting business with an unfair advantage over their competitors. Something that those employed at each chose to turn a blind eye to as they tried to hold others to higher standards than their own employer.

OHCHR “very concerned” at state of press freedom in Cambodia

UN High Commissioner for Human Rights, Michelle Bachelet, said that the findings in the report are “very concerning”, adding “I urge the authorities to take on board our recommendations to ensure the media can carry out their vital work fairly and transparently for the benefit of all Cambodians.

“A free, independent and pluralistic media plays a central role in every democratic society. When we defend media freedom, we defend justice, good governance and human rights”, Ms Bachelet said.

In a media release announcing the publication of State of Press Freedom in Cambodia it was noted that OHCHR Cambodia has documented cases involving 23 journalists who have faced criminal charges for disinformation, defamation, or incitement as a result of their work since January 2017.

The report makes 15 recommendations aimed at providing a safer and more pluralistic and gender-sensitive operating space for media workers, noting that OHCHR stands ready to provide the Government of Cambodia with the necessary support to implement the recommendations.