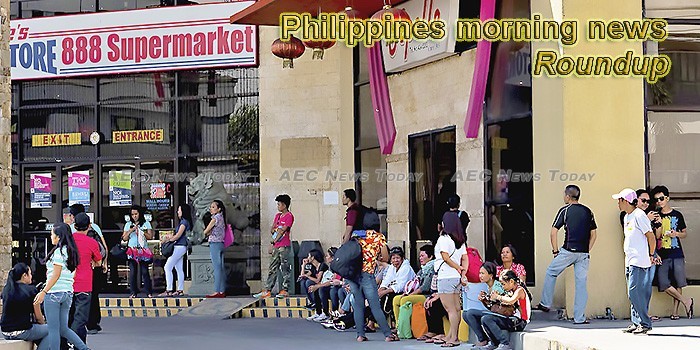 Powering up & switching on: TFSEP2019 to focus on Philippines energy security
Like many other Asean member states the Philippines is rapidly running out of electricity. Demand is expected to more than double to more than over 40,000 megawatts (MW) by 2040, propelled by a rapidly growing population and industrialisation.
AEC News Today (video)

DBM releases P1.323 T budget in 4 months
The government released P1.323 trillion in funds to line agencies in the first four months to support the Duterte administration’s operations and programs under a reenacted budget, according to the Department of Budget and Management.
— The Philippine Star

1.1-M votes for senators nullified due to overvoting
The Commission on Elections (Comelec) on Thursday said they were not negligent in reminding voters not to overvote in the recently-concluded mid-term elections.
— Philippine News Agency

Sandigan affirms denial of Marcos wealth informant’s P29.58-B reward plea
The Sandiganbayan has upheld its decision to deny the motion of a male informant to receive a P29.58-billion reward for exposing the alleged ill-gotten wealth of the late dictator Ferdinand Marcos, his family and cronies.
— GMA News

Sotto: Death penalty now a possibility with more pro-death senators
President Rodrigo Duterte’s wish for a death penalty law now has an increased chance of coming true with the expected election of most of the senatorial candidates he endorsed, Senate President Tito Sotto said on Thursday.
— GMA News

COMELEC tells those seeking suspension of proclamation to file formal petition
The Commission on Elections (Comelec) Wednesday advised those calling for the suspension of winners in the elections due to allegations of fraud to formally file a petition before the poll body.
— Manila Bulletin

PPCRV granted access to audit logs amid delay of poll results’ release
The Commission on Elections (COMELEC) has granted its citizen arm access to transparency server audit logs in the wake of a delay in the release of election results on Monday.
— CNN Philippines

Gov’t urged to pursue cases vs. ‘narco-politicians’ who won in polls
In the aftermath of the just concluded elections, several lawmakers at the House of Representatives on Thursday called on the government to “seriously” pursue cases against winning politicians, who were included on President Rodrigo Duterte’s so-called “narco list,” especially if there are sufficient evidence against them.
— Philippine News Agency

‘Drug money may have been used for vote buying’
DRUG money might have been used to buy votes in the run up to the May 13 elections, the Philippine National Police (PNP) said on Thursday.
— The Manila Times

PH eyes 10 biz deals from Japan
At least 10 business-to-business agreements, including eight letters of intent, will be signed during the visit of President Duterte to Tokyo later this month, Trade and Industry Secretary Ramon Lopez said yesterday.
— Malaya

Comelec calls for sobriety amid video of alleged Lanao fraud
The Commission on Elections (Comelec) called for sobriety on Thursday, May 16, as it investigates a viral video of the alleged pre-shading of ballots in Lanao del Sur.
— Rappler

FDA to set stricter safety, quality standards for vinegar products
The Food and Drug Administration (FDA) said that it will implement a stricter safety and quality standards for vinegar products present in the market, following a recent study that some of the said products are made from synthetic raw materials.
— Manila Bulletin

DOLE online program aims to widen market for informal sector products
TO boost the income of informal sector workers, the Department of Labor and Employment (DOLE) is now extending to them a helping hand to market their products online.
— Business Mirror

More reforms seen with Duterte allies’ win
With the majority of the incoming Senate allied to President Duterte, Capital Economics expects the passage of more economic reforms, even as the London-based research firm warned of looming dictatorship.
— Inquirer.net

Farmers urge winning bets to review rice tariffication law, stop illegal land conversion
The Central Luzon Organic Rice Producers Association (CLORPA) on Thursday urged winning candidates — both proclaimed and who have yet to be proclaimed — to come up with solutions to help low-income farmers in the prospect of losing their livelihood.
— GMA News

Sandiganbayan dismisses graft case vs ex-PRC exec
A former commissioner of the Professional Regulation Commission has won the outright dismissal of his graft case at the Sandiganbayan over the alleged anomalous transfer of the PRC offices in Manila.
— GMA News

Palace: ‘Pragmatic’ voters picked pols in narcolist ‘out of necessity’
People voted “out of necessity” as they picked politicians who were included in the “narcolist” of President Rodrigo Duterte, Malacaang said Thursday.
— Inquirer.net

Port of Manila operations improve amid decongestion: PPA
Operations within the Port of Manila (POM) have started to improve with the removal of many overstaying containers, which has alleviated problems created by congestion.
— Philippine News Agency

Benguet’s Typhoon ‘Ompong’ victims get livelihood assistance from DSWD
At least 952 individuals who were displaced by Typhoon “Ompong” that ravaged northern Luzon in September 2018 received cash assistance from the Department of Social Welfare and Development (DSWD)in Cordillera on Thursday.
— Inquirer.net

DENR intensifies protection of marine species in Sarangani Bay
The Department of Environment and Natural Resources (DENR) in Region 12 has stepped up efforts to protect and conserve marine resources in the critical Sarangani Bay following the recorded stranding and deaths of various species in the area these past months.
— Philippine News Agency

‘Not a cause for concern:’ PPCRV finds small mismatch in election returns
Poll watchdog Parish Pastoral Council for Responsible Voting (PPCRV) is rechecking a small discrepancy between a fraction of physical election returns and electronically transmitted results, an official said Thursday.
— GMA News

PDP-Laban to expel members on narcolist even if they win in May polls
Members of ruling party Partido Demokratiko Pilipino-Lakas ng Bayan (PDP-Laban) named on President Rodrigo Duterte’s narcolist will be expelled even if they win the May 13 polls, the party spokesperson said Thursday.
— GMA News

Ex-US Marine kills 2, suffocates to death in Cebu fire
A former United States Marine killed two persons and then burned his house down, causing him to suffocate to death, in Cebu on Thursday.
— The Manila Times

The deadly odds of pigeon racing in the Philippines
It is a brutal 600-kilometre gauntlet during which competitors face searing heat, wild seas, vicious predators, and the threat of kidnapping.
— FRANCE 24

DENR-Antique to conduct election trash clean-up drive
Immediately after the 2019 midterm polls, some local government units started cleaning up the left-over campaign materials and other election posters, but the Department of Environment and Natural Resource (DENR)- Antique will also see to it that the clean-up drive will be felt even up to the remotest place.
— Philippine Information Agency

Go, Bato, Tolentino to bow down to Duterte in Senate? ‘I doubt it,’ says Sotto
Senate President Vicente Sotto III is convinced that winning senatorial candidates Bong Go, Ronald Dela Rosa, and Francis Tolentino will not bow down to President Rodrigo Duterte’s wishes once they take office even if the Chief Executive had endorsed them.
— GMA News