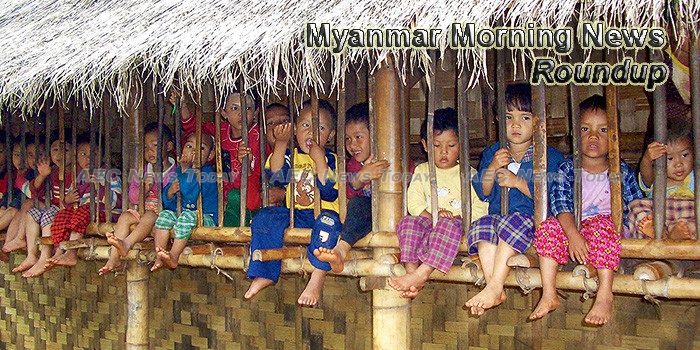 Myanmar faces export problems despite lack of tariffs: minister
Although the country can export goods to the EU, the US, the UK, Japan and South Korea tariff-free, the export sector still faces issues, according to the Minister for Commerce.
– Eleven

India starts work on Trilateral Highway in Myanmar
India has commenced work on a 120-km road inside Myanmar, a road that is part of the India-Myanmar-Thailand Trilateral Highway which is expected to give a massive boost to surface connectivity and trade in Southeast Asia in the backdrop of the Act East policy.
– The Assam Tribune

Farmers Plan to Sue Govt Departments Over Event Cancellation
Farmers set to discuss land rights at Pyin Oo Lwin City Hall today are planning to sue the township and divisional departments for what organizers said was canceling permission to use the city hall the night before the event.
– The Irrawaddy

A week of extremist anger ends with arrests
Eight activists are in custody following a violent clash with residents in Mingalar Taung Nyunt Township on the night of May 9, while several others – including prominent monks – remain at large.
– Frontier Myanmar

Myanmar Ultranationalist Monk Group Denies Involvement in Yangon Scuffle
An ultranationalist monk organization in Myanmar on Tuesday denied that it was involved in a violent confrontation between Buddhists and Muslims last week in a Yangon neighborhood where monks had claimed that ethnic Rohingya Muslims were hiding illegally.
– RFA

Report documents evidence of attacks on Rohingya
A Rohingya advocacy group urged the government of Myanmar on Tuesday to cooperate with a UN fact-finding mission as it presents new evidence of attacks against Muslim civilians in western Rakhine state.
– Pakistan Observer