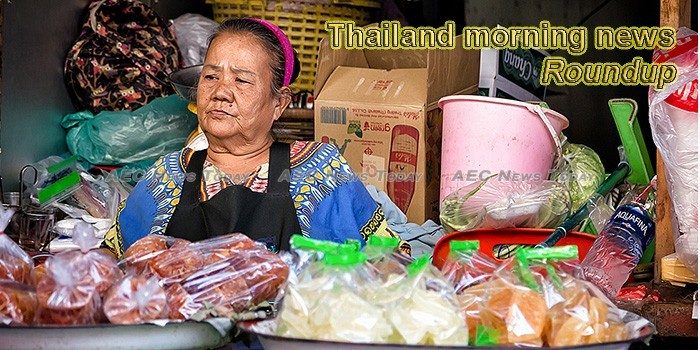 Boats need over 40,000 migrant staff
The Labour Ministry will push for a plan to import 40,000 workers from neighbouring countries to solve a labour shortage in the commercial fishing sector.
— Bangkok Post

Prayut urges re-education of low-skilled workers
PRIME MINISTER General Prayut Chan-o-cha has urged all concerned parties to focus on producing a competent workforce and re-educate low-skilled labour to help the country move into the future.
— The Nation

Prayut dangles perks for business registration
Small and medium-sized enterprises (SMEs) are urged to register their businesses under the juristic person regime in order to obtain a variety of incentives meant to boost their competence.
— Bangkok Post

Labor Minister in talk with protesting fishermen from 22 provinces
The Deputy Prime Minister, Gen. Chatchai Sarikulya, said the Labor Minister, Pol. Gen. Adul Sangsingkeo, has been in contact with a group of fishermen who protest against the planned ratification of the International Labour Organization’s (ILO) Convention 188, with an aim to find a solution for all sides.
— NNT

Non-bank bill set for cabinet
The Finance Ministry looks set to propose a draft bill on supervision of non-bank financial institutions to the cabinet, a measure meant to provide financial consumer protection, says a sourcefamiliar with the matter.
— Bangkok Post

BMW builds X5 in Thailand to counteract U.S. China tariffs: CEO
BMW’s (BMWG.DE) said it is producing between 10,000 and 20,000 X5 sports utility vehicles in Thailand as a way to supply Chinese customers now that imported vehicles from the United States face a 40 percent tariff.
— Reuters

MSDHS sends One Home teams helping flood victims
The Ministry of Social Development and Human Security has dispatched “One Home” team members to assist the people affected by flooding in many provinces across Thailand. The “One Home” teams.
— NNT

PM promises elections next year; presents offering to Supreme Patriarch
The Prime Minister’s itinerary yesterday saw him chair the launch of a Pracharat program for the development of grassroots economies, present an offering to the Supreme Patriarch on the occasion of Buddhist Lent and take part in the 72nd anniversary of the founding of the Bangkok Post, where he confirmed in a speech that general elections will take place next year if all goes according to the national road map.
— News Today (video)

Cave museum ‘ready by New Year’
Construction of both a museum commemorating the rescue of the 12 Wild Boars and a statue of the ex-Navy Seal who lost his life during the mission has begun.
— Bangkok Post

‘Angry Muslim’ father’s online petition inspires Thai activist
The online petition by a UK-based Malaysian Muslim father to ban child marriages has triggered an activist to begin a similar petition to ban them in Thailand too.
— The Nation

Thai Medical Unit certified by Saudi Ministry of Public Health
Saudi Arabia’s Ministry of Health has issued a license, allowing the Medical Office for the Hajj Affairs of Thailand to officially operate in Mecca.
— NNT

Court rejects bail for 8 ex-officials implicated in temple fund scandal
The Criminal Court for Corruption and Malfeasance Cases on Thursday rejected bail requested by five former senior officials of the National Office of Buddhism on the ground that their alleged offences were serious and that they might escape.
— Thai PBS

Thai economy stays on upward trend in June
The Bank of Thailand (BOT) has reported continuous expansion of the Thai economy in June 2018 on the back of exports, tourism, investment and consumption.
— News Today (video)

New SME measures under review
The Industry Ministry is developing new financial measures for small and medium-sized enterprises (SMEs), hoping to encourage them to seek out funding resources.
— Bangkok Post

Phayao gearing up for opening of Ban Huak checkpoint
Phayao Governor Narongsak Osotthanakorn today invited members of the government and private sectors for a meeting to discuss preparations for the opening of the checkpoint in line with a cabinet resolution adopted on July 31.
— Thai PBS

Witness of 2010 Massacre might be tried for another 2 years: lawyer
On 20 July 2018, the Bangkok Military Court called for witness testimony of the Article 112 case, the royal defamation case, against “Waen” Nattatida Meewangpla, a crucial witness in the 6-dead massacre at Pathum temple in 2010.
— Prachatai English

Denied Education, Thailand’s Migrants and Refugees Go Digital
Kyaw Kyaw Naing wakes before the sun to start his first shift at 5am. At 11:30am, he gets a three-hour break before going back to work again until nearly midnight.
— Khaosod English

41 provinces continue to monitor water levels in rivers
The Department of Disaster Prevention and Mitigation (DDPM) has instructed local authorities in 41 provinces across Thailand to be ready to help people in cases of flooding and mudslides.
— News Today (video)

Thailand’s rice producers look to diversify income
Rice is one of Thailand’s top agricultural exports in the international trade. But how does a business dealing with agricultural goods future-proof itself? Saksith Saiyasombut reports.
— Channel NewsAsia (video)

36 Hours in Chiang Mai
Traditionally, tourists have trekked to the star of Thailand’s north in search of M.E.A.T.: markets, elephants, artisans and temples.
— The New York Times

Thailand Morning News For May 15