By Asian Development Bank on October 3, 2019 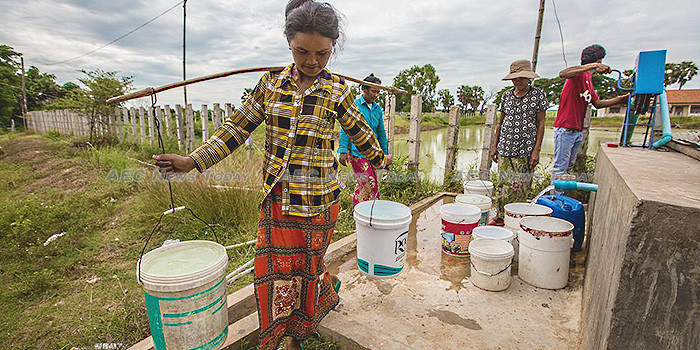 A $49 million financing package from the the Asian Development Bank (ADB) will help the Cambodia Government in achieving its 2025 goal of providing universal access to improved water supply and sanitation services in the country’s rural areas.

The Third Rural Water Supply and Sanitation Services Sector Development Program (RWSSS-SDP) will benefit more than 400,000 people through the construction or rehabilitation of 2,500 rural water facilities in more than 400 villages across 10 Cambodian provinces.

It will also support the construction of new toilets for individual households and construct public latrines at schools and health centers, as well as hygiene and sanitation awareness campaigns.

“Access to basic services, such as reliable water supply and sanitation services, is a basic human right and a vital factor for inclusive and sustainable development in any country”, said ADB urban development specialist for Southeast Asia, Siti Hasanah.

“ADB supports the Cambodia Government’s goal of providing universal access to reliable water supply and sanitation services for all Cambodians in the next five years, particularly those living in rural areas, along with government efforts to raise hygiene awareness”, she added.

Sustainable and reliable water supply and sanitation services remain scarce in Cambodia’s rural areas, where about 77 per cent of the country’s total population of 16.4 million live.

The ADB is the largest contributor to Cambodia’s water supply and sanitation sector infrastructure development, providing about 25 per cent of total external assistance in urban and rural areas.

ADB will also administer a $1 million grant from the High-Level Technology Fund (HLTF) financed by the Government of Japan which will help pilot a project to install air-to-water generation units in seven locations with limited access to safe drinking water, particularly during dry seasons.

ADB is committed to achieving a prosperous, inclusive, resilient, and sustainable Asia and the Pacific, while sustaining its efforts to eradicate extreme poverty. In 2018, it made commitments of new loans and grants amounting to $21.6 billion. Established in 1966, it is owned by 68 members—49 from the region.

This article first appeared on the Asian Development Bank under a Creative Commons License and is produced here with its permission.