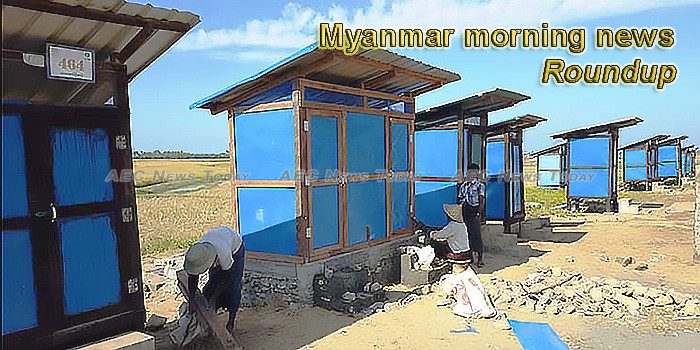 Rohingya repatriation, relocation plans set to be pushed back to 2019: Govt official
Bangladesh’s plans to tackle the Rohingya refugee crisis are set to be stalled until the new year with repatriation and relocation programs only likely be revisited after year-end general elections, a top Bangladeshi official said on Sunday.
— The Irrawaddy

100 Rohingya found off Myanmar’s south coast en route to Malaysia
A boatload of more than 100 Rohingya Muslims who fled a camp in Myanmar were found off the country’s south coast after spending 15 days at sea in a failed attempt to reach Malaysia.
— mizzima.com

210 Myanmar migrants nabbed in Thailand on way to Malaysia
About 210 illegal migrants from Myanmar were arrested by Thai immigration, police, army and Interior Ministry personnel in three separate locations in Ranong, near the Thailand-Myanmar border, from where they would travel and enter Malaysia illegally.
— FMT News

Thailand repatriates 73 trafficking victims to Myanmar
Thailand has sent home 73 Myanmar nationals with aid totalling 146,000 baht after they were rescued from a Myanmar human trafficking ring operating in both countries.
— Bangkok Post

Time to course-correct, Aung San Suu Kyi
Aung San Suu Kyi should emphasize the importance of celebrating diversity rather than stoking the flames of prejudice.
— The Diplomat

Voice of the refugee
There is almost a collective sense of spurious satisfaction in Myanmar over the refusal of the 700,000 Rohingyas to return from the squalid camps of Bangladesh.
— The Statesman

Kachin woman, 60, shot dead as rival EAOs clash in Lashio township
An ethnic Kachin woman was killed on Nov. 17 when fighting erupted between rival ethnic armed organizations (EAOs) outside her village near Lashio Township in northern Shan State.
— The Irrawaddy

Why a land law change is sparking fears of mass evictions
Government paperwork would have you believe that a third of Myanmar’s landmass, totalling almost 50 million acres, is “vacant”, “virgin” or “fallow”.
— Frontier Myanmar

Cambodia genocide verdict a signal to other perpetrators: US
Cambodia’s neighbour Myanmar has come under fire in recent months for its handling of the Rohingya crisis, which United Nations investigators believe amounts to “genocide” given the atrocities perpetrated on the stateless Muslim minority.
— mizzima.com

Malaysia sentences 130 illegal Myanmar workers to prison
Of 156 Myanmar nationals who were rounded up during a crackdown on undocumented workers in Malaysia earlier this month, 130 have been sentenced to three months in prison, a Myanmar diplomat said.
— Myanmar Times

Magwe files charges against fifty villagers in power project protest
Charges were filed with the police on November 10 against 50 people from Sa Gyi village, including a community leader, for interfering with an electricity project, a Magwe regional minister said.
— Myanmar Times

Another betel warning, but is anyone listening?
Chewing betel is proving a hard habit to kick in Myanmar, despite being linked to cancer of the mouth, with the latest campaign to call for abstinence promoting its message on Facebook with the slogan, #StopBetelMyanmar.
— Frontier Myanmar

$31M in jade and gems sold at Naypyitaw Emporium
A recent jade and gems emporium held for local merchants in Myanmar’s administrative capital recorded a revenue of nearly 50 billion kyats ($31.44 million).
— The Irrawaddy

Foreign visitor numbers up despite dip in Western tourists
The Ministry of Hotels and Tourism says Myanmar received more than 2.8 million foreign visitors this year through the end of October, a slight increase compared to the same period last year.
— The Irrawaddy

Myanmar tries to jump-start policy with new economic team
Two and a half years after the Myanmar’s ruling National League for Democracy, led by State Counselor Aung San Suu Kyi, took the reins of government, a ministerial-level economic team appears finally to be up and running.
— Nikkei Asian Review

Why Facebook needs more than technical fixes in Myanmar and beyond
In Myanmar, posts on Facebook have spread hate across the country, and critics say the response by the company has been inadequate.
— devex.com

NLD sues USDP’s by-Election winner in Yangon over bribery claim
A former National League for Democracy (NLD) candidate is suing the opposition party candidate who beat him in the recent by-election in Yangon’s Seikkan Township for breaching the electoral law.
— The Irrawaddy

Bar fire breaks out on Strand Road
A level-2 fire broke out at “Sports Bar” along Strand Road near Botahtaung Pagoda in Botahtaung Township, Yangon Region, at about 9.30 pm on November 18.
— Eleven Media

Solving on-the-ground issues necessary in moving closer to NCA: KNPP
The Karenni National Progressive Party (KNPP), a non-signatory of the Nationwide Ceasefire Agreement (NCA), said solving problems on the ground would help to move forward the process of signing the NCA as well as political negotiations.
— The Irrawaddy

Bhasan Char: Bangladesh builds new Rohingya camp
The Bangladesh government wants to send about 100,000 Rohingya refugees to a muddy, uninhabited island – ‘formed only in the last 20 years by silt from Bangladesh’s Meghna River’ – in the Bay of Bengal.
— myanmarnews.net

Outcry as Zimbabwe supports rights violations in Myanmar
Human rights lawyers and activists have come out guns blazing against the government of Zimbabwe’s decision to vote against a United Nations human rights committee resolution to condemn Myanmar’s persecution of the Rohingya Muslims.
— 263chat.com

Singapore firm to mill rice in Nay Pyi Taw
Golden Sunland Food & Beverage Co, a producer of high-quality rice in Singapore, has started the construction of a rice mill in Nay Pyi Taw with plans to produce 50,000 tonnes a year.
— Myanmar Times

PTTEP to invest in new Myanmar gas fields next year
With fresh oil and gas reserves at Myanmar’s offshore blocks now approved for commercial activities, the Ministry of Energy and Electricity (MOEE) will invite international tenders for up to 31 oil and gas exploration fields in early 2019.
— Myanmar Times

People’s Party will firmly exercise ally relations with other parties
The establishment of the People’s Party was to implement his dream for the previous 30 years.
— Eleven Media

YACL to work with govt in effort to lure European tourists as growth slows
Yangon Aerodrome Company Ltd (YACL) is in negotiations with Lufthansa for the German airline to operate a direct flight between Frankfurt and Yangon.
— Myanmar Times

Parliament approves formation of new investment ministry
Myanmar’s Union Parliament on Monday approved the formation of a new ministry to boost local and international investment and to make that investment socially and environmentally responsible.
— The Irrawaddy

Proposal calls for policy on lighting up rural areas
A Pyithu Hluttaw (Lower House) legislator has called on the government to come up with a comprehensive policy to provide electricity to all villages in the country.
— Myanmar Times

When bagpipes played in Yangon
The early morning of November 11, in Yangon’s Mahabandoola Park was mild and cool and people were relaxing or exercising around the park. In other words, it was mostly an unremarkable day.
— Myanmar Times

Myanmar teachers benefit from Ericsson virtual reality training tool
The deployment of the VR training tool is the latest phase in the Connect to Learn program.
— WebWire (press release)