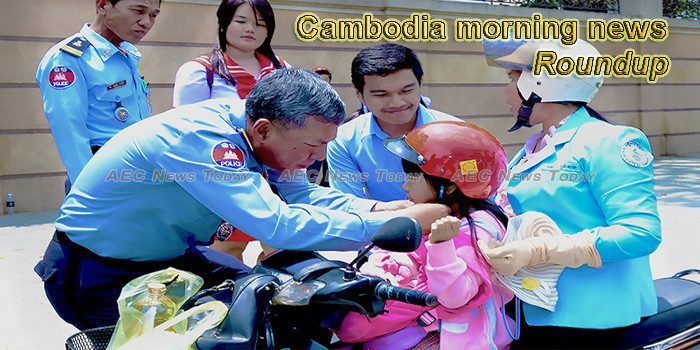 2018: A year marked by historic CPP win
The ruling party won a landslide victory in polls that garnered both criticism and praise internationally, while the EU began the process of withdrawing access to its ‘EBA’ trade deal and Kem Sokha was released on bail.
— Phnom Penh Post

Government ensures workers of their seniority pay
The Ministry of Labour and Vocational Training has told workers not to worry about their seniority payments, which come into effect this year, and requested them not to pay attention to “villainous incitement”.
— The Phnom Penh Post

Reaping new benefits in Temple Town
Despite the general consensus that the property market in Siem Reap has slowed down, many experts are bullish on the potential of the area. In fact, some speculate that the market is simply catching up to changing market demographics.
— The Khmer Times

Drug seizures rise despite drop in arrests
The National Authority for Combatting Drugs yesterday issued a year-end report that showed a 12.5 percent increase in the amount of drugs seized by police, despite a drop in the number of arrests.
— The Khmer Times

Silk centre calls on private sector to take sericulture to the next level
Following a very successful year for the Kingdom’s sericulture sector in which its foundations have been cemented, the silk centre at the Royal University of Phnom Penh is ready for expansion.
— The Khmer Times

Prince Group’s IT building completed
Sihanoukville’s Prince IT Building, described by the developers as a centre for information technology firms, was completed last week.
— The Khmer Times

Families get silt equipment back
More than 100 families from Mkak commune in Kandal province’s Ang Snuol district on Sunday regained five trucks and one tractor impounded by officials from the Ministry of Mines and Energy for unauthorised silt excavation.
— The Phnom Penh Post

UDG denies links to naval base
The vice president of China’s Union Development Group has dismissed reports that it is involved in the construction of a Chinese naval base in Koh Kong province.
— Khmer Times

Angkor ticket sales earn $116 million in 2018
The Angkor Archeological Park, which include the famed Unesco-listed Angkor temples, generated $116.6 million in income from entry tickets in 2018, an 8 percent increase compared with the year before, according to a statement.
— Khmer Times

CSX closes 2018 at all-time high
The Cambodia Securities Exchange (CSX) closed 2018 at an all-time high of 480.98 points, rising 40 percent year-on-year for a market capitalisation of $442.92 million (1.77 trillion riel) on the back of robust trading in the tail-end of the second half of the year.
— Khmer Times

This Filipino family discovers Cambodia as the most family-friendly country
Serif, the son of Cambodia-based Filipinos Camille and Borky Perida, enjoying playtime at the park across the Royal Palace
— www.pep.ph

New airport to be operational in 2020
The Dara Sakor International Airport, in the southwestern province of Koh Kong, to be partially operational by the end of 2020.
— Khmer Times

Craftsman’s palm tree products in Pailin province a huge success
In front of a handicraft workshop in Pursat province, hundreds of sugar palm tree products are displayed on long tables, their uniqueness attracting curiosity from those passing by.
— Phnom Penh Post

Man falls out of plane in Siem Reap
A man who snuck into a plane’s landing gear died after falling 30 metres during take off at Siem Reap International Airport on Monday.
— The Khmer Times

One missing following collapse of Kandal riverbank
One child is missing in Kandal province after he and three of his mates slipped and plunged into the Mekong river as they were playing nearby a recently-collapsed portion of the riverbank.
— Khmer Times

Pig truck tips
Police said a traffic accident caused many pigs to die and wounded many more, but no people were hurt.
— Cambodia News English

Captivating Royal Ballet debuts
The Royal Ballet of Cambodia will showcase its latest grand production Neang Watthana Devi for the first time in Cambodia in January, following performances in Switzerland and the UAE.
— The Phnom Penh Post

A spectacular start at NagaWorld’s 2019 New Year Countdown
It was a star-studded affair at NABA Theatre @ Naga2 on the eve of December 31 as various entertainers graced the stage leading up to midnight. From dancing, singing to live music – there was something for everyone on that magical night.
— The Khmer Times