By Maria Mirasol Rasonable on September 10, 2018 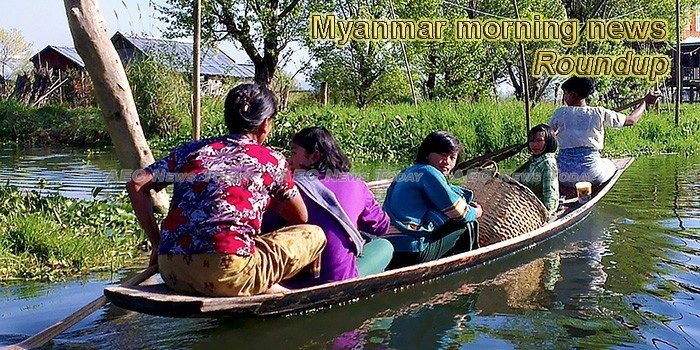 Jakarta Protesters Demand Release of Reuters Journalists Jailed in Myanmar
The jailing of two Reuters journalists who were investigating the Rohingya crisis in Myanmar has not only sparked public outcry in the Southeast Asian nation, but also triggered widespread protests by journalists around the world, including in Indonesia.
— The Jakarta Globe

NGOs do more harm than good in conflict zones
WHILE reading the sex scandals involving Oxfam personnel in Haiti, I remembered past reports implicating UN peacekeepers in the Central African Republic as well as my recent humanitarian venture with the International Committee of the Red Cross (ICRC) in Myanmar and the Democratic Republic of Congo.
— Myanmar Times

Foreigners Suspected of Using Rohingyas to Destabilise Region
The Myanmar government has slammed a ruling by the International Criminal Court (ICC) declaring that they have jurisdiction to investigate the deportation of Rhoyingya Muslims as a possible crime against humanity. In a statement, Myanmar’s President Win Myint dismissed September 6 ICC ruling as based on “faulty procedure” and described it as of “dubious legal merit”.
— InDepthNews

Reuters journalists in Singapore protest imprisonment of colleagues in Myanmar; Singapore Police Force warns public of illegality of public assembly without permit
Following a protest by Reuters journalists and editors outside their Asia-Pacific headquarters at 18 Science Park Drive on Monday (3 Sep), Singapore Police Force (SPF) has issued a warning to the public regarding organising and/or participating in a public assembly without a police permit, stressing that doing so would be illegal.
— TOC

Myanmar Swiftly Rejects ICC Ruling on Jurisdiction Over Abuses of Rohingya
A ruling by the International Criminal Court that it has jurisdiction over the alleged crime of deportation of hundreds of thousands of Myanmar’s Rohingya Muslims to Bangladesh during a military crackdown last year drew a swift rebuff on Friday from the Myanmar government, but was praised by rights groups that want to see those responsible for atrocities against the minority group brought to justice.
— Radio Free Asia

Myanmar welcomes repatriation plan of Rohingya
After facing blistering criticism and outrage from across the world, Myanmar has welcomed the Bangladeshi government’s plan to begin the long-delayed process of repatriating Rohingya refugees back to their homeland.
— TehranTimes

Four Dead in Magwe Coal Mine Explosion
At least four people are dead, one seriously injured and four are still trapped after an explosion in a coal mine in Saw Township, Magwe Region, on Thursday.
— The Irrawaddy

Four years of growing indifference – Regina Catrambone
In southeast Asia, the massive Rohingya exodus pushed over 700,000 people to cross the border from Myanmar into Bangladesh. In August 2017, the stateless Rohingya Muslim community faced a new wave of violence, especially in northern Rakhine province, and newly-arrived Rohingya added to previous flows of desperate individuals.
— Times of Malta

Government Denies Suu Kyi’s Comments Influenced Court’s Decision in Reuters Case
State Counselor Daw Aung San Suu Kyi’s comments in a June interview on the then-ongoing case of two reporters who have subsequently been jailed on charges relating to their coverage of the conflict in Rakhine State did not influence the outcome of their trial, a government spokesman said on Friday.
— The Irrawaddy

Exploring Inwa, a Royal Capital in Ruins
Inwa, formerly known as Ava, was once the royal capital of the mighty Burmese kingdom. The city was founded by King Thado Min Phaya in 1364 at the confluence of the Myint Nge and Ayeyarwaddy rivers.
— The Irrawaddy

After election, press council members target law reform
Incoming members of the Myanmar Press Council want to introduce legal changes so it can do more to protect journalists and media freedom.
— Frontier Myanmar