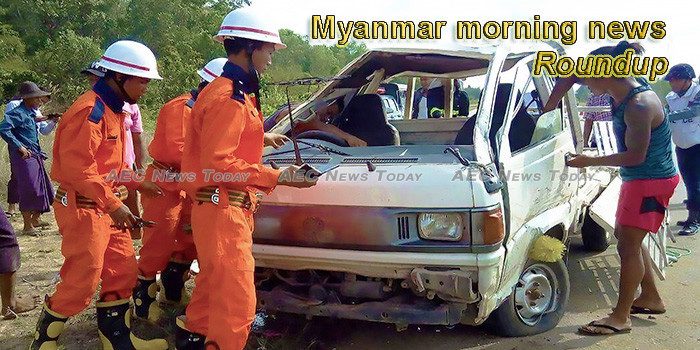 Recovery expected as China executes BRI: OCBC Bank
Myanmar may be in for a tough patch with foreign direct investments declining, inflation rising and global uncertainty adding pressure to the kyat. Yet, recovery may be on the cards as opportunities emerge on the back of policy reforms and the execution of projects related to China’s Belt and Road Initiative (BRI).
— The Myanmar Times

Kachin political leaders discuss Myanmar peace, dam project with Chinese ambassador
Ethnic Kachin leaders from three political parties in Myanmar’s northernmost state have met with China’s ambassador to the country to discuss the faltering peace process in which the Myanmar government is trying to get its military and nearly a dozen ethnic armies to agree to a permanent cease-fire, a party representative said Monday.
— Radio Free Asia

Warning to new credit card users
With the increased use of technology in the financial sector in Myanmar, the number of customers who use credit cards serviced by local banks in cooperation with Visa, MasterCard, and Union Pay has surged.
— Myanmar Business Today

Investing in Myanmar – not when but how
DECADES of stunted development under military rule gave way to Asia’s newest democracy after victory by Aung San Suu Kyi’s National League for Democracy (NLD) in 2015. This, along with the lifting of country-based sanctions by the US government, was supposed to be the turning point for Myanmar, thought to be the “last economic frontier” in Asean.
— The Business Times

First high-rise steel office tower to be complete in 2020
Local property developer Mottama Holdings yesterday held a topping out ceremony for its project, M Tower, which is the first high-rise steel-structured office building in Myanmar.
— The Myanmar Times

Experts say it’s a good time to enter the property market
Property-market watchers say the increasing availability of home loans, the introduction of the Condominium Law 2016, and stable market makes this a good time for those looking homes to start considering taking the plunge.
— The Myanmar Times

Affordable housing expo to be held at Hledan Center
Shwe Property, a local real estate service company, has organized their 13th Affordable Housing Expo, the event will be held from January 4 to January 6 at Hledan Center.
— Myanmar Business Today

Prospects for oil and gas in 2019
A new draft of the petroleum law has been tabled. After the bill is amended, Hluttaw will enact in. However, before in comes into force, it can be amended if the people provide suggestions.
— The Myanmar Times

Deal signed for hydropower project
The Ministry of Electricity and Energy has announced the signing of a power purchase agreement (PPA) for the Upper Baluchaung hydropower project with Neo Energy Oasis Co Ltd, the builder of the project.
— The Myanmar Times

Yangon-Dala Bridge construction expected to be completed in July 2022
Myanmar-Korea friendship bridge, which will connect Yangon and Dala Township, is expected to be completed in July 2022, U Kyaw Thaung Cho, Deputy Director General from the Ministry of Construction, said at the groundbreaking ceremony held on December 24.
— Myanmar Business Today

Myanma Railway is loss making department: Union Minister
Myanma Railway under the Ministry of Transportation and Telecommunications is a loss-making government department, U Thant Sin Maung, Union Minister of the ministry, said at the Amyotha Hluttaw in answering the question of U Pe Tin, a law maker from Mon State’s constituency no.6.
— Myanmar Business Today

Rakhine investment forum to be held at Ngapali Beach
The Rakhine Investment Forum will be held from 21 to 23 February at the Ngapali Beach, state media reported quoting the Directorate of Investment and Company Administration (DICA).
— Mizzima

Finance Minister urges enterprises to keep business records for financial assistance
In order to benefit from financial services, enterprises should keep their business records as well as other important documents, U Soe Win, Minister of the Ministry of Planning and Finance, urged the local businesses at the regular meeting with Vice President and local businessmen held at UMFCCI on December 14.
— Myanmar Business Today

Ooredoo signs MoU For “Community Libraries to Community Center” project across Myanmar
Ooredoo Myanmar, the leading telecommunications provider in Myanmar, has signed a Memorandum of Understanding (MoU) together with Myanmar Book Aid and Preservation Foundation (MBAPF) for the transformation of 150 libraries to community centers across the nation.
— Myanmar Business Today

Myanmar president calls on people to cooperate in peace efforts in new year
Myanmar President U Win Myint on Tuesday called on the country people to give more cooperation and assistance to the government’s efforts for domestic peace, the establishment of the democratic federal union and development.
— Xinhua

Govt urged to keep pressure on squatters this year
The Myanmar government has had some success in tackling the issue of squatters in the country, but the problem is far from solved and will require more efforts this year, say those involved in the efforts.
— The Myanmar Times

The community network as a connectivity strategy for rural and remote Myanmar
Alternative Solutions for Rural Communities (ASORCOM), a community wireless network, was built in the Siyin Valley for 20 villages with around 8,500 people living there. The Siyin Valley is a mountainous region in Chin state in the northwest of Myanmar, with peaks reaching up to over 2,100 metres.
— Rising Voices

Trustees ban offerings of gold leaf at Inle pagoda
The board of trustees at Phaung Daw Oo Pagoda on Inle Lake will no longer allow pilgrims to offer gold leaf starting tomorrow, U Than Win, deputy chairman of the trustees, said.
— The Myanmar Times

Court sentences child rapist to 20 years in jail in Taunggyi
A Man who was found guilty of raping a child was sentenced to 20 years in jail with hard labour by Taunggyi Township Court in Shan State, according to a human rights group.
— The Myanmar Times

China – Myanmar Marathon held in Ruili
A cross-border marathon race between China and Myanmar was held Monday in the city of Ruili, in southwest China Yunnan Province, according to Xinhua.
— Mizzima

What awaits the new year: predictions and wishes
As we leave behind the frustrations and unfulfilled promises of 2018, all of us are looking forward to a brand new year with fresh hopes and wishes that things will be much better than before and our lives will be much more blessed and filled with happiness.
— The Myanmar Times