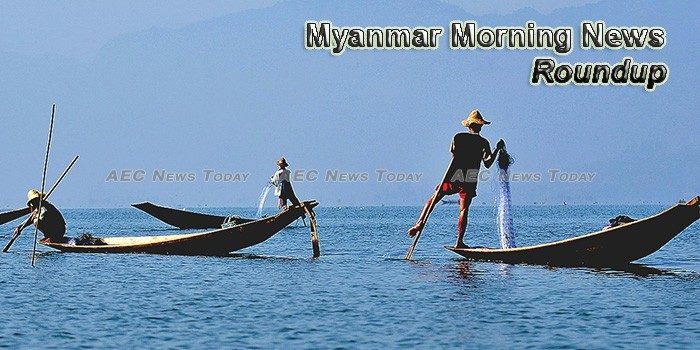 Myanmar Constitution needs reform, says President
Myanmar’s civilian President called in an Independence Day speech yesterday for reform of a military-drafted Constitution and for justice for all recognised minorities under a federal system, but made no mention of the treatment of its Rohingya Muslim people.
— The Straits Times (paywall)

Commentary: Myanmar’s track record left wanting after a year of shattered hopes in 2017
The National League for Democracy (NLD)-led civilian government came to power on a wave of euphoria and exceedingly high hopes less than two years ago, as the first civilian president in five decades was sworn in on Mar 30, 2016.
— Channel NewsAsia

Myanmar to promote local gemstones, jewellery for higher value
Myanmar will hold its first value-added gems and jewellery fair at the Lotte Hotel in Yangon between January 11 and 14, according to the Yangon Gems and Jewellery Entrepreneurs Association.
— Myanmar Times

Friends of arrested Reuters reporter in Myanmar pour out hearts on social media
Ever since Reuters Myanmar reporter Wa Lone was arrested on Dec. 12 on suspicion of violating the Official Secrets Act, friends and former colleagues have poured out their hearts and expressed hopes for his release on social media.
— Reuters

Myanmar pledges to build democratic republic through political dialogue
Myanmar’s civilian president pledged on Thursday to build a democratic federal republic in accordance with the results of the political dialogue, stressing the need to work collectively for writing a suitable constitution for the country.
— Web India123

How the U.S. Can Help Resolve the Rohingya Crisis
Since August, an estimated 650,000 Rohingyas, out of a population of a million, have fled from Myanmar to neighboring Bangladesh to escape a campaign of arson, rape, and murder believed to have been orchestrated by the Myanmar military.
— Foreign Affairs

Aid group projects 48,000 births in crowded Rohingya camps
An international aid agency projects that 48,000 babies will be born this year in overcrowded refugee camps for the Rohingya Muslims who have fled to Bangladesh from neighbouring Myanmar.
— CTV News

Rakhine exodus creates apprehension in India’s northeast
IN THE northeastern Indian state of Assam, the exodus of more than 620,000 Rohingya Muslims from Myanmar to Bangladesh is being closely followed by politicians, officials and journalists.
— Frontier Myanmar

Legal redress for Rohingya: ASEAN’s responsibility
Much has been discussed about the current crisis in Myanmar’s Rakhine state and the consequent exodus of more than 620,000 Rohingya to Bangladesh. Yet there is little to no discourse on what the international community and ASEAN should do after the crisis.
— The Jakarta Post

Myanmar: China, Al Qaeda And Greedy Generals
The Burmese military denies it, but it appears the army response to the August 2017 Islamic terror attacks in Rakhine State were not just about seeking the perpetrators but another of the brutal army operations against civilians.
— StrategyPage

Myanmar criticises US sanctions on military general
Myanmar’s government has spoken out against sanctions placed on a general accused of leading the ethnic cleasning campaign of the Rohingya in the Rakhine state.
— Tamil Guardian