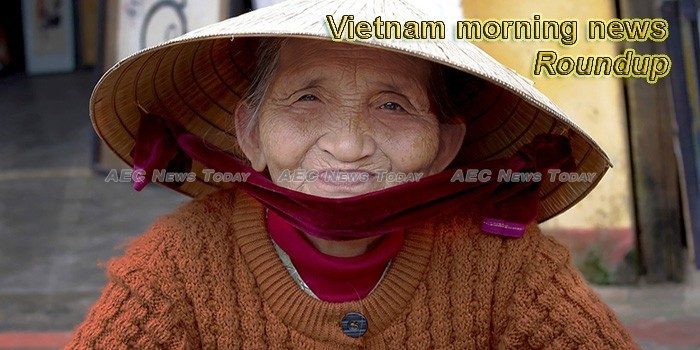 Property sector calls for adjustments to bank loan regulations
The new restriction on banks of using only 40 percent of their short-term deposits for long and medium-term loans should not take effect next year, the Ho Chi Minh City Real Estate Association (HoREA) has said.
— VietnamPlus

Vietnam inflation rate may reach 3.8% in 2018: Brokerage
According to BIDV Securities Company (BSC), fuel and food prices would have the biggest impact on inflation.
— The Hanoi Times

How Facebook Is Damaging Freedom of Expression in Vietnam
Last year, Facebook chief executive Mark Zuckerberg said: “Our job at Facebook is to help people make the greatest positive impact while mitigating areas where technology and social media can contribute to divisiveness and isolation.”
— Gadgets

Tay Ninh attracts 10 solar power projects worth US$862 million
At present, nine out of 10 projects have been under construction, and are scheduled to be completed in June 2019, VietnamFinance reported.
— The Hanoi Times

Vietnam’s Solar Power Market
Vietnam’s energy demand is predicted to increase by over 10 percent by 2020, while energy consumption is projected to increase four-fold by 2030 compared to 2014. To meet the growing demand which cannot be fulfilled by sources like coal and hydro, the government is promoting other renewable sources such as biomass, solar and wind to reduce the gap between demand and supply.
— Vietnam Briefing

More instant coffee brands join Vietnam’s market
The instant coffee market, including capsules and pods, is heating up, but analysts believe there are still opportunities for newcomers.
— Vietnam Insider

Vietnam Airlines and Thales strengthen their partnership with the selection of AVANT IFE onboard the new Boeing 787-10 fleet
Vietnam Airlines has chosen Thales to equip their new B787-10 Dreamliner aircraft with the state-of-the-art AVANT inflight entertainment system. Vietnam Airlines has grown to become a prestigious airline in the region thanks to the strength of its modern fleet and extensive network of routes.
— AEC News Today/ PR Newswire (media release)

Illegally sold prime land plot to be repossessed, auctioned by city
HCMC authorities are set to repossess and auction a 5,000-square-meter plot of prime land that had been sold illegally by local officials.
— VnExpress

Vietnam offers aid to victims of quakes, tsunami in Indonesia
The Vietnamese Government on Tuesday decided to offer US$100,000 in aid relief to help the Indonesian Government and people overcome the consequences of recent earthquakes and tsunami.
— Inquirer.net

Tragedy of errors: Central Highlands farmers peppered with a debt crisis
Farmers’ hopes once climbed high on pepper vines in the Central Highlands; today, they are entangled in debt and misery.
— VnExpress

A muffled cry for freedom in Vietnam
This year has been dire for Vietnam’s harried and harassed pro-democracy movement, with at least 50 activists jailed and many of them severely sentenced since January.
— Asia Times

Vietnam is the most globalized populous country in modern history
Globalization is going through tough times. The UK’s exit from the EU, the rise of nationalist US president Donald Trump and the escalating trade spat between the US and China are stymieing the progress towards a more connected global economy. International trade as a share of GDP fell from 60% in 2011 to 56% in 2016 in another sign globalization’s ill health.
— Quartz