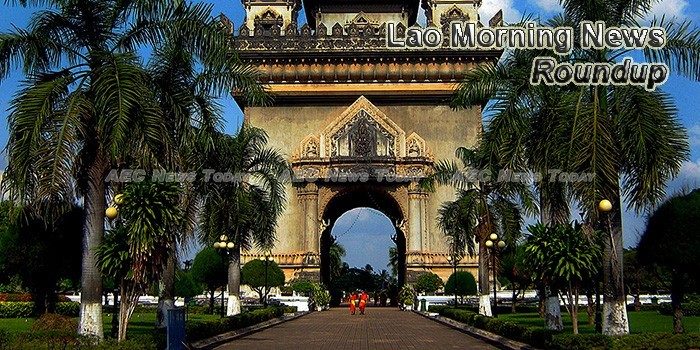 Lao workers’ status upgrades in Thailand behind schedule
Difficulty faced in accessing information by Lao workers in Thailand has been cited as one of the reasons for the slow pace of their registration and upgrade of nationality status in the neighbouring country.
— The Nation

Vietnam, Laos envoys vow close ties
The new Vietnamese ambassador to Thailand on Thursday pledged Vietnam will not allow any groups to launch activities against Thailand, while his Lao counterpart said Laos would maintain good relations with Thailand including security cooperation.
— Bangkok Post

New tourism, hospitality skills initiative launched
Representatives of nine provinces across southern and central Laos met recently to launch an initiative to boost skills among existing employees and support people from disadvantaged backgrounds by giving them employment in the tourism and hospitality sector.
— Vientiane Times

Lao learn the way to sustainable food security
Laos and Brazil have held discussions on the sustainability of school meal programmes, including the experiences of Laos in this field, and explored opportunities for South-South cooperation in achieving food and nutrition security.
— Vientiane Times

Lao film industry finding its feet on international stage
Despite working with limited funds, the spectre of state censorship and the difficulty of only having three working cinemas in the country, local directors are creating a thriving film industry in Laos
— Sea-Globe

Fourteen fatalities recorded last year as dengue fever bites
Fourteen people died in a nationwide outbreak of dengue fever in early 2017 with the capital having the most cases last year.
— Vientiane Times

Hotline helps government administration
Hotline calls have helped the government gain a better understanding of public concerns allowing it to address their problems in accordance with the facts.
— Vientiane Times

S. Korea Donates US$26,400 Helping Children With Cancer In Laos
The Ministry of Health represented by the Children’s Hospital signed on Feb 16 an Memorandum of Understanding with the Korean Association for Children with Leukaemia and Cancer on a medical project designed to benefit children with cancer in the Lao PDR.
— Lao News Agency