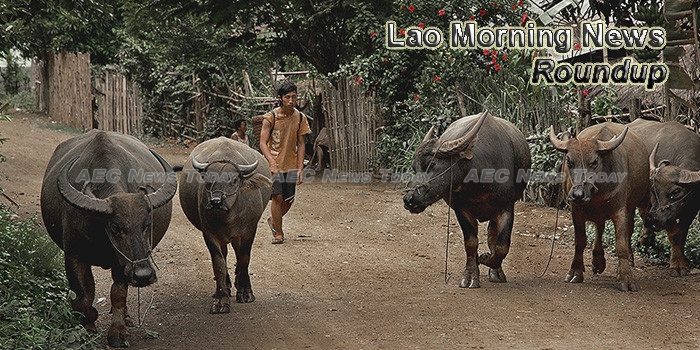 Govt aiming for trade surplus next year
The government has forecast that Laos will record a trade surplus of US$37 million next year due to various factors further boosting exports.
— Vientiane Times

Trademark protection awareness, registration remain low in Laos
The number of trademark registrations is lagging in Laos as many businesses lack understanding of their rights and fail to register to protect their intellectual property, according to the Intellectual Property (IP) Department under Ministry of Science and Technology on Monday.
— Xinhua

Neighbourly diplomacy shifts from Laos
The twists and turns of Thailand’s diplomacy toward its neighbouring countries have recently undergone a metamorphosis. The military’s seizure of power from the elected government in May 2014 allowed civilian decision-makers and security officers to reboot ties with the bordering countries. But not all such attempts have been successful.
— Bangkok Post

China, Laos Hold New Defense Meeting
Over the weekend, China and Laos held the first iteration of a new defense consultative mechanism. The convening of the so-called high-level frontier meetings, led by the defense ministers of both sides, has been billed yet another step in the development of security ties by Beijing and Vientiane despite some of the recent challenges inherent in the relationship.
— The Diplomat

Japanese support serves up school meals in seven provinces
The provision of nutritious school lunches in seven provinces will proceed with support from the Government of Japan which is set to provide US$3.2 million in assistance for the fiscal year 2017-18.
— Vientiane Times

Malaysia gathering celebrates Vietnam-Laos relations
The embassies of Vietnam and Laos in Malaysia together have hosted a gathering to mark the 55th anniversary of the two countries’ diplomatic ties and the 40th year of the Vietnam-Laos Treaty of Amity and Cooperation.
— Vietnam Plus

National seed policy takes root
The government is preparing to formulate a National Seed Policy to ensure that farmers can obtain suitable and good quality seeds for the purposes of food security, nutrition, and overall improved living conditions.
— Vientiane Times