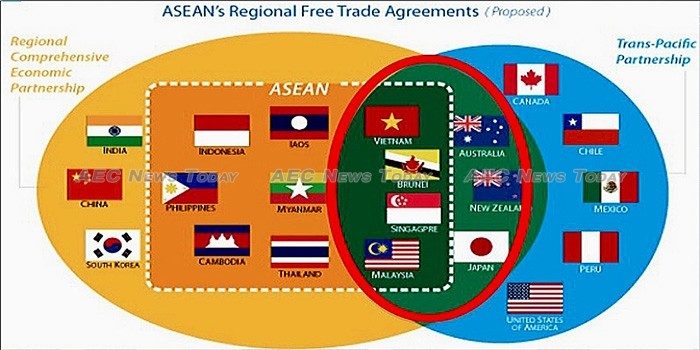 US President Donald Trump’s executive order to withdraw the United States from the 12-member Trans-Pacific Partnership (TPP) agreement in the Asia Pacific is a strategic turning point in the open economic order. It is a blow to furthering reform for some members, a lost opportunity for the United States to write the rules of international commerce, and more worryingly, a sign of the United States turning its back on the global economic system it helped create and lead.

Mr Trump and his trade team favour bilateral deals instead of regional agreements. US negotiations with Europe are therefore likely headed for the same fate as the TPP. With major multilateral trade deals at the World Trade Organization (WTO) now too difficult and bilaterals only making slow progress towards freer markets — one of the reasons for the shift towards ambitious regional agreements — all eyes now turn to Asia’s Regional Comprehensive Economic Partnership (RCEP) agreement. It is now the most important initiative on the global trade scene.

Comprising the ten Southeast Asian members of Asean as well as Australia, China, India, Japan, New Zealand, and South Korea, the awkwardly named RCEP has received much less attention than the TPP and is shrouded in misconceptions.

The first misconception is that RCEP is China-led or China dominated. But China is a spoke and Asean is the hub. The RCEP was built to consolidate Asean’s five separate free trade agreements with China, South Korea, Japan, India and Australia-New Zealand. And the RCEP idea and its guiding principles were crafted in Indonesia… not in China.

Asean centrality has also ensured that the RCEP has incorporated Asia’s other large power — Japan — and reflects Japanese preferences as much as those of China.

Originally China wanted to limit core membership of Asian cooperation to Asean plus China, Japan and South Korea. Japan wanted a larger membership, involving Australia, New Zealand, and India to help provide a counterweight to China. In the end, Asean centrality and the interests of Australia and India in the region meant the broader grouping prevailed.

The fear that the demise of the TPP will lead to China writing the rules of trade and commerce in the Asia Pacific is therefore far-fetched. Allowing China to write the rules would require Asean, Australia, Japan, and India to all acquiesce to China’s demands.

The second misconception is that the RCEP is a low-standard agreement that will not shape commerce to any serious extent within the grouping, let alone beyond it. But that is yet to be determined and completely misreads the potential of the agreement.

The RCEP grouping is already larger than the planned TPP grouping in purchasing power parity terms — the correct way to compare economic size (See: With TPP Trumped, Finalisation of RCEP More Urgent as War Drums Beat). The East Asian grouping is also more dynamic, with an average growth rate much higher than the world average.

China, India, Indonesia and many of the developing countries in the RCEP still have high barriers to trade and investment. Relatively easy liberalisation will therefore deliver large gains, not only to those countries, but also to the more developed members in the RCEP who do business with them.

And an agreement that has those countries commit to liberalisation and reform will be a fillip to global trade growth and openness at a time when it is sorely needed.

RCEP at a Cross Road

We are now at a crossroads for the RCEP and whatever agreement that does evolve will have important economic and strategic implications for the Asia-Pacific region.

Economically the RCEP will do best if it can reduce significant barriers to trade and investment, further trade facilitation, and support countries’ domestic reform efforts. Thankfully these outcomes are not mutually exclusive, but are interdependent and reinforcing.

Ambitious commitments do need to be made in traditional areas such as tariff cuts and investment liberalisation for the agreement to be credible. But for the RCEP to have a significant effect countries will need to commit to measures behind the border — not just at the border — such as regulatory reform, breaking down market entry barriers, and equal treatment of foreign firms domestically.

East Asia’s diversity — including in countries’ systems of government — has led to an Asian way of cooperation that requires forging consensus around principles of cooperation.

This is not sexy, but the history of Asia’s integration into the WTO and  Asia-Pacific Economic Cooperation (APEC) shows that it is effective and can be sustained. This form of cooperation would mean moving towards regulatory harmonisation over time, instead of imposing overly prescriptive and inappropriate rules at the starting line, which was the method adopted by the TPP.

Strategically, how the RCEP evolves will determine whether trade becomes a force for cooperation and integration across the wider Asia-Pacific region, or a cause of rivalry and economic fragmentation.

The RCEP grouping could decide to pursue an agreement that seeks to extend its economic benefits to the United States and other non-RCEP members. This would help to reduce the perception that the RCEP is a China-led bloc designed to erode US economic leadership in Asia, and would be the best way of encouraging the US to maintain its economic commitment to Asia, which was always one of the core goals of the TPP.

The RCEP is now the best path towards a Free Trade Area of Asia and the Pacific. With the world trading system under threat it is time for leaders in Asia to step up and push for opening markets and deepening reforms to enhance economic integration, not just with each other but with Europe, the United States and the rest of the world.