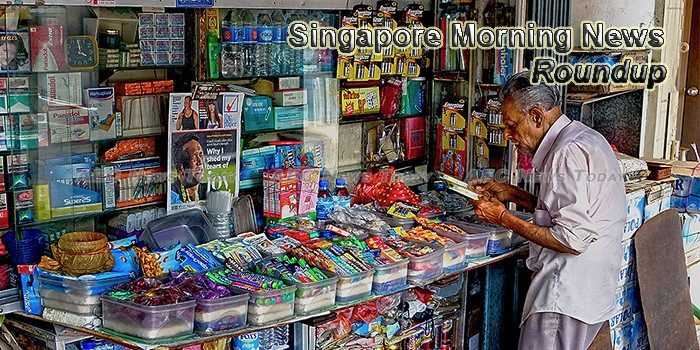 Singapore-Thailand Defense Relations in the Spotlight With Ng Visit
This week, Singapore’s Defense Minister Ng Eng Hen is in Thailand for a three-day working visit. Ng’s trip has put the Singapore-Thailand defense relationship in the spotlight from a bilateral as well as a broader regional perspective.
— The Diplomat

Singapore’s Central Bank Chief Has a Warning for Fintech Investors
That’s the message Monetary Authority of Singapore Managing Director Ravi Menon has for pundits and investors trying to navigate the wave of technology euphoria sweeping the financial services industry.
— Bloomberg

Cyber security critical concern of Singapore companies but not ranked high in board focus: Survey
While cyber security is a major concern at nine out of 10 boards in Singapore, it is not part of strategic discussions at board level.
— The Straits Times

Singapore, Thailand to step up maritime cooperation and counter-terrorism efforts
Singapore and Thailand has vowed to work together in areas of mutual interest such as maritime security, counter-terrorism and cybersecurity, the Ministry of Defence (MINDEF) said in a news release on Monday (Nov 6).
— Channel NewsAsia

Higher fines for serious workplace safety lapses
The maximum penalty for safety breaches that could potentially cause death, serious injury or a dangerous occurrence will be raised from S$20,000 to S$50,000.
— Channel NewsAsia (video)

Singapore Revokes Transocean Oil’s Bunker License Over Falsification
The Maritime and Port Authority (MPA) of Singapore is revoking the bunker fuel supply license of Transocean Oil at the port of Singapore, effective immediately, after finding “falsifications of records and discrepancies,” MPA said on Monday.
— Oil Price

Collective sale fever may not lead to higher prices
The recent collective sale frenzy will not necessarily result in higher prices for condominium buyers down the road, Minister for National Development Lawrence Wong said in Parliament yesterday.
— The New Paper

Singapore banks may be past worst of O&G battering
WITH DBS taking a huge provision for its oil-and-gas (O&G) exposure in the third quarter, there is increasing chance that the worst could be over for the lenders from O&G pain.
— The Business Times

Visitor arrivals, spend up in 1H; uptrend likely to continue
IN another boost to the economy, tourism receipts and visitor arrivals both grew in the first half of this year, with prospects appearing bright for the second half as well.
— The Business Times

Smartkarma raises US$13 million for overseas expansion
SINGAPORE-based Smartkarma, a subscription-based marketplace for investment research, has raised US$13 million (S$17.7 million) to expand its sales and distribution overseas.
— The Business Times