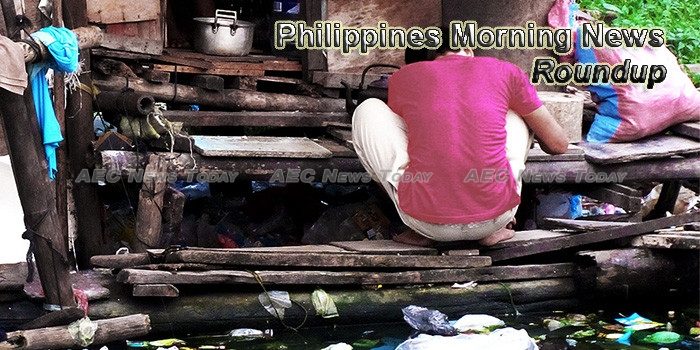 Foreign Investors Shun Philippines for 4th Straight Quarter
Foreign investors are sending an increasingly strong message to Philippine President Rodrigo Duterte over his ‘war on drugs’ and at times outrageous and crude comments. And it is a message that doesn’t bode well for the Philippine economy.
— AEC News Today

Philippine stocks lead SE Asia peers ahead of Fed outcome
Philippine stocks rose as hopes of a tax reform package boosted sentiment, while most Southeast Asian stock markets fell on Wednesday as investors trimmed positions ahead of the outcome of a US Federal Reserve meeting.
— Bangkok Post

Duterte orders cops: Kill my son if he’s involved in illegal drugs
President Rodrigo Duterte on Wednesday said he had ordered the police to kill his son, Davao City Vice Mayor Paolo Duterte, if they should catch him being involved in the illegal drug trade.
— Inquirer.net

Peso slips ahead of Fed decision
THE PESO weakened versus the dollar yesterday, with the sideways move ending a two-day rally amid market cautiousness ahead of the results of a monetary policy meeting in the United States.
— BusinessWorld Online

8-mo BOP deficit widens to $1.39B
The country’s balance-of-payments (BOP) position in August remained at a deficit, although at a narrower $7 million, amid the “ghost” month in stock market trading.
— Philippine Daily Inquirer

House approves LGBT rights bill on final reading
The House of Representatives on Wednesday approved on third and final reading a bill that aims to protect the rights of the lesbian, gay, bisexual, and transgender (LGBT) community.
— ABS-CBN

Government debt payments more than double in July
The national government spent P99.66 billion in July to settle its debt, a sharp 136 percent increase from P42.08 billion in the same period last year, the Bureau of the Treasury (BTr) reported yesterday.
— The Philippine Star

Duterte raises bounty for arrest of drug cops to P3M
President Duterte is raising the reward money for individuals who can identify or provide information on police officers who are directly involved in the illegal drugs trade or are coddling drug syndicate leaders.
— Manila Bulletin

Apparel company faces criminal charges for P2M worth of smuggled glutinous rice
WORLDWIDE APPAREL Manufacturing, Inc. will be slapped with criminal charges after the Bureau of Customs (BoC) busted on Wednesday a 20-footer container consigned to the company containing P2 million worth of glutinous rice but declared as “polyester knitted breast cup.”
— BusinessWorld Online

House restores budgets of CHR, NCIP, and ERC
The proposed budgets of three agencies next year, which shrunk to P1,000, will be restored after all.
— CNN Philippines

Judge accused of sitting on shabu case
The Philippine Senate Blue Ribbon Committee has threatened to subpoena a judge for the latter’s failure to order the destruction of 890kg of shabu (methamphetamine hydrochloride) seized by authorities during a drug raid in San Juan last December, The Manila Times Online reported on Wednesday.
— Thai PBS

IFAD to aid Philippines in raising agriculture exports
International Fund for Agricultural Development (IFAD), together with Southeast Asian Regional Center for Graduate Study and Research in Agriculture (SEARCA), will put in millions of funds in order to assist small Filipino farmers raise their exports as well as deal with the huge trade imbalance between the Philippines and other rich countries.
— Fresh Plaza

DBM wants cops, soldiers to fund their own retirement
Every year, the government allocates P90 billion in the national budget for the retirement fund of soldiers and policemen.
— Rappler

Duterte scraps foreign travel restrictions
President Rodrigo Duterte has scrapped restrictions on foreign and local travels for state workers, saying the government is in better fiscal state now and no longer has to scrimp.
— The Manila Times

Microchip project for dogs in Makati
The city government of Makati is set to launch a citywide microchipping program for an estimated 32,000 dogs.
— Manilasatndard.net

MSMEs urged to export to EU
EUROPEANS want to see more small and medium enterprises (SMEs) from the Visayas exporting their products to Europe in a bid to boost trade.
— Sun Star

Customs discovers P2M worth of rice in shipment declared as bra cups
The Bureau of Customs busted today a 20-footer container of glutinous rice with estimated cost of PHP2 million. Confirmation was made after a 100% physical examination of the shipment of Worldwide Apparel Manufacturing Inc.
— Update Philippines

Philippines Emerges as Southeast Asia’s Lone Rate Hike Candidate
With Indonesia and Vietnam cutting interest rates in the past two months and Thailand fending off pressure to do the same, the Philippines is emerging as the region’s lone candidate for a rate increase this year.
— Bloomberg

Davao raising P30M for PH’s biggest Ironman race
The city government of Davao is set to raise P30 million for what is touted to be the biggest triathlon competition in Asia next year.
— Davao Today

99% of Filipino workers will soon receive higher take home pay
Ninety-nine percent of Filipino workers will soon enjoy higher take home pay when the income tax system will finally be amended two decades after it was enacted, Senator Sonny Angara said. Under the Senate ways and means committee report, the first P150,000 annual taxable income will be exempted which means Filipino earning P25,000 per month with four dependents will be exempted from income tax.
— Update Philippines