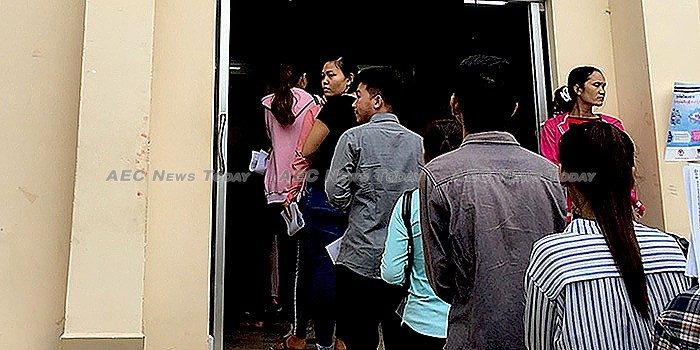 Cambodia employers who fail to register their workers for universal healthcare with the country’s National Social Security Fund (NSSF) before the end of this year will face fines of US$100 per employee when detected and could be subject to law suites by employees requiring medical treatment and not covered. Moreover, complying with the new rules is set to try the patience of even the most Zen employer.

The requirements for the new scheme were explained to AEC News Today on December 25 by an NSSF employee who requested anonymity because she was not authorised to speak to the media, and paint a grim picture for business owners in Cambodia who think they can continue flying under the regulatory radar.

The move to universal healthcare for all Cambodia workers in the formal employment sector was announced last August by Prime Minister Hun Sen and signed into law last month by Ith Sam Heng, Minister of Labour and Vocational Training. Under an unofficial amnesty employers have until December 31 to register their staff, or face fines of Rl400,000 (about US$100) for each unregistered employee when detected.

The scheme extends the country’s universal healthcare for formal sector workers from the previous minimum number of eight employees down to enterprises employing just one, and provides workers with hospital and medical cover in public medical facilities for work and non-work related injuries, in addition to general illnesses (See: Hun Sen’s New Year Gift: Universal Healthcare For All Cambodia Employees).

Comply or be Fined, Possibly Sued

The compulsory inclusion of all formally employed workers in the universal healthcare scheme comes against a backdrop of increased ‘carrot and stick’ compliance tightening in Cambodia aimed at broadening the tax base and ensuring small and medium enterprises (SMEs) meet their regulatory obligations.

For those who think they can continue flying under the radar the news is bad.

According to the NSSF staffer, when someone goes to a hospital for treatment “they will be asked for their NSSF card. If they can not produce an NSSF card the person will have to pay all of their own medical and hospital bills.

“If they have an employer that information will be forwarded to the NSSF and we will go and see the employer; but because it is now law for all [formal sector] employees to be enrolled in the NSSF, employees will be able to sue their employers to pay for all of their medical and hospital expenses if they are not enrolled when they should be.

Demonstrating how recent regulatory changes are coming together to create an integrated regulatory framework, employers need to produce a current tax patent (tax registration certificate), which costs between Rl400,000 ($100) and Rl 5,000,000 ($1,250) per year from the General Department of Taxation (GDT) in order to register their staff for NSSF coverage.

“If employers can’t register their employees because they don’t have a tax patent then they will need to sort that out with the tax department”, the NSSF officer said.

According to the GDT, enterprises that have been trading without a tax patent will be fined Rl2 million (about US$ 500) per year of business without the document, to which interest of 10 per cent plus 2 per cent per year calculated monthly over the entire time period will be added.

#131 For Ease of Doing Business For Good Reason

It’s not for no good reason that Cambodia is ranked 131 out of 190 countries globally by the World Bank for ease of doing business, and it is doubtful if the registration process for the expanded NSSF scheme will see that score improve (See: Ease of Doing Business: Indonesia Leads the World in Reforms).

In addition to each employee having to attend the NSSF office to have a photograph and both thumb prints taken, after registration each business enterprises must then send a representative to a training session (with a USB stick) to learn how to process the monthly submissions and obtain the necessary document templates for doing so.

Just to add to the confusion for foreign employees and employers, all of the instructions — and the registration form — are in Khmer language only.

The NSSF officer acknowledged that the process was not particularly smooth at the moment “because of the number of people needing to register”, but said it is hoped this will be eased next month when a new NSSF employee registration office opens on Wat Samrong Andeth Road in Sen Sok District, some thirty minutes or more drive from the current downtown location.