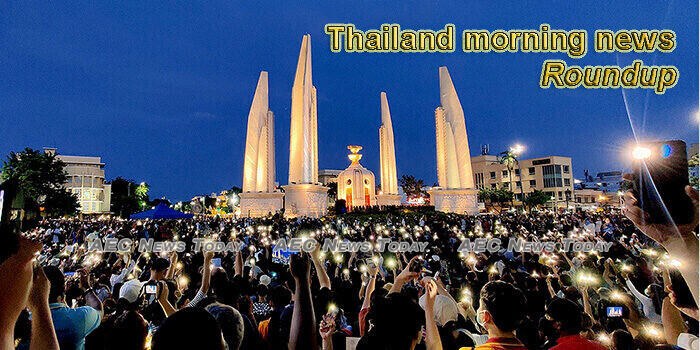 All charges dropped against Red Bull heir accused in death of police officer, Thai Police say
Charges have been dropped against the heir to the Red Bull energy drink empire, Vorayuth Yoovidhya, relating to a crash that killed a policeman in 2012, Thai police say, in a case that drew attention to the power of wealthy Thais.
— CNN

Govt prepares Bt600m budget to buy UK vaccine
The government is planning to spend Bt600 million to buy doses of the Covid-19 vaccine being developed by Oxford University in the UK.
— The Nation

A second wave can be quelled, say health bigwigs
Thailand will be able to handle and curb a second wave of Covid-19 as lessons have been learned from the first outbreak, say senior public health officials.
— Bangkok Post

Bosses raise alarm over Covid costs
An employers group has cried foul over what it calls the steep costs for quarantining returning migrant workers, saying this places too much strain on employers already struggling from the Covid-19 pandemic.
— Bangkok Post

Thailand’s flight ban might extend
The Civil Aviation Authority of Thailand (CAAT) has hinted at the possibility of extending the international commercial flight ban according to the National News Bureau of Thailand.
— TTR Weekly

Farmers disgusted with agriculture minister’s performance, demand replacement
Some 30 farmers showed up at Government House on Thursday (July 23) to demand that Prime Minister Prayut Chan-o-cha replace Agriculture and Cooperatives Minister Chalermchai Sreeon and Deputy Minister Mananya Thaiset because they failed in their job.
— The Nation

PM plays down rejig talk
Incoming ministers will be given up to one year to prove their worth in the yet-to-be finalised cabinet reshuffle, Prime Minister Prayut Chan-o-cha said.
— Bangkok Post

Tourism Minister Wants to Revive Coronavirus ‘Travel Bubble’
The tourism minister on Thursday said he wanted to renew a push for an agreement that would allow travel exchanges with countries where the coronavirus pandemic is under control.
— Khaosod English

Slump in local car sales continues
Domestic car sales shrank for a 13th straight month in June, dropping 32.6% from a year earlier to 58,013 vehicles, as the coronavirus outbreak hit demand, the Federation of Thai Industries said on Thursday.
— Bangkok Post

Fears over labor abuse for Thai workers in Israel underlined by IOM withdrawal
Labor and human rights activists sounded the alarm over possible grave labor abuse cases under the bilateral agreement between Thailand and Israel, as the United Nations Migration Agency (IOM) will no longer participate in the labor and migration processes.
— Sawadee Siam

Young Thais call for government to resign in night protest
Holding up messages on their tablets and waving their cellphone torches, hundreds of young protesters rallied on Thursday to demand the Thai the government resign and dissolve parliament, defying a coronavirus ban on gatherings.
— CNA

Gulf and BGrim ‘unaffected’ by ADB’s Bt9.64bn sell-off
Chief executives of Gulf Energy Development (Gulf) and BGrim Power (BGrim) insisted today that operations would not be affected by the Asian Development Bank (ADB) selling stocks worth a total Bt9.64 billion in the two energy companies.
— The Nation

Thailand Needs a Shakeup to Emerge From Covid War
Thailand has been playing by the rules and getting little benefit from obeying economic orthodoxy.
— Yahoo Finance

Monarchy off limits, students told
Student activists who have been rallying across the capital must refrain from mentioning the monarchy or else they will face a public backlash, warned Jatuporn Prompan, chairman of the United Front for Democracy against Dictatorship (UDD).
— Bangkok Post

Move to designate Phuket hotels as Alternative Local State Quarantine venues underway
So far 14 hotels in Phuket have applied to be designated as “Alternative Local State Quarantine” (ALSQ) in order to accommodate people allowed to enter the country under the conditions set by the Centre for COVID-19 Situation Administration (CCSA).
— The Phuket News

DIT rolls out multi-step measures to tackle pork price surge
The Department of Internal Trade has asked the Swine Raisers Association of Thailand and other sellers to put a cap of 80 baht per kilogram on the sale of pigs, in order to maintain pork pricing at butcheries at no more than 160 baht per kilogram.
— Newsline (video)

Thailand will gift Cambodia with 140 km of rail for stronger link
Cambodia will soon welcome another 140km of northern railway to connect to the Thai border to better facilitate the transportation of goods between the two countries.
— Inquirer.net

City council panel to vet 76.4bn annual budget
The Bangkok city council has appointed a committee to scrutinise its annual expenditure budget for the next fiscal year, which is valued at 76.4 billion baht, says the Bangkok Metropolitan Administration (BMA).
— Bangkok Post

Communities call on Wissanu to continue with local power plant projects
Some 10 representatives of community enterprises from the East and Northeast went to the Energy Ministry on Thursday (July 23) to submit a letter to acting minister Wissanu Krea-ngam asking that the community-based power plant projects be pushed ahead as they will generate a minimum revenue of Bt120 million as well as supply 3 megawatts of energy to communities.
— The Nation

Thailand: Banks extend helping hand to over 10 million debtors
Banks have provided financial aid worth a total of Bt6.7 trillion ($211.7 billion) to more than 10 million debtors suffering from the impact of Covid-19, while some believe 70 percent of the borrowers will repay their debts once the aid package comes to an end.
— Inquirer.net

DSI seeks DNA from Japanese man to shed light on cold-case murder
The Department of Special Investigation (DSI) will seek DNA samples from a man in Japan to compare with genetic material found on the clothing of a Japanese woman slain in Sukhothai Historical Park in 2007.
— Bangkok Post

Migrant labour from neighbouring countries now allowed to return
The Ministry of Labour has been given the nod to allow migrant labour into the country and it has clarified on the guidelines. Department of Employment director-general Suchat Pornchaiwiseskul said that the Centre for Covid-19 Situation Administration (CCSA) on Wednesday had approved bringing foreign labourers from Cambodia, Laos, Myanmar and Vietnam to work as per the Department’s proposal.
— The Nation

University students defy ban, hold protest
With anti-government demonstrations flaring up around the country, a bid by the dean of the Mahasarakham University to prevent one there failed yesterday as students defied his ban and went ahead with their protest.
— The Thaiger

11 Soldiers Returning From Hawaii Develop Symptoms: Army
The army on Thursday said 11 of the 140 Thai soldiers returning from a military exercise in Hawaii were put in hospitals for observation, and the rest were placed in a hotel quarantine.
— Khaosod English

Extension to visa amnesty to be published in Royal Gazette
Foreigners in Thailand can breathe a sigh of relief as government spokesperson Traisuree Taisaranakul confirms the Cabinet has agreed to extend the visa amnesty until September 26.
— The Thaiger

Female doctor resigns after hospital attack; director suggests “gold shop security”
The director of Vibharam-Chai Prakan Hospital in Samut Prakan, just south of Bangkok, says he may need to upgrade security to that used by gold shops to protect hospital staff.
— The Thaiger

Two monks injured when crematorium explodes at Banglamung temple during funeral in Pattaya
Two monks, who are real life brothers, were injured during a funeral at Banglamung Temple today when the crematorium suddenly exploded.
— The Pattaya News

Transport Ministry says they still want to negotiate the 24 billion baht Hopewell pay-out
Driving out to Don Mueang Airport it’s difficult not to notice the new BTS line that now extends from Mo Chit and past the airport.
— The Thaiger

Hospital steps up security after gang fights
Following incidents at two hospitals in greater Bangkok in which three staff were injured, Udon Thani Hospital has set up a new security system to prevent damage from brawls between the northeastern province’s rival gangs.
— The Thaiger

Thailand’s ‘Cannibal Killer,’ six decades a museum oddity, laid to rest with prayer
Si Quey Sae-Ung was returned today to the same place he was shot to death by a firing squad 61 years ago.
— Coconuts Thailand

Phase 6 of re-opening to see thousands of foreigners granted entry to Thailand
A number of additional categories of foreigners will be able to apply to re-enter the Kingdom.
— The Thaiger

Suspect in Lumpini snatch case also charged with murder
A van driver arrested shortly after a woman was abducted near Lumpini Park in the early hours of Tuesday has been charged with illegal detention and murder, after the victim’s valiant boyfriend died from injuries received trying to rescue her.
— Bangkok Post

Lumphini Park’s serial rapist arrested, admits to all accusations
An alleged serial rapist who preyed on Lumpini Park sex workers has been arrested and the van he allegedly used in a Tuesday abduction and homicide recovered.
— Coconuts Thailand

5 new members of Thai PBS Board of Governors elected
A former senator, a social activist, a journalist, a flood management expert and an economist have been chosen as the five new members of the board of governors of the Thai Public Broadcasting Service (Thai PBS).
— Thai PBS News

Chiang Mai restaurant fined 50,000 baht for promoting alcohol in buffet menu
A Japanese buffet restaurant in Chiang Mai has posted a warning on their Facebook page following their chef’s arrest for including beer in a 499…
— Sawadee Siam

Run Away From Pandemic at Bang Sean Marathon
A marathon set to be held this November will go ahead even though the prospect of border reopening remains dim, the organizer said Wednesday.
— Khaosod English