The Asian real estate market has witnessed slower growth so far in 2016 and will continue to do so as the year progresses. According to CBRE torpid growth, greater uncertainty regarding China and its growth, and possible interest rate changes hint towards greater caution in short-term real estate strategies. It is expected, however, that investment demand will stay afloat amid high liquidity and probable long-term growth.

The commercial real estate investment volume for the first half of 2016 (H1 2016) stands at $53.6 billion, a 4 per cent decrease on the same period in 2015. A report by JLL states that while it is still too early to judge the real impact of the Brexit referendum on Asia real estate investment, general market volatility and uncertainty mean that investors will look for regional safe-havens.

Property prices and optimism for future investments are also on the rise in Myanmar, while recent policy developments in Indonesia, Cambodia and Myanmar may well lead to boosts in real estate investment.

For foreign investors Cambodia represents particularly good value as there is virtually no legal distinction between foreign and local investors; in Myanmar, however, it’s mostly domestic investors that stand to benefit, due to legal prohibitions against foreign ownership of real estate.

In 2015 weakened national currencies and falling interest rates on loans in some countries made foreign investments attractive. In others stronger currencies are now helping domestic investors. While some forecasts are that these conditions will hold, growth in Asia will heavily depend on changes in global commodity prices and interest rates.

Since 2014 some countries have lowered interest rates and eased requirements on down payments in an attempt to stimulate domestic demand.

In February 2016 the People’s Bank of China announced it was reducing the down payment threshold for first-home purchases from 25 per cent to 20 per cent and from 40 per cent to 30 per cent for second properties. Interest rates have continued their descent and now sit at 4.35 per cent.

Easier lending terms aim to consolidate internal demand for property with the hope that market prices will grow over the longer term.

While currencies in Singapore, Taiwan, Korea, Myanmar and Indonesia have generally increased in value in the past year, those in Japan, Hong Kong, and the Philippines have been falling. The expectation therefore is that we can expect domestic investment to increase in the former set of countries and foreign investment to rise in the latter.

In Q1 2016 the Knight Frank Asia Pacific Prime Office Rental Index grew 1 per cent and the average vacancy rate rose by 0.2 per cent. However, certain markets are at different stages in the rental cycle: in Hong Kong and Mumbai rates are rising quickly; in the Phnom Penh and Taipei markets rents have essentially stabilized; in Shanghai, Kuala Lumpur, and Seoul rents have begun to drop; and in Jakarta and Singapore, the decline in rates has accelerated.

As a general rule markets with low office vacancy rates have low yields, as is evidenced in the table below. 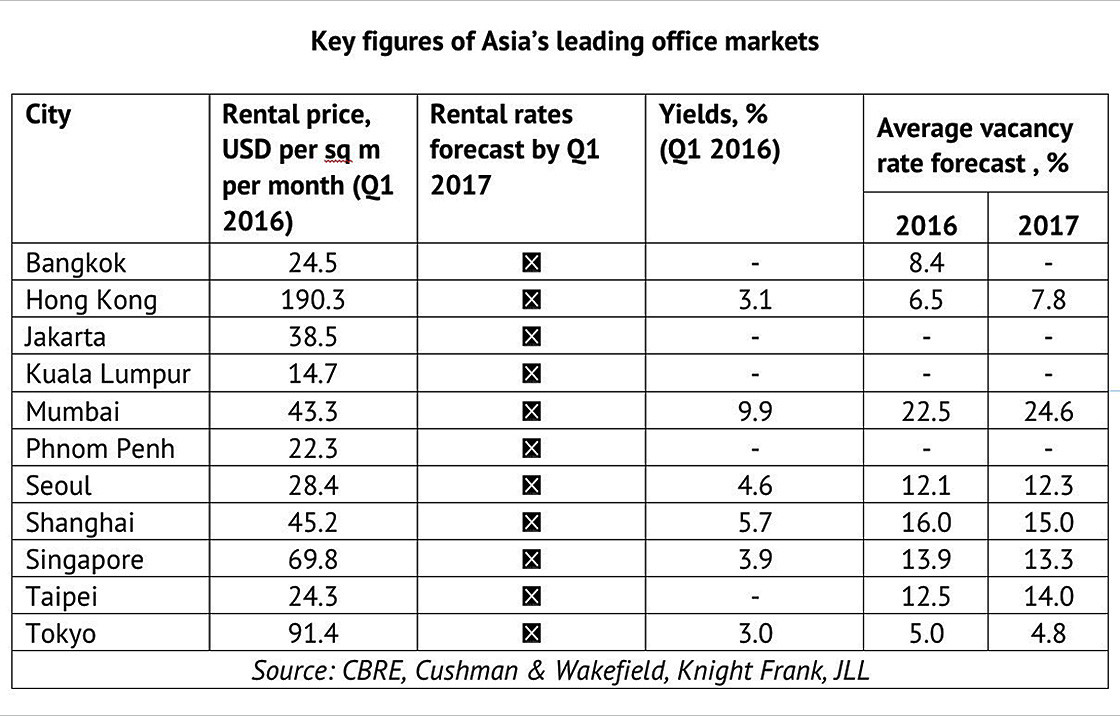 Looking to late 2016 and early 2017 global economic instability will likely force corporate tenants to plan their expenses more carefully and investors to choose the safest options. The strength of the euro and US dollar should attract foreign investors to Asian office markets in spite of the Chinese slowdown.

While Cambodia’s heavy dollarization means investors will have no exchange rate incentive to buy properties, long-term stability constitutes an attracting factor. Offshoring has been and will continue to be the mainstay of office and warehouse leasing activity in Manila and the Philippines.

In the wake of Myanmar’s recent boom, all rental rates in Yangon have shot up due to heightened demand from foreign firms and individuals, sluggish supply, legal barriers to foreign ownership and a paucity of other assets, stock exchange securities, etc., in which people can invest.

Retail property value growth in Asia is cooling down, according to CBRE, though experts from Colliers International are optimistic about this year’s prospects for retail in the region. While rates have decreased in Hong Kong, there has been sustained growth in property values in Shanghai and Singapore.

Other noteworthy exceptions to CBRE’s finding is Manila, where all real estate sectors are undergoing bullish growth and aggressive supply expansion, and Phnom Penh, where pro-business policies and projects have brought in many overseas investors and shopping mall tenants.

The opening of Phnom Penh’s Aeon Mall two years ago signaled a shift in retail investment, especially from formerly hesitant foreign investors. Aeon Mall No. 2 and Parkson Mall – more recent projects – should further this trend once they are completed. 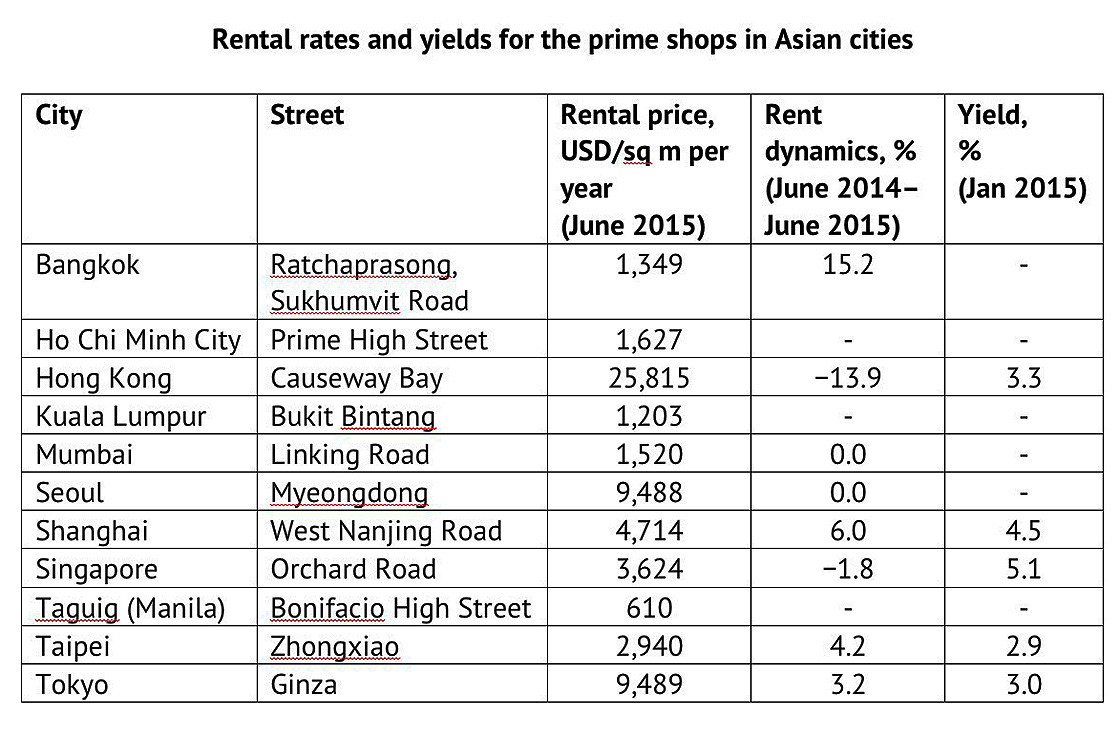 One of the key sales drivers in Asian metropolitan cities is the increasing number of tourists coming from mainland China. Consequently, if the Chinese economy continues to stumble, retailers in these locations will no doubt see volumes fall in turn.

China’s middle class and domestic consumption are growing regardless of the economic situation and lower export activity, which is a good sign for retail and hotel sectors in Singapore, Thailand, Malaysia, Hong Kong, Macau, South Korea, Taiwan and Japan, among others.

Demand for hotel accommodation in Asia over the past two years has been affected by terrorist attacks and weakening currencies in certain Asian and European markets.

While Northeast Asia still commands the largest share of international visitors, at 37 per cent Southeast Asia’s share is far from insignificant. Tourism in the Philippines and Cambodia has continued to grow steadily with each year (See: Cambodia Visitor Numbers up in First Six Months)

In terms of tourist volume per year China leads the region by a healthy margin, with Thailand, Hong Kong, Malaysia and Japan follow. Among the region’s poorest performers – in terms of traffic volume – are Vietnam, the Philippines, Cambodia and Myanmar. Hong Kong, Tokyo and Singapore lead the region in terms of hotel transaction volume. 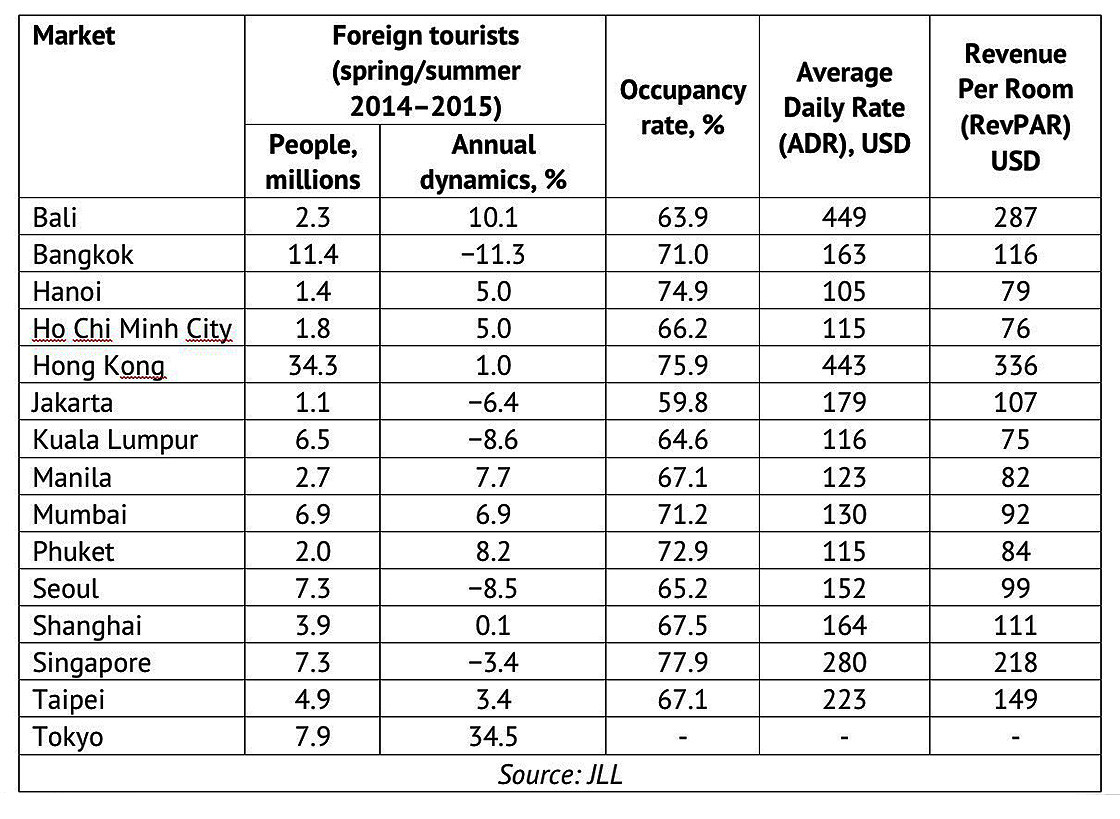 Despite the negative factors, JLL experts forecast positive growth for the region’s hotel property markets. Demand for rooms should grow due to various government initiatives. Shanghai will benefit from the June 2016 opening of the Shanghai Disney Resort theme park, and India’s new electronic visa system for 113 nationalities will stimulate inbound tourism.

Yangon is poised for further growth in the local tourism industry – which hosted 1.3 million visitors in 2014 – upon the completion of three major hotels: the Hilton Yangon, the Rose Garden Hotel, and the Melia Hotel Yangon. Jakarta is also expected to soon sign visa waiver agreements with more than 45 countries, which should usher a new wave of tourists.

In Singapore, the government has announced new policies aimed at stabilising residential prices. In Thailand supply outpaces demand, though residential developers continue to buy up prime parcels for high-end development.

In Hong Kong, there have been two recent developments: the sale of 2 Headland Road for $130 million to the family who owns Kingston Financial Group and the acquisition of 3 South Bay Close by National Electronics Holdings Ltd. for $86 million. These actions indicate interest in luxury residential properties as a method for storing value amid uncertainty. 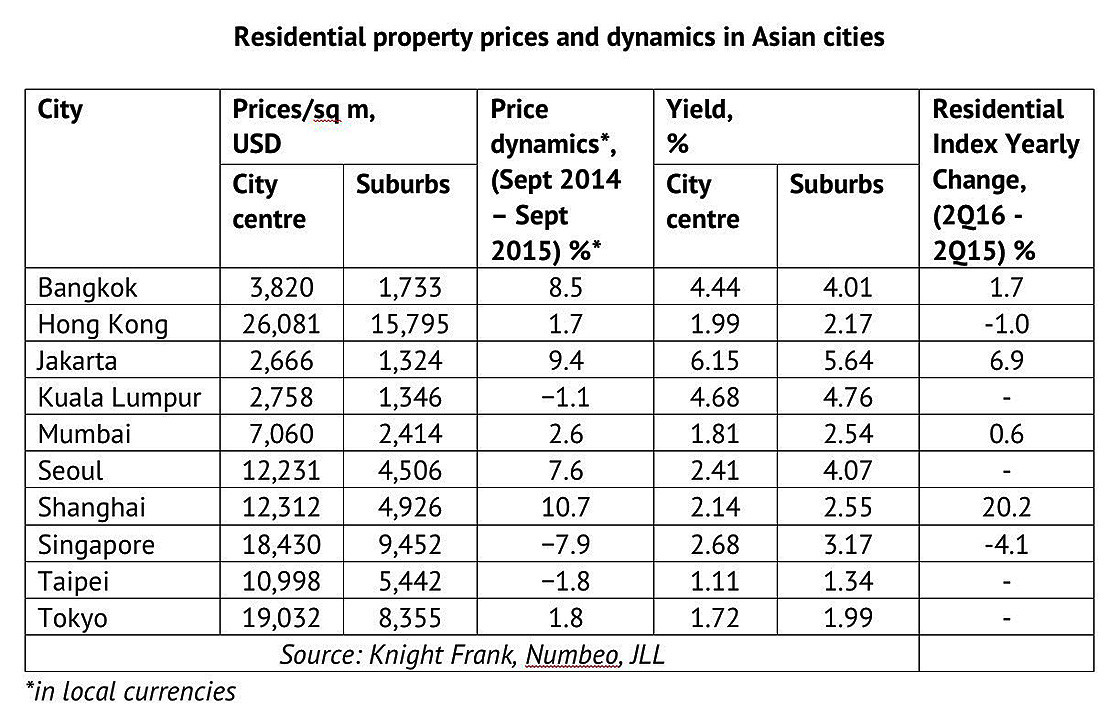 Trends on the online PropGoLuxury platform confirm this, recording a 45 per cent upsurge in requests for prime property in Kuala Lumpur, Malaysia following currency devaluation. Investors should be wary of any looming changes in the base rate by the US Federal Reserve, as well as any base rate changes by the Bank of England.

Where to invest in Asean 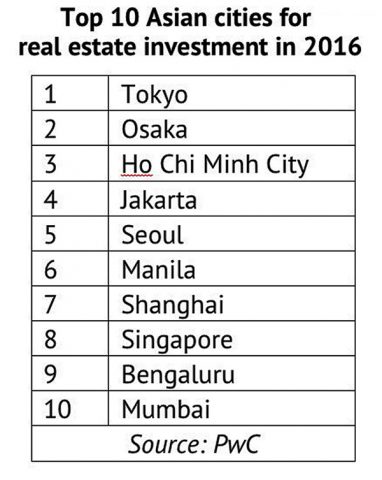 According to JLL, the most transparent and secure Asian markets are Hong Kong, Singapore, Malaysia and Japan. China, the Philippines, Indonesia, Thailand, South Korea and India are considered “semitransparent”. Among countries with low transparency, experts place emphasis on Vietnam and Myanmar.

The majority of investors surveyed by PwC named Jakarta, Tokyo and Ho Chi Minh City as suitable markets for property investments in 2016. Mainland China on the other hand, excluding Shanghai, is considered the best selling location.

Asian markets have a positive forecast for the rest of 2016, according to Cushman & Wakefield. Low inflation could mitigate the consequences of the Chinese slowdown, and legislative proposals may help revive economies in Japan and Southeast Asia. 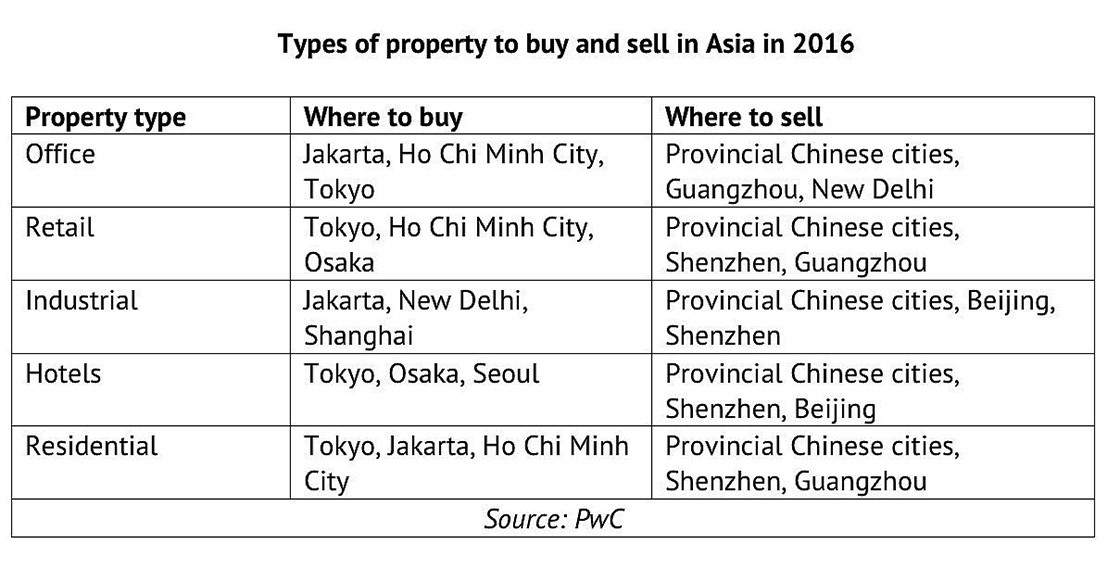 Considering the favourable economic forecast, Asian real estate market investments are expected to grow. Cushman & Wakefield estimates that capital investments will increase by up to 3 per cent on average, with major rises anticipated in China and Singapore.

According to PwC, over 80 per cent of their survey respondents believe that real estate businesses in Asia can increase their earnings in 2016 to “average” or “fair”, with 11 per cent of them expecting an exceptional year.

With a catalogue of more than 100,000 global listings from 55 countries, Tranio is a leading global real estate broker. Based in Moscow with offices in Spain and Germany, Tranio works In cooperation with leading private banks to assist real estate investors on acquisitions globally through a network of 500 partners.

In 2015 Tranio closed more than 450,000 international real estate deals. It publishes daily news and analysis on foreign realty, laws, and procedures related to the purchase or lease of properties globally

Latest posts by Tranio.com (see all)