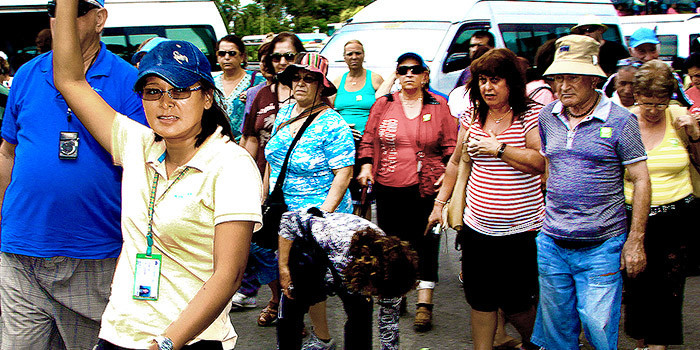 Inbound tourism to Asean is booming, or at least that’s what delegates to the 15th Thailand Travel Mart Plus Amazing Gateway to the Greater Mekong Sub-region (TTM+2016) conference and exhibition were told in Chiang Mai, Thailand recently.

According to preliminary figures from the Asean Secretariat some 98 million international travellers visited Asean member countries last year, an increase of more than 7 per cent on 2014. It added that in 2014 CLMVT members welcomed 44.42 million tourists, or about 42 per cent of the total visitors in Asean.

Experiencing the largest growth in inbound tourism numbers in 2015 was Myanmar which saw a 52 per cent year-on-year increase to 4.68 million, followed by Thailand with a 20 per cent rise to 29.8 million, Lao PDR with a 13 per cent increase to 4.7 million, followed by recently awarded ‘World’s Best Tourist Destination for 2016’ winner Cambodia, which saw a 6.1 per cent year-on-year (YoY) increase in foreign visitor arrivals to 4.78 million.

For regional tiger economy Vietnam tourism though proved to be a significant weak spot in the otherwise robust growth of the Vietnam economy, growing by just 0.9 per cent in 2015 to 7.9 million visitors.

Khin Than Win, deputy director general of Myanmar’s Ministry of Hotels and Tourism, attributed the staggering growth in inbound foreign tourists to Myanmar to seven airlines now flying into the country from Thailand and two from Vietnam, while noting that there are now also four international land checkpoints with Thailand and two with Lao PDR.

By 2020, he said, it was expected that foreign tourists to Cambodia will increase to between 7.5 and 8 million, creating more than one million direct jobs in the process.

With 4.7 million foreign visitors in 2015, a 13 per cent YoY increase on 2014, Manisakhone Thammavongxay, director of the Public Relations Division, Ministry of Information, Culture and Tourism, Lao PDR said the country was continuing to convert its land-locked status into a strategic advantage.

Ms Thammavongxay said there were now ten border checkpoints with Thailand, eight with Vietnam, and one each with Cambodia and Myanmar, with regular air services to Bangkok, Chiang Mai, Hanoi, Ho Chi Minh, Siem Reap and Phnom Penh.

While failing to explain why Vietnam’s tourism sector suffered the lowest year-on-year increase of the CLMVT, Vu Nam, deputy director general, Tourism Marketing Department, Vietnam National Administration of Tourism, said the sector now provided employment for more than 1.8 million people, compared to just 12,000 in 1990. Each year some 40,000 new workers are needed, he said.

Describing one recent initiative, Mr Nam said the island of Phu Quoc located just 15km off the coast of Cambodia, but owned by Vietnam, was designated a special tourism zone in 2014. Under the new classification visitors arriving by air or sea are provided with 30-day visa free access.

The first time the annual business-to-business (B2B) event has been held outside of Thailand, the TAT said TTM+2016 attracted 345 buyers from 56 countries, and 344 sellers.

As is often the case with events such as this TTM+ 2016 spawned yet another new CLMVT marketing theme. Termed ‘CLMVT Link: Prosper Together’, the initiative is designed to highlight the travel and tourism connectivity of the five CLMVT members, with each committing to promoting the others historical and natural sites.

Addressing the group’s first media conference Suthasak Supasorn, Governor of the Tourism Authority of Thailand (TAT), pointed to the emerging potential of the Asian Highway for boosting tourism for the CLMVT bloc, saying such infrastructure improvements would aid in joint marketing promotions such as motor caravans.

Once complete, he said, it will be possible to drive from Chiang Khong in Northern Thailand all the way through Lao PDR to Kunming in China, and from Mawlyamvine in Myanmar across Thailand to Da Nang in Vietnam. A separate route will also lead from Nakhon Phanom in Northeast Thailand through Lao PDR to the Vietnamese capital, Hanoi, he enthusiastically explained.

“Deeper integration of the Asean Economic Community will also promote Asean as a single tourist destination. It is not only for the benefit of any one country, but for the whole region. Enhanced transportation linkages between Cambodia, Lao PDR., Myanmar, Vietnam, and Thailand (CLMVT countries) will also strengthen the cause of the Asean integration.”

Sadly though the one thing that would truly strengthen Asean integration, or at least that of the five CLMVT countries seems as far away as when talks were first held on the topic in 2005; a Single CLMVT tourist visa.

That the Asean Community can go from a concept in 2007 to implementation at the beginning of this year yet details of a Single CLMVT tourist visa remain a figment of the imagination speaks volumes as to how integrated the Asean Community is… or isn’t.

Rather than attempting to make it easier for foreign tourists to visit all five CLMVT countries without depleting six or so passport pages and spending time and money having visas approved, the tourism chiefs instead focused on the rapidly improving road and air infrastructure throughout the CLMVT region.

The closest a Single CLMVT tourist came to being a reality was in July 2012 when Cambodia, Laos, Myanmar and Vietnam announced a Single CLMV tourist visa. Under the scheme a tourist would pay for a tourist visa at their point of arrival in the region and then be allowed entry in the other four countries.

At the time Thailand refused to join the agreement with then prime minister Yingluck Shinawatra dismissing the concept as unnecessary, noting that at the time Thailand provided visa exempt entry to visitors from 45 nations. Nothing has been heard of the Single CLMV tourist visa since.

Similarly, a Schengen-style visa for the ten members of the AC has never been seriously discussed since the Asean Community Blueprint was adopted in 2007.

Altough Thailand’s Minister for Tourism and Sports, Kobkarn Wattanavrangkul told The Nation that ‘Thailand is in talks with Cambodia, Laos, Myanmar and Vietnam over a single-visa entry, which is expected to help increase arrival numbers into the four CLMV counties to 25 million annually’, enquiries by AEC News Today to the TAT on what progress had been made on the topic were not responded to.

Mr Yuthasak is perfectly correct when commenting on 2015 regional arrival figures he said: “These statistics show the potential of the CLMVT market as well as its importance to the Asean Community. CLMVT countries might be a sub-grouping of Asean, but if they can strengthen their unity, it will ultimately benefit the Asean platform”.

The true test of these words and a significant step towards “unity” will be when the five CLMVT countries put aside their pettiness and stop squabbling over who gets what percentage of the tourist visa fee pie and focus on making their countries, and the region, more affordable to visit and with fewer bureaucratic obstacles.