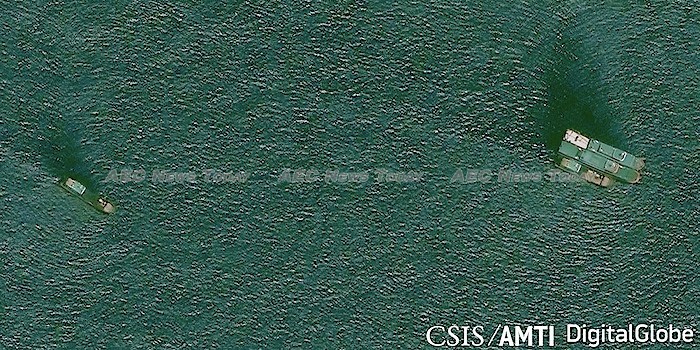 Filipinos finally heard last Sunday (April 14) what many have dreaded hearing for sometime. Scarborough Shoal has been lost to China.

The comments are the first yet by a senior Philippine government representative that the country no longer exerts control over Scarborough Shoal.

“What is currently notable is that Beijing is now clearly revisiting its excessive and unlawful claim in the South China Sea that has been ruled upon by the arbitral tribunal, which ruling is now an integral part of international law”, Mr del Rosario said in a statement

As foreign minister Mr del Rosario was responsible for the filing and representations before the International Court of Justice (ICJ) in The Hague against China’s claim to resources inside its so-called Nine-Dash Line, in particular Scarborough shoal.

Last month Mr del Rosario and former Ombudsman Conchita Carpio-Morales, filed a case against Chinese President Xi Jinping in the International Criminal Court (ICC) in The Hague. The complaint alledges crimes against humanity and “massive” environmental destruction by China in connection with its activities to gain control in the South China Sea.

The call on Saturday earned a withering response from Mr Panelo, who on Sunday said: “Mr del Rosario, being responsible for the loss of the country’s possession of the Scarborough Shoal during his stint as Foreign Affairs Secretary by naively causing the withdrawal of our armed ship in the area of conflict, certainly can not put forward his pretended patriotism and feigned righteousness as if he has not contributed vastly to the unwelcome situation we are presently in”.

On Wednesday the war of words continued, with Mr del Rosario describing Mr Panelo as “mindless”, adding that he “appears to be in surrender without lifting a finger to peacefully defend what is ours”.

Today Mr Panelo ramped up the attack on Mr del Rosario, repeating his claim from Sunday, adding Beijing has had “de facto control over the [Scarborough Shoal] shoal off Zambales province for seven years now”.

The Philippines lost Scarborough Shoal due to Mr del Rosario’s “horrendous mistake. We are now trying to fix his mess, and no amount of justification from him could justify his monumental blunder”, Mr Panelo said.

Insisting that there was no shelving of the arbitral ruling, Mr Panelo said President Duterte believes that the best way to resolve the maritime dispute is through “peaceful and diplomatic negotiations with China.  “Armed acts of enforcement” may result in a bloody war to the detriment of the Philippines, he said.

Two weeks ago Manila protested what it described as the presence of “hundreds of Chinese vessels swarming around Pag-asa Island”, part of the Spratly Islands, 480km (298 miles) west of the Philippines’ coastline dubbing it an “illegal invasion”.

Today, just days after US and Philippines military forces completed a military exercise in the South China Sea at Pag-asa (Thitu) Island, Chinese fishing vessels have been seen swarming into areas of the Spratly’s where they have not been seen before.

In a report accompanying satellite images released by US-based think tank the Asia Maritime Transparency Initiative-Center for Strategic and International Studies (Amti-CSIS), it said “In almost every instance, the vessels are riding at anchor, many in large clusters, and without fishing gear in the water”.

Some 23 Chinese fishing and marine vessels were seen as close as one kilometre off Kota Island (Loaita Island) Loaita Cay (Panata Island*), about 24 km south of Pag-asa (Thitu) Island, the report said.

While hardly a ‘swarm’, the report notes that the number of Chinese fishing and other vessels in the area had steadily increased from just one 50-meter Chinese fishing trawler near Kota on March 12.

According to Armed Forces of the Philippines (AFP) chief-of-staff General Benjamin Madrigal Jr, more than 200 Chinese vessels have been circling Pag-asa Island since January this year.

Up until this announcement on Saturday and Sunday the Philippines government has staunchly denied ceding any territory to China. Earlier this month President Duterte threatened to order Filipino soldiers “to prepare for a suicide mission” to defend Pag-asa Shoal.

*Panata has been erroneously called Lankiam Cay in Philippine maps