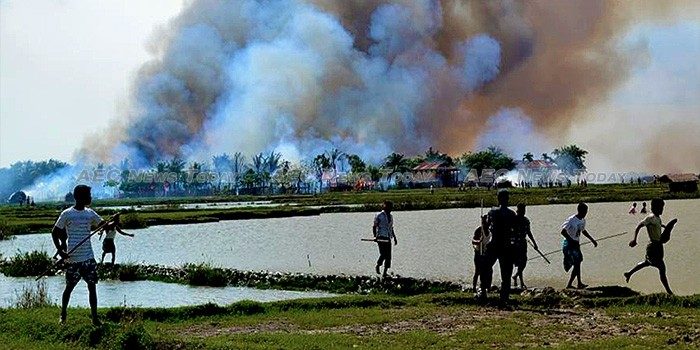 The severity of the reported violations, against a backdrop of severe and longstanding persecution, appears to me to amount to possible commission of crimes against humanity, which warrants the attention of the International Criminal Court (ICC).

This was the chilling indictment of Myanmar presented to the United Nations Human Rights Council in Geneva by UN High Commissioner for Human Rights (UNHCHR), Zeid Ra’ad al-Hussein while presenting his annual report yesterday, March 8, 2016.

Noting a standing request to open a Myanmar Office Of The High Commissioner For Human Rights (OHCHR), Mr al-Hussein contined with his damning appraisal urging “the [Human Rights] Council, at minimum, to establish a Commission of Inquiry into the violence against the Rohingya, particularly during security operations since 9 October 2016”.

Providing background, Mr al-Hussein said his office was forced to conduct its field study in neighbouring Bangladesh where some 73,000 Rohingya refugees have fled after the Myanmar government refused it permission to operate there.

“An Attempt At Expelling the Rohingya Population”

According to Mr al-Hussein his office “found material evidence and corroborated eyewitness accounts of mass killings, including babies, children and elderly people unable to flee, and the burning of entire villages; shooting; massive detention; systematic rape and sexual violence; and deliberate destruction of food and sources of food.

“It appears that what has been termed by the security forces a ‘counter-insurgency operation’ is in reality aimed at expelling the Rohingya population from Myanmar altogether, as the Special Rapporteur has said”.

The description is the closest one can get to genocide without using the ‘G’ word and comes less than one year after Nobel Laurette Aung San Suu Kyi’s National League for Democracy (NLD) party officially assumed office following the November 8, 2015 Myanmar general election.

Long regarded by the UN as the world’s most persecuted race of of people, the October 2015 military operation in Rakhine (Arakan) State is the latest against Myanmar’s estimated 1.3 million Rohingya population, which Myanmar refuses to acknowledge as either a race of people or citizens, despite generations of settlement.

Last November a high level delegation of foreign diplomats and UN representatives were allowed to visit the troubled region, but only after days of intense international lobbying; and only after State-run news agencies were sent to the region to ‘clarify’ the situation and ‘refute accusations on the alleged racial and religious persecution’  (See: Envoys Spend Second Day in Rakhine State as Aid Ban Lifted).

Despite the overwhelming flow of evidence of on-going atrocities Ms Suu Kyi has remained all but silent on the atrocities being committed against the Rohingya, earning her the wrath of those who previously considered her a champion of human rights.

No Rescinding of Nobel Prizes

An online petition with more than 200,000 signatures seeks to have the Nobel Prize committee strip her of her award. Their efforts are in vain.

Ms Suu Kyi is not the first Nobel Prize recipient to bring discredit to what was once one of the world’s most highly regarded awards. Previous recipients to have acted less than the pillars of society that the award once represented include former US secretary of state and national security advisor Henry Kissinger, former Israeli prime minister Shimon Peres, former Palestinian leader Yasser Arafat, and former US president’s Woodrow Wilson, and Barack Obama.

Those still alive shouldn’t fret though. Unlike awards with honour such as those for valour or service which can be rescinded, the former secretary of the Norwegian Nobel Committee, Geir Lundestad, said in a 2009 interview “we never denounce our laureate’s, we always stand by them”.

Myanmar was not the only Asean member nation to receive special mention by Mr al-Hussein.

Pointing to the Philippines where more than 7,000 people have been killed in the Duterte administration’s war on drugs and where President Duterte has made admissions that he personally engaged in killing suspected criminals while mayor of Davao, Mr al-Hussein called called for “a prompt, independent, and credible investigation into all killings”.

In Cambodia where the political space has undergone rapid decay in the last several weeks, Mr al-Hussein voiced concern over the lengthy pre-trial detention (remanded in custody) of human rights defenders from the Cambodia Human Rights and Development Association (Adhoc), in addition to those swept up in that country’s own war on drugs. “Thousands of people are now detained in inadequate conditions, many without benefit of due process”, he said.

In regards to recent threats against non-government organisations (NGOs), the media, and opposition politicians by the ruling Cambodian People’s Party (CPP) and Prime Minister Hun Sen, Mr al-Hussein cautioned that for Cambodia’s looming commune elections in June and next year’s national elections to have credibility they must occur against a backdrop of “guarantees that courts will be independent and impartial, and that the freedoms of expression, peaceful assembly and association will be protected”.

President’s Duterte and Hun shouldn’t feel too victimised for being singled out. Also coming in for specific criticism from Mr al-Hussein was the United States, the Russian Federation, the European Union (EU), and the Democratic People’s Republic of Korea (North Korea), as well as more than 40 other countries.

Despite the alarming overall context of his report, there was also some good news on the human rights front over the past year. According to Mr al-Hussein The Gambia, Uzbekistan, Tunisia, and Greece had all seen significant milestones achieved in human rights improvements over the past 12 months.

See here for the full version of Mr al-Hussein’s annual report and oral Update to the 34th session of the Human Rights Council.