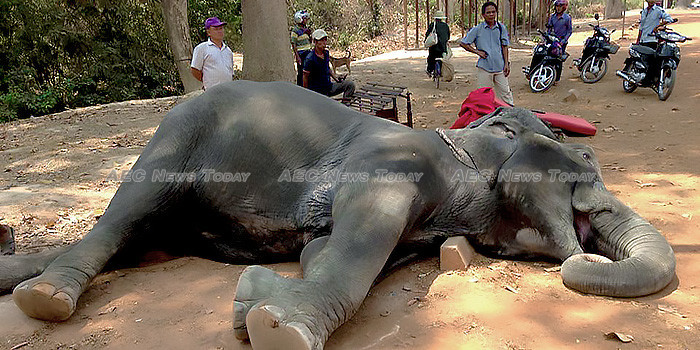 In a rare win for animals visitors to Cambodia’s iconic Angkor Wat temple will no longer be able to view the ruins from atop an elephant.

The decision to ban elephant rides at Angkor Wat came in the wake of a Change.org petition containing 185,474 signatures calling for an end to the the practice being sent to the Authority for the Protection and Management of Angkor and the Region of Siem Reap (APSARA).

In 2016 Sambo, one of 14 elephants used for carrying tourists around the Angkor Archaeological Park died after carrying tourists between two temples for 40 minutes. Estimated to have been around 40-45 years old, she had worked with Angkor Elephant Company (AEC) since 2001. Last year another elephant also reportedly died of exhaustion, spurning animal lovers to take to change.org.

Mr Oan said his group had found a location with plenty of natural forests and a stream in Sotr Nikum district, south of Kulen Mountain. “We want the elephants to live in as natural a manner as possible”, he said.

Describing the end of elephant rides at Angkor Wat as “a watershed moment that shows the tide is turning against cruel wildlife tourism”, a spokesperson for environmental awareness group Moving Animals said the decision was “a great relief”.

Listed as the the top most cruel holiday activity by World Animal Protection (WAP), prior to the death of Sambo elephants at Angkor Wat worked two shifts a day — 7:30am-10:20am and 3:30pm-6pm — seven days a week. After her death the morning shift was cut by 30- and the afternoon shift by 20-minutes.

In response to a global campaign against elephant rides by WAP 114 global travel tour operators have pledged to stop offering elephant rides.

There are believed to 70 domesticated elephants in Cambodia, with some 500 thought to live in the wild, including some 110 living in the Keo Seima Wildlife Sanctuary and nearly 200 in the Cardamom Mountains.