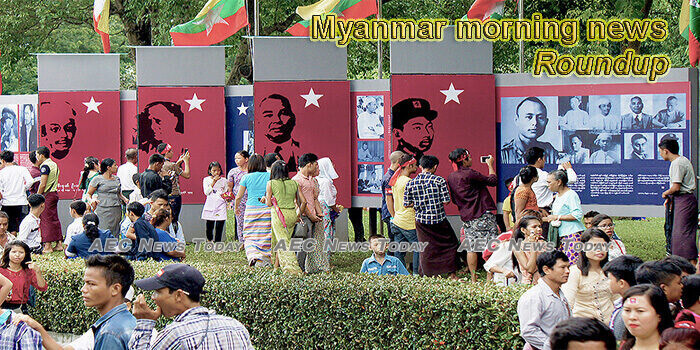 Myanmar Urged to Work With UN Rights Process Rather Than Resist Scrutiny
Rights groups are urging Myanmar to work with international bodies to address allegations of rights abuse and failures to reform rather than rebut the accusations at the U.N. Human Rights Council in the run-up to the Southeast Asian country’s next Universal Periodic Review in January 2021.
— Radio Free Asia

Myanmar is an emerging market for the IT industry, says Huawei
Despite only beginning to embrace digitalization around five years ago, Myanmar has been rapidly expanding its digital ambitions as a nation: smartphone prevalence is picking up among the populace, even outside the urban centers, and 3G-enabled internet access is cheaply available and widespread.
— Tech Wire Asia

Myanmar: Northern Alliance Trio Keen To Join Union Peace Conference
Three members of the Northern Alliance have issued a statement signalling their openness to joining the Union Peace Conference under the right circumstances, including COVID-19 mitigation efforts and “under the leadership of the FPNCC [Federal Political Negotiation and Consultative Committee], its guidance, and security guarantee.”
— Eurasia Review

Myanmar includes 343 more infections of coronavirus
A statement issued Wednesday by Myanmar’s Ministry of Health and Sports, the overall figure of patients who have been diagnosed with the novel coronavirus across the country has amounted to 343, as two more cases were confirmed over the past 24 hours.
— Menafn

Stockpiling and loans: Myanmar’s rice sector resilient to COVID-19
COVID-19 does not appear to have had a significant impact on monsoon planting for paddy despite some farmers facing financial difficulties, and the agriculture sector is expected to keep growing amid a slump in other parts of the economy.
— Frontier Myanmar

Rights Group Wants Japan to Drop Plan to Give Funds to Myanmar’s Police Force
Human Rights Watch on Thursday urged the Japanese government to drop a plan to donate 100 million yen (U.S. $934,300) to buy vehicles and communications equipment for the Myanmar Police Force to use to protect dignitaries, arguing that the police are partners with the army in widespread abuses.
— Radio Free Asia

Myanmar pro-democracy forces form new parties as elections loom
Some lawmakers who have grown disgruntled with Aung San Suu Kyi’s National League for Democracy are adding to Myanmar’s political landscape in a way that could give the dominant party something to think about ahead of elections scheduled to take place on Nov. 8.
— Nikkei Asian Review (paywall)

Complaint mechanism to be set up for crimes against minors in conflict
With scores of children killed and maimed each year in Myanmar’s long-running ethnic wars, and hundreds conscripted as laborers, the government is setting up a national complaint mechanism for reporting violence and sexual crimes against minors in regions under conflict, RFA reported quoting officials.
— Mizzima

Telenor Myanmar donates K70 mln for measures against COVID-19
Telenor Myanmar handed over a total of K70 million to the National-Level Central Committee for Prevention, Control and Treatment of COVID-19 to use for the on-going combatting measures.
— The Global New Light of Myanmar

Ayeyawady embankment collapse leaves over 14,400 flood victims
Even though the floods caused by the broken embankment on the bank of Ayeyawady River near Shwege Sewage Pumping Station in Amarapura Township, Mandalay Region, is now under control, there are now over 14,400 flood victims, says Director Aung Thiha, from Bridge Construction Group-2 under the Ministry of Construction.
— Eleven Myanmar

COVID-19 Impact: Myanmar to Reboot Export Promotion Strategies
The recent world banks’ economic monitor (June 2020) points out the importance of exports as a pillar for the country’s economic recovery. Rebound in growth would be anchoring on exports in the medium term.
— Mizzima

Stimulant powder worth over 2.3 mln USD seized in Myanmar state
Myanmar authorities have seized 327 kg of stimulant powder in eastern Shan state, according to a statement from the Central Committee for Drug Abuse Control (CCDAC) on Thursday.
— China.org

MNHRC inspects prison, court, custodies in Thayet Township
An inspection team of Myanmar National Human Rights Commission (MNHRC) led by its member U Kyaw Soe visited the Thayet Prison yesterday to ensure that there was no violation of human rights.
— The Global New Light of Myanmar

Myanmar-India border closure affects weaving businesses in Chin state
With a long-time closure of Myanmar-India border including Tamu-Moreh border and Reekhorda-Zokhawthar border caused by spreading of the coronavirus across the country, the weaving businesses were suspended for lack of raw materials in the India imported market, according to the weaving entrepreneurs from Kalay Township.
— The Global New Light of Myanmar

Myanmar Military to Investigate Soldiers for Rape of Rakhine Woman
The Myanmar military says it will investigate allegations that three soldiers raped a woman in Rathedaung, Rakhine State in late June.
— Irrawaddy

Politicians in Myanmar’s Rakhine Must Stop Fighting Each Other: Independent Candidate
A female Rakhine lawmaker stuck between rivals in the Arakan National Party has been forced to run without any party’s backing.
— Irrawaddy

Karen Protestors Say Myanmar Military Must Leave After Killing Local Woman
Over 1,500 protestors in Papun, Karen State called for the Myanmar military to leave the area after soldiers robbed and killed a local woman.
— Irrawaddy