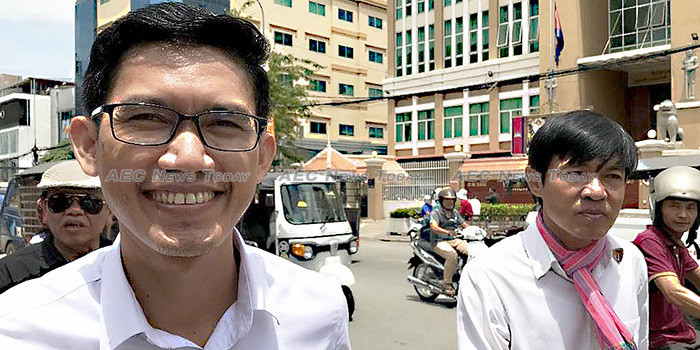 Yeang Sothearin and Uon Chhin were arrested on November 14, 2017 and four days later provisionally charged with ‘supplying a foreign state with information prejudicial to national defence’ under Article 445 of the Cambodia Criminal Code.

In March last year they were charged with production of pornography under Article 39 of the Law on the Suppression of Human Trafficking and Sexual Exploitation. If convicted of both offences they could each be jailed for up to 16 years.

Yesterday’s hearing was expected to see the case end. Trial Judge Im Vannak had previously said that a verdict would be delivered on August 30, with this subsequently being changed to yesterday.

However, in an announcement that surprised all he said that he could not rule on the journalists guilt or innocence without more evidence and returned the file to the Investigating Judge, ordering him to reinterview Mr Yeang, Mr Uon, and any other people involved.

Describing their disappointment outside the court yesterday, Mr Yeang told media that neither of the two had done anything that could harm the country. “But the court has ruined my life and my family for two years because we are still charged and some of our activities are restricted.

“I am so hurt when the case has not yet ended and the re-investigation has to start all over again like this”, he added.

In todays statement the 37 civil society organisations said that they ‘strongly condemn the decision by the Municipal Court judge to continue the investigation into unsubstantiated espionage charges against Yeang Sothearin and Uon Chhin.

‘Yesterday’s hearing showed that there is a complete lack of evidence in support of these baseless charges exposing fair trial rights violations and highlighting the trial as a blatant affront to freedom of expression and media freedom in Cambodia.

‘We urge the authorities to immediately drop all charges against the pair’, the statement said.

The protest by Cambodian civil society organisations follows an opinion issued by the United Nations Working Group on Arbitrary Detention in May. It concluded that the pre-trial detention of the journalists resulted from their peaceful exercise of the right to freedom of association and the freedom of expression.

Since 2017 the Cambodian government has been on a compliance drive, implementing sometimes harsh penalties against businesses that fail to comply with statutory requirements. Cambodia’s taxation office has been at the forefront of the compliance push, its success reflected in ever increasing tax revenue. Media organisations critical of the government have been subject to particular scrutiny.

Some 32 radio stations relaying RFA, Voice of America (VOA), and Voice of Democracy (VOD) material were closed, closed in 2017. RFA closed its Cambodia bureau in September of the same year, blaming it on a crackdown by the government on independent media ahead of last year’s general election. However, all had fallen foul of the finance ministry for failing to pay taxes, and for not being licensed news organisations, or registered identities.

Similarly falling foul of the compliance push was the print edition of the 24-year-old English-language newspaper The Cambodia Daily, which was shuttered in 2017 after being served with a reported $6.3 million back tax bill.

In May last year  The Phnom Penh Post was sold after receiving a $3.9 million tax penalty. Dismissing claims that the tax penalty was anymore than regulatory enforcement, a media conference to introduce the new owners was told that the deal was being negotiated for one year prior to the sale.

The decision by the court to send the two-year-old case back to its beginnings comes as a European Union (EU) delegation is penning its recommendation on whether Cambodia should be stripped of lucrative tariff exemptions under the so-called Everything But Arms (EBA) trade scheme due to concerns over shrinking democratic space, human rights abuses, and attacks on media freedom.

The European Parliament will announce its decision next February, with a six month moratorium before the decision comes into effect.

If the exemptions are removed it will see duties and taxes applied to Cambodian imports to the EU. In 2018 about 34 per cent of Cambodia’s total exports worth some $4.2 billion went to the EU. It has been forecast that the removal of EBA privileges could cut 13.33 per cent off last year’s GDP growth of 7.5 per cent.

Meanwhile, in Thailand yesterday Phnom Penh-based Belgium journalist, Kris Janssens, was reportedly removed from his hotel room in Bangkok and taken by five Thai immigration police to the Immigration Bureau in Suan Plu.

Mr Janssens was allegedly advised that he should not pursue his plan to interview activist Anurak ‘Ford’ Jeamtawanich about a physical assault he suffered in May.

Mr Jeamtawanich might induce him to commit an illegal act, he was told, and he should leave Thailand immediately.

Further discussions saw the ‘leave now’ order eased, with Mr Janssens permitted to remain in Thailand until October 12, but told he would be in trouble if he met with Mr Jeamtawanich.

It is not known if Mr Janssens entered Thailand on a media visa, or how the Thai immigration department knew that he planned to interview Mr Jeamtawanich. Attempts to contact Mr Janssens prior to publications were unsuccessful.

The professional members of Foreign Correspondents’ Club of Thailand (FCCT) have protested the actions of Thailand’s immigration department and called on the Thailand government to ‘continue to allow foreign journalists to report on political issues here without facing threats of unspecified legal action’.