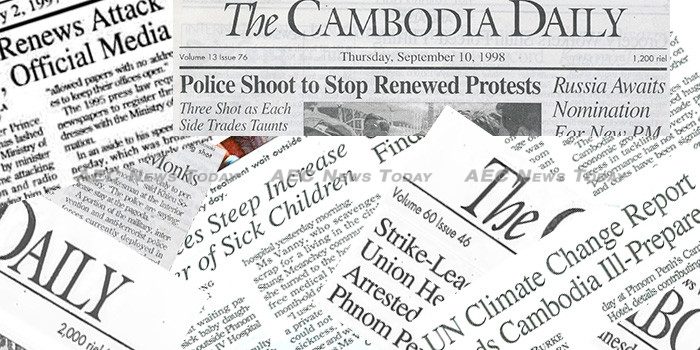 Unless a (unlikely) miracle occurs, when tomorrow’s edition of The Cambodia Daily rolls off the printing press it will be the end of a tradition. Presented with a $6.3 million tax bill at the beginning of last month, the 24-year-old publication will close; and with it a big chunk of modern-day Cambodia journalism history.

Since news of the the tax bill first leaked into the public arena the paper’s management and staff have attempted to deflect the tax issue by labelling it as an ‘attack on press freedom’. With fellow Cambodia English-language daily, The Phnom Penh Post, joining the ‘press freedom’ chorus, the media has been full of ‘he said, they said’ reports on an almost daily basis.

In an interview with the BBC, Deborah Krisher-Steele, The Cambodia Daily’s owner and deputy publisher, said that the government’s actions are intended to “intimidate and harass The Cambodia Daily… and others who speak the truth.” It is a theme that Phnom Penh, and other journalists, along with some rights groups, have promoted since.

Tax bill not based on audit

At the same time, Ms Krisher-Steele has claimed that Cambodia’s General Department of Taxation (CGDT) had arbitrarily compiled the tax bill – comprising $2.4 million in unpaid taxes, almost $1 million in ‘additional tax’, and another $3 million in interest – without having conducted an audit as is required by the Cambodia Tax Law.

Similarly, in an interview published by CNN on August 31, Jodie DeJonge, editor of The Cambodia Daily, is reported to have said that ‘the bill was calculated by the tax department without any audit of the paper’s books. The tax office has offered no opportunity to appeal or negotiate.

Not so. In various stories published over the past several weeks it has been clear that the publication has made several representations to the tax department since early August, all of which have been rejected.

The founder of The Cambodia Daily, former Newsweek correspondent Bernard Krisher, also bought into the fracas, claiming that his “estimated $39 million in charitable contributions” to Cambodia over the past 24 years should be taken into consideration.

When questioned by the The Phnom Penh Post, CGDT spokesperson Ream Ratha is reported as saying that the tax bill was ‘“based on documents”, though declined to elaborate’.

In the pro-government news-site Fresh News, CGDT director Kong Vibol was reported having said in early August that “The Cambodia Daily has 30 days to respond by submitting a complaint letter. If the newspaper does not submit a complaint letter it means they accept the re-audit to pay tax.”

Denying that any political motivation was behind the tax bill, Mr Kong is reported as saying that the increased enforcement is in line with the CGDTs goals of increasing tax revenues.

Ms Krisher-Steele not being aware of the looming tax debt when she bought The Cambodia Daily from her father in April for $1,000 was irrelevant, Mr Kong said, while the claimed tens of millions of dollars in charitable donations by the paper’s founder had never been reported.

While remaining defiant and maintaining the ‘press freedom attack claim publicly for the last several weeks, Ms DeJonge was considerably more open at a ‘town hall’ meeting of the Overseas Press Club of Cambodia (OPCC) on Saturday, September 2.

“The Cambodia Daily does have a tax problem; largely due to the previous owner who was tax defiant”, she said. Adding that “The Cambodia Daily hasn’t made any money since 2008” an emotional Ms DeJonge revealed to those who had gathered to discuss how the foreign media should respond to the ‘assault on press freedom’, that the paper had been operating unlawfully since August 12 when its publishing licence had expired.

One problem that The Cambodia Daily and journalists faced was that the looming shutdown was being reported in the Khmer media as a “just a tax dispute’. The ‘attack on press freedom’ angle was getting almost no traction, the group heard.

That The Cambodia Daily should be ‘targeted’ when “very few Cambodian companies and businesses pay tax” was also offered as further proof that its tax bill was unjust and an ‘attack on press freedom’.

That throughout its 24 year history The Cambodia Daily’s dogged holding of the Cambodia government to account by reporting on issues such as deforestation, illegal logging and sand dredging, land disputes, and human rights abuses made it a tall poppy that Cambodia Prime Minister Hun Sen would prefer wasn’t nipping at his heels heading into an election is unquestionable.

That a publication which almost daily challenged the government over its governance and compliance record did not practice the same standards that it held the government too is equally unquestionable.

Long perceived as an NGO, it wasn’t until August 8 that the ‘myth’ was destroyed when Ms Krisher-Steele described The Cambodia Daily as having been established as a “non-profit project” to build capacity by training Khmer journalists in writing news in English, but this did not mean it was an NGO.

Whether this altruism was achieved by putting the work produced by those being trained behind a paywall, while failing to meet its tax obligations when its competitors were complying with the law is questionable. Ironically, it will also soon prevent its own stories on its demise be accessed by anyone without a subscription.

Registering for tax has been obligatory for not-for-profits and organisations for at least the last decade. The government has increasingly shown its frustration at NGOs and not-for profit’s in complying with registration and operational requirements.

Just days after news first broke of The Cambodia Daily’s tax woes, Interior Ministry spokesperson Khieu Sopheak revealed that only 200 of some 5,000 domestic NGOs had complied with requirements to register their banking details with the ministry

Increasing the Cambodia tax base

Last year Cambodia switched to a new formal tax regime as part of moves to increase the size of the country’s tax base.

A three month amnesty was granted for companies and organisations to voluntarily declare previous under-reporting for their last three tax return periods and file amended documents and pay the under-reported amount without penalties or interest being applied.

This year as part of the CGDTs goal of expanding the Cambodia tax base and boosting revenue, small and medium size enterprises (SMEs) are being encouraged to register for tax.

In exchange for doing so they will be eligible to claim a two year exemption from Tax on Profit (Top) commencing from the year in which they first generated revenue, or from the year of tax registration. Additionally they will be exempted from the annual 1 per cent Minimum Tax and its associated monthly pre-payments during the same period that the TOP exemption operates.

How successful this new push will be in bringing small enterprises such as mom and pop grocery stores, restaurants, bars, or motorcycle repair shops inside the new Cambodia tax regime is yet to be seen. Especially with the CGDT insisting on registering any business that complies with the Cambodia Ministry of Commerce (MoC) requirement to register even small businesses or sole proprietorships with it as a medium-sized enterprise for tax purposes – subjecting them to complicated record keeping and monthly filings requiring the services (expense) of a knowledgeable bookkeeper or accountant in order to comply. Cambodia is not ranked 131 out of 190 countries for ease of doing business without reason.

With the CGDT vigorously attempting to expand Cambodia’s tax base, the shuttering of a high-profile organisation such as The Cambodia Daily, which also happens to be a thorn in the side of the government as it heads into an election, sends a very clear message to others doing business in the Kingdom and not meeting their tax obligations… comply, or die.

While The Cambodia Daily might consider “the power to tax is the power to destroy“, for the CGDT there is much more at stake.

If The Cambodia Daily is given a reprieve and allowed to continue operating after the September 4 deadline without having paid its tax bill – especially after the very public airing the matter has had – the CGDTs efforts to increase the country’s tax base will suffer an enormous blow. At the same time, any last minute reprieve would have the management and staff of The Cambodia Daily beholding to the same government it has been snipping at for many years.

For those two reasons alone The Cambodia Daily will very likely print its last edition tomorrow. While you can put lipstick on a pig, at the end of the day its still a pig. And to paint this as primarily an ‘attack on press freedom’ overlooks the very large hurdle of noncompliance that has to be gotten over first.

On its part the CGDT needs to ensure that tax assessments it hands down are based on factual data, lest its attempts to increase compliance are seen as just a continuation of the less than transparent practices of the recent past.

It is not only Ms Krisher-Steele who is having difficulty understanding how a non-profit organisation that “hasn’t made any money since 2008” can amass a telephone number long bill for unpaid taxes given salaries and rents in Cambodia over the past decade. In this battle neither side can claim the moral high ground, while the risk is equally great for the CGDT as it is for The Cambodia Daily.

However, if one lives in a forest, hunts wolves, and leaves their back door open, one shouldn’t be surprised if one day a wolf walks in and eats them.

The Cambodia Daily is set to meet its demise not as a result of the journalists and staff there not having done their job in accordance with their professions, but because of poor internal governance, and a history of noncompliance. The message to potential foreign investors and other business owners, foreign or Khmer, currently operating under the CGDTs radar is very clear. There is a big bad wold in town and he is very hungry.