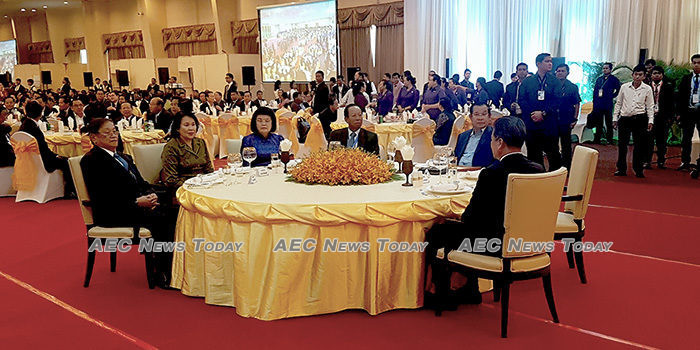 Cambodia Prime Minister Hun Sen has dismissed rumours and speculation that he is planning to have his eldest son succeed him as prime minister, saying such a thing isn’t possible, while urging journalists to improve their professional standards and government spokespeople to be more responsive to media requirements.

In a speech touching on a wide range of topics to mark his 35th anniversary as prime minister, Mr Hun, told a  gathering of some 5,000 journalists, media sector employees, tour guides, government spokespeople, and guests in the capital, Phnom Penh, yesterday (Jan 14) that power can only be obtained through the electoral process in Cambodia.

Dismissing any notion that he is contemplating giving up the nation’s top job any time soon, Prime Minister Hun said his son, General Hun Manet, deputy commander-in-chief of the Royal Cambodian Armed Forces (RCAF) and Commander of the Royal Cambodian Army (RCA), will have to “wait until 2028 or after 2029 or until 2030 to be involved with the prime minister position”.

To broad applause, the world’s longest serving prime minister said that he needs 10 more years to finish the “things that need to be done”.

Urging the media to play a more active and effective role in contributing to national development, Mr Hun said the media sector could be more destructive than bombs or projectiles if the news it published or broadcast is fake.

“A bomb or a projectile can damage or destroy a village or a house, but misleading information can destroy a nation, and economically affect the macro economy due to psychological warfare, he said, adding “journalists must participate in fighting against fake news through releasing true information”.

Urging the journalists present to use their profession to fight against inequality, corruption, and social injustice, Mr Hun said “we need a clean and transparent society”.

Journalists should “dare to report on all unjust activities in society”, Mr Hun said, claiming “honest journalism is necessary because not all government projects worked as they are supposed to. Journalists should “work hand-in-hand with the government to fight injustice for a better society”.

Addressing the government spokespeople in the room the Prime Minister said national and sub-national institutions must have a clear information mechanism such as a spokesperson’s unit, a website, and a Facebook page. Ministers as well as municipal/provincial governors must be highly responsible of information release”, he said.

Ordering all ministers and governors to cooperate with journalists, the Prime Minister said: “Do not treat journalists as enemies. Treat them as an indispensable partner in development.”

While Mr Hun might wish this to be the case, and while plenty of people were nodding their head in agreement, the facts on the ground are vastly different to the utopian free-flow of information environment he might wish for.

The words “spokesman xxxxx” /”the minister for xxxx” did not respond/ could not be reached for comment are a regular addition to English-and Khmer-language news publications.

In the four years that AEC News Today has been established in Phnom Penh we are able to count on one hand the number of times questions fielded to Cambodian ministries including, but not limited to, the Ministry of Information (MoI), Ministry of Interior, Ministry of Commerce (MoC), Ministry of Labour and Vocational Training (MoLVT), Ministry of Health (MoH), Ministry of Mines and Energy Cambodia (MMEC), and General Department of Customs and Excise of Cambodia (GDCEC), have been responded to.

This is not the first time that Prime Minister Hun has instructed his ministers and government communications people to actually do their job and answer inquiries from the media and to proactively promote the work of the government.

Following his instructions last year the Council of Ministers commenced a weekly media briefing featuring spokespeople drawn from key government ministries. However, with few invited guests bothering to carry name cards to the briefings and some heading for the door as soon as they have delivered their speech, the ability for journalists to build relationships, follow-up details, check facts, or even spell names correctly is extremely retarded.

Last August Keo Rottanak, Electricite Du Cambodge’s (EdCs) director-general and the delegate minister attached to the Prime Minister, point blank refused to provide journalists at one such briefing with his telephone number for fact checking purposes when asked, claiming it would be “inappropriate”. He also said he doesn’t read emails (See: Cambodia electricity to stay higher than neighbours as EBA jitters emerge).

Last week attempts by AEC News Today to find out details of the Phnom Penh Airport emergency safety drill by the State Secretariat of Civil Aviation (SSCA) saw our staff member yelled at for contacting the SSCA spokesperson by telephone, after the published email boxes on its website returned a full response.

Calling on journalists to improve their capacity to strengthen their ability to oversee government performance and policy, Mr Hun said that he was concerned by the professional skill levels of Cambodian journalists, saying they need to enhance their knowledge and professional ethics through workshops and trainings.

In a country where both English-language daily newspapers — the Khmer Times and The Phnom Penh Post — have shown little aversion to editing the online version of published stories without notification, or even deleting totally incorrect ones, the calls for improved professional standards and capacity building should not be limited to individual journalist’s alone. AEC News Today remains the only English-language news source in Cambodia that offers a journalism cadetship and paid journalism internships.

Saying he was concerned that “there are some journalists who are not trained and do not work for media companies” and use bad words to criticise individuals on Facebook, the Prime Minister on three occasions singled out the owner/commentator of one Facebook-based video “news” channel for broadcasting while allegedly heavily intoxicated last year.

Perhaps recognising that not all government officials throughout the Kingdom might be as supportive of his desire for increased journalism scrutiny and reporting on government policy and performance, the Prime Minister also announced that he will provide his personal volunteer lawyers to defend legal cases brought against journalists in the course of their employment.

Nominating Ky Tech, head of the Cambodian Government Lawyers Council, Mr Hun said the offer of legal assistance for journalists had come at the suggestion of Cambodia Minister of Information (MoI), Khieu Kanharith. Mr Khieu is a veteran former journalist and past editor-in-chief of Kampuchea, the first Cambodian newspaper after the Pol Pot period.

Awarded a rank equivalent to that of a minister in March 2018, Mr Ky led the legal team that saw the dissolution of the Cambodia National Rescue Party (CNRP) in 2017. Last February he was tasked by Mr Hun to assemble a team of lawyers to provide free legal aid to “unfortunate women in Cambodia”.

Stressing that the legal representation would only be available for journalists who “practice professionalism” and “report facts and dispel fake news”, Mr Hun said the volunteer lawyers will be able to deny the requests from unprofessional journalists who publish distorted news and spread misinformation.

While much of what Mr Hun said during his almost three-hour long speech is encouraging for journalists and increased transparency and accountability if implemented, past experience has shown that the stated policies of the Prime Minister are not necessarily carried out as stated, becoming less identifiable with the original intention the further away from Phnom Penh one travels, or in areas where uniforms are more abundant.

Having designated January 14 as the occasion each year when he will meet journalists en masse, it will be interesting to see if next year the Prime Minister heralds a year of improved collaboration, cooperation, transparency, and accountability, or whether he is regalling the gathering with tales of how busy his volunteer lawyers have been over the previous 12 months. The jury is still out on whether anyone was actually listening to the Prime Minister, or merely hearing and along for the free food and photo ops.

According to Cambodia’s MoI and reported by AKP, Cambodia currently has some 310 print media organisations, some 400 websites and online TV channels, 200 TV stations, 221 radio stations, 42 journalist associations, and 22 representative offices of foreign media agencies, including the newly registered office of the Voice of America (VOA).

Note: AEC News Today apologises for the quality of the photos, but our camera was refused entry by MoI officials who deemed it “a security risk”.

Raksmey Khoem in Phnom Penh contributed to this story.