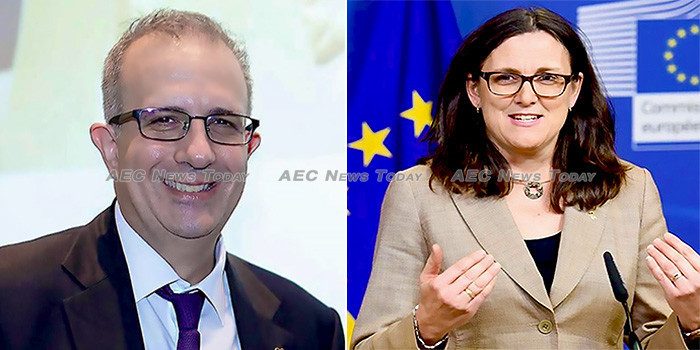 The European Chamber of Commerce in Cambodia (EuroCham) has again called on the European Commission to immediately “state its objectives” after the group threatened to strip Cambodia’s access to the Everything But Arms (EBA) trade pact.

EuroCham’s request, made in a news release late Thursday, renewed its call for the European Commission to identify “the measures that it would like to see implemented” to keep Cambodia from losing its crucial tariff-free access to the EU single market. A move that could cost the country hundreds of millions of dollars each year and jeopardise hundreds of thousands of jobs in the country’s vital garment sector alone.

The move comes after EuroCham on Monday issued a letter to the European Commissioner for Trade, Cecilia Malmstrom, to “express serious concern” over Ms Malmstrom’s warning on October 5 that EBA trade preferences would be withdrawn unless the Cambodian government made “clear and demonstrable improvements” to what the EU considers to be a deterioration of human rights and democracy.

“We are of the view that initiating a suspension of EBA or short-term unilateral sanctions may have long-term negative impacts, said EuroCham in its Monday letter.

It also requested that the European Commission “clearly state, as soon as possible, its objectives as well as the credible and satisfactory measures that the Commission wants to see implemented in Cambodia, as we feel that there is now much uncertainty and confusion” over the threat to suspend EBA benefits.

The letter continued, “We note that no decision to suspend or withdraw the EBA status has been made yet in Cambodia and hope that a dialogue can be implemented in order to identify better ways to address the concerns of the European Commission”.

Should the EU follow through on its threat, Cambodia would be only the fourth nation to be punished over human rights issues, following Myanmar, Sri Lanka and Belarus.

According to EBA regulations, ‘the status can be removed in some exceptional cases, particularly in case of serious and systematic violation of principles laid down in fundamental human rights and labour rights conventions’.

If EU tariffs are reimposed, the move would affect an estimated 40 per cent of Cambodia’s exports and generate an annual loss of $676 million. As reported in Politico, “Cambodia’s main fear is that the EU crackdown could deliver a devastating blow to the all-important textile and rice industries”.

Top Cambodia officials have denounced the EU’s warning, saying the group has based its assessment on faulty international news reports.

“They do not reflect the reality in Cambodia”, Phay Siphan, a government spokesman, told The Phnom Penh Post, adding, “it’s the Cambodian people who will be affected”.

EuroCham and others in Cambodia have also been quick in stridently rejecting any “perceptions of linkage” between the situation in Cambodia and the current crisis in Myanmar.

“The violent situation in Myanmar poses a very different set of challenges and conditions for the European Union to evaluate”, its letter to Ms Malmstrom said.

While the dispute with Cambodia continues, the EU on Wednesday signed a vital free-trade agreement with Vietnam.

Ms Malmstrom called the deal, worth an estimated $54 billion each year, the “most ambitious agreement we have ever made with a developing country.”

The EU-Vietnam FTA went forward despite condemnation from rights groups. “Vietnam is clearly among the most rights abusing governments in Asean”, Phil Robertson of Human Rights Watch told The Phnom Penh Post on Thursday.

Cambodia Prime Minister Hun Sen, meanwhile, is in Brussels for the 12th Asia-Europe Meeting where he is set to meet with Premier Li Keqiang of China and Russian Prime Minister Dmitry Medvedev, among others.

Some analysts have speculated that Cambodia may be able to withstand an EBA suspension by striking deals with Beijing and other powers.

On Wednesday the Ministry of Foreign Affairs and International Cooperation (MFAIC) issued a media announcement stating that the kingdom plans to triple bilateral trade with Turkey to more than $500 million per year by 2020. The announcement comes ahead of an official visit to Turkey by the Cambodia Prime Minister commencing tomorrow, October 20.