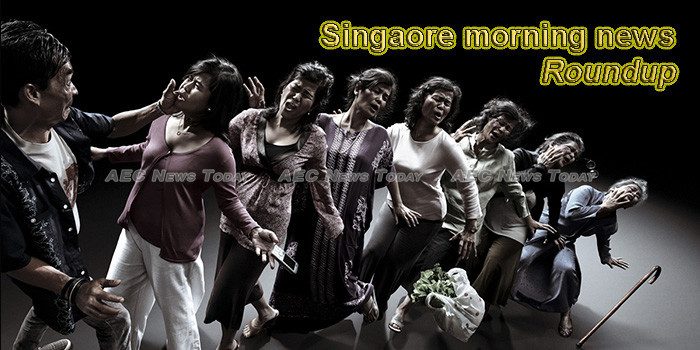 Singapore-based website The Online Citizen goes on ‘hiatus’ after government raid
The Online Citizen which claims to be Singapore’s “longest-running independent online media platform” has found itself in the thick of an investigation around defamation.
— Mumbrella Asia

Singapore’s first bitcoin trial begins, with dispute on trades allegedly reversed wrongfully
The trial for Singapore’s first legal dispute involving the cryptocurrency bitcoin started on Wednesday (Nov 21), with a court expected to decide whether a number of trades done in April last year had been wrongfully reversed – leading to proceeds deducted allegedly without authorisation.
— The Star Online

Singapore, India stress on freedom of navigation
India and Singapore on Tuesday reiterated the need for all countries to maintain freedom of navigation and overflight consistent with international law, including the United Nations Convention on the Law of the Sea, in the backdrop of China’s aggressive behaviour in the South China Sea.
— The Times Of India

Singapore lawmaker blasts FB over refusal to take down ‘false’ post on 1MDB
A Singapore lawmaker hit out at Facebook yesterday, saying it had reneged on a promise to help rein in fake news and calling for tougher regulations, which the social media firm has cautioned against.
— FMT News

Noble’s restructuring hangs in the balance amid investigations
ONE day after Singapore regulators launched an unprecedented tripartite probe into troubled Noble Group for suspected breaches of securities laws and accounting practices, there appears no clarity on whether the commodity group will be able to forge ahead with its hard-fought debt rescue plan or it risks being upended.
— The Business Times

Making Asean the next global power-house
ALL eyes are on Asean as the region of 650 million sets its sights on becoming the world’s fourth-largest economy by 2050. As economic and digital integration accelerate, it becomes increasingly apparent that power will be the underlying force that will hypercharge the region’s growth.
— The Business Times

Singapore: Government must end harassment of online news platform targeted over critical article
A news editor facing a criminal investigation over an article that criticized the Singapore government is the latest victim of an escalating crackdown on freedom of expression in the country, Amnesty International said today.
— Amnesty International

Singapore, Netherlands to share know-how on environment, water
Amsterdam has been battling floods since it was founded in the 13th century, and the Netherlands has become a leader in waste management and resource recovery.
— Straits Times

Singapore is the 7th best city globally to find a job
Singapore has emerged seventh among 100 countries in a study of the best cities to find a job released by German relocation company Movinga, scoring 6.741 out of 10.
— Human Resources Online

NTUC Foodfare to take legal action against The Independent Singapore website over ‘false’ reports on hawkers
This is after the socio-political website refused to comply with a letter of demand from the cooperative’s lawyers asking for an apology and the retraction of two published articles that are allegedly defamatory.
— Today Singapore

AVA advises S’poreans to avoid buying U.S.-imported romaine lettuce & to discard it if in doubt
Singapore’s Agri-food and Veterinary Authority (AVA) has warned Singaporeans to be cautious about eating romaine lettuce, especially any that has been imported from the U.S.
— Mothership

Singapore listed companies among world’s least exposed to cyber threats, finds study
Despite its reputation as one of the most connected countries globally, Singapore’s listed companies are among the least exposed to cyber threats, according to findings from Cyber Intelligence House’s latest Cyber Exposure Index (CEI).
— The Edge

Singapore strengthens security ties with Canada through new MoU
The island nation of Singapore has bolstered its operational cybersecurity capabilities following the signing of a Memorandum of Understanding (MoU) with Canada.
— The Daily Swig

India, Singapore renew army training pact
Singapore and India have renewed a bilateral agreement that will see the Singapore Army continue to train and conduct exercises in India.
— The Straits Times

Singapore and the Netherlands share long friendship, common values: President Halimah
Singapore and the Netherlands have a longstanding friendship that goes back to Singapore’s early independence, and they continue to share strong economic ties and a similar outlook on the world, said President Halimah Yacob on Wednesday (Nov 21).
— The Straits Times

PAP likely to announce line-up of top 4G leaders on Friday
Singaporeans will get a good indication of who is most likely to succeed Prime Minister Lee Hsien Loong as People’s Action Party (PAP) leader and the country’s fourth prime minister tomorrow.
— The Straits Times

Food deliveryman arrested in Yishun, e-scooter seized by LTA for exceeding weight limit
Irresponsible e-scooter riders have hogged headlines lately, which probably explains why it has become significant enough to be raised as a topic in Parliament.
— Mothership

Bank of China launches innovation lab in Singapore
The Bank of China Innovation Lab (Singapore) will spearhead and manage regional and global R&D activities. It will establish a training structure to build a pipeline of talents and foster financial innovation and research collaborations with partners such as fintech firms, institutes of higherlearning and the government.
— The Edge

MOH told public hospitals to stop paying agents to bring in foreign patients
Upon the orders of the Ministry of Health (MOH), public health institutions (PHI) have ceased contracts with agents for foreign patient referrals.
— Mothership

Public service officers urged to engage Singaporeans to ‘co-create’ solutions
A former top civil servant, National Development Minister Lawrence Wong has this advice for today’s up-and-coming public officers: Don’t just do paperwork behind the desk, but go out and engage stakeholders and Singaporeans.
— The Straits Times

Guidelines become ‘common language’ of search and rescue teams in a disaster
Imagine a scenario where search and rescue personnel from China, Saudi Arabia and Brunei are brought together to carry out relief work.
— The Straits Times

How Beyond Social Services scheme gets rental block residents to help one another
When residents of a rental block in Ang Mo Kio grew worried about a neighbour who was often heard crying, they instantly alerted “Mummy Jan”.
— The Straits Times

Daily Briefing: 1 in 5 full-time Singapore workers could lose their jobs to technology; China still a travel-favorite for Singaporeans
Singapore is expected to be hit the most by the technological disruption in Southeast Asia as 21% of the city-state’s full time jobs is expected to be displaced within the next 10 years, according to estimates from the World Economic Forum.
— Singapore Business Review

China developer CFLD cuts staff in Singapore office
BARELY two years after setting up its headquarters here in June 2016 and going on a hiring spree earlier this year, the international arm of Chinese developer China Fortune Land Development (CFLD) has retrenched a number of employees in its Singapore office.
— The Business Times (paywall)

Harry Potter casts a spell on Singapore Airport
You wouldn’t think that an airport regularly named as the world’s best would need any extra magic to help attract air passengers, but Singapore Changi is turning to young wizard Harry Potter for help.
— CNN Travel

MMA: Singapore’s Amir Khan predicts ‘historic win’ for upcoming ONE Championship lightweight title bout
Mixed martial arts (MMA) exponent Amir Khan is a huge fan of boxing legend Muhammad Ali. And like his idol, Khan has a habit of predicting how many rounds it would take to beat his opponent.
— Channel News Asia