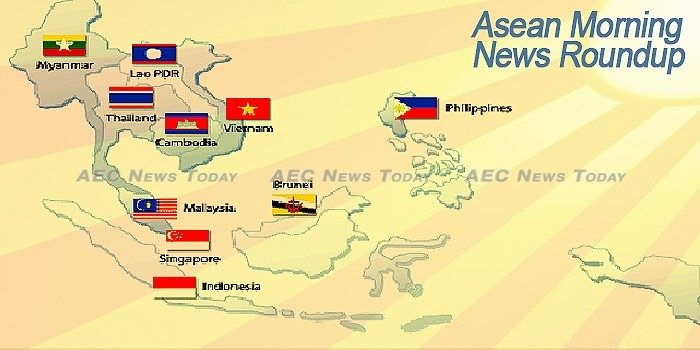 Minister Calls for Chainsaw Import Ban to Tackle Logging
Environment Minister Say Sam Al on Monday said he would seek approval for a ban on the import of chainsaws in a bid to tackle the country’s persistent illegal logging trade.
– The Cambodia Daily (paywall)

Railway links construction date set
TThe government has set March next year as the date for the ground-breaking ceremony for the building of the rail link to Phnom Penh International Airport and Phnom Penh Special Economic Zone (PPSEZ).
– Khmer Times

RI fails to expand growth
Indonesia, the largest economy in Southeast Asia, is struggling to find extra fuel to boost its economic growth this year after the latest data revealed results that did not meet expectations.
– The Jakarta Post

Pakistan boosts orange exports to Indonesia
Indonesian fresh fruit importers say Pakistan will face tough rivalry from China. Pakistan hopes to see an increase in exports of its famous Kinnow oranges to Indonesia, as it has started to infiltrate the market through giant retailers.
– The Jakarta Post

Shift of global economic power to emerging economies set to continue in long run, with India, Indonesia and Vietnam among star performers
The long-term global economic power shift away from the established advanced economies is set to continue over the period to 2050, as emerging market countries continue to boost their share of world GDP in the long run despite recent mixed performance in some of these economies.
– Sat PR News

Many firms yet to tap into Asean ICT market
According to a study commissioned by the Malaysia Digital Economy Corporation (MDEC) and conducted by the International Data Corp (IDC), the Asean ICT Market is estimated to be worth US$48bil (about RM198.7bil) by 2019.
– The Star

Malaysia’s Dec exports seen rising again, import growth likely dipped
Malaysia’s exports likely expanded in December for a second month, and at a faster annual pace, a Reuters poll showed. Exports declined in September and October from a year earlier, before increasing 7.8% in November on solid shipments of manufactured and agricultural goods.
– The Edge Market

Taking education to the next level
For 10 years, Wawasan Open University has provided over 19,000 people the chance to study through its Open Distance Learning (ODL) programme.
– The Sun Daily

Myanmar officials ‘in denial’ over U.N. report on crimes against Rohingya
Myanmar’s government remains “in denial” about alleged atrocities by its military against minority Rohingya Muslims, officials present at a meeting in Bangladesh said, despite leader Aung San Suu Kyi’s pledge to investigate the findings of a devastating U.N. report.
– Reuters

Central Bank turns the spotlight on loan favouritism
The Central Bank of Myanmar has accused private banks of granting loans to individuals connected with bank directors. But some businessmen disagree with CB that the banks are self-serving.
– Myanmar Times

Myanmar, Thailand push ‘one destination’ Bangkok Post
Thailand and Myanmar have vowed to stimulate tourism and raise the number of visitors between the neighbouring nations to 1.5 million by 2020 as part of the “two countries, one destination” cooperative scheme.
– Bangkok Post

Furniture design competition to bolster innovation
The Association of Myanmar Interior Designers AMID will hold the first locally sourced design competition next month, according to AMID secretary, U Thant Soe Oo.
– Myanmar Times

Memorial in Philippines for South Korean whose murder stunted drugs war
The Philippines held a memorial on Monday for a South Korean businessman whose kidnapping and murder by rogue anti-narcotics police prompted a shock suspension of police from President Rodrigo Duterte’s war on drugs.
– Reuters

Duterte threatens to kill tax cheats
President Duterte on Monday sent a chilling message to companies and individuals who had not been paying correct taxes to the government: “You son of bitches, pay up. If not, I will kill you.”
– Philippine Daily Inquirer

BDO readies contingency measures in Cebu
BDO Unibank Inc., the countryís largest lender controlled by tycoon Henry Sy, said its whole operations will not be affected by the possible closure of 26 branches by the Cebu City government over business permit issue.
– Manila Standard

Singapore seizes jet of Malaysian tycoon in center of 1MDB scandal
A private jet belonging to Malaysian tycoon Low Taek Jho ó who is under investigation for his involvement in the scandal-hit Malaysian sovereign wealth fund 1Malaysia Development Berhad (1MDB) ñ has been seized by Singapore authorities, media in both Singapore and Malaysia reported.
– CNBC

Nearly 5 in 10 job vacancies in 2016 for PMETs: MOM report
Nearly half, or 48 per cent, of job vacancies in Singapore as at Sep 30, 2016, were for professionals, managers, executives and technicians (PMETs), the Manpower Ministry said on Tuesday (Feb 7).
– Channel News Asia

Singapore mulls slew of sops to lure Aramco IPO
Singapore is considering a range of measures to lure a listing from energy giant Saudi Arabian Oil Co., according to people familiar with the matter, as global exchanges compete for a slice of what could be the worldís largest-ever initial public offering.
– Bloomberg

The National Anti-Corruption Commission (NACC) says certain people identified by the auditor-general as being involved in the alleged Rolls-Royce bribery are believed to be the same as those the agency suspected of having a hand in the scandal.
– Bangkok Post

Airport staff end strike, go back to work
Luggage X-ray unit workers at Suvarnabhumi airport have returned to their regular duties after about 300 workers went on strike on Sunday, the business operator said.
– Bangkok Post

Charter draft set for royal endorsement as amendments completed
A special panel has finished amending the charter draft in line with His Majesty the King’s observations. National Legislative Assembly president Pornpetch Wichitcholchai said yesterday that the Secretariat of the Cabinet would now submit the draft to the King for royal endorsement by February 18.
– The Nation

TDRI urges government to tackle graft
The government should show the world it is committed to wiping out corruption swiftly as it could improve the country’s ranking in the Corruption Perceptions Index (CPI), according to Somkiat Tangkitvanich, president of the Thailand Development Research Institute (TDRI).
– Bangkok Post

AIS signs deal to exclusively air HBO
AIS YESTERDAY announced its partnership with HBO, with the American premium cable and satellite television network offering entertainment content to AIS via both mobile and fixed broadband.
– The Nation

The rise of unregulated livestock production prompts health concerns in regions
THE UN’S FOOD and Agriculture Organization (FAO) is warning that increasing demand for, and consumption of, meat and other products of animal origin in East and Southeast Asia are threatening the health of millions of people and livestock as unregulated producers race to meet the demand, often ignoring the possibility of disease and contamination.
– The Nation

Incentives mulled to tone down drinks
The Finance Ministry is considering offering incentives for drink makers to lower the sugar content of their products as part of government efforts to improve public health.
– Bangkok Post

Consumer prices surge in Jan
The consumer price index (CPI) in January picked up 0.46% against the previous month as nine of 11 groups of items in the basket of commodities used for CPI calculation have marked up, the General Statistics Office (GSO) said.
– My Hanoi Info

HCMC airport capacity to rise to 45m passengers
Authorities have proposed an expansion plan for HCM City’s Tân Sơn Nhất Airport that will enable it to handle 45 million passengers a year. It has a designed capacity of 25 million passengers but handled 32 million last year.
– Viet Nam News

National retail trade sales see increase in January
The total revenue from retail trade and services saw a year-on-year rise of 10 per cent, to US$15 billion in January, according to the General Statistics Office (GSO).
– Viet Nam News

Vietnam Policy Changes Boost Foreign Investments
Vietnam is on the rise as increasing levels of foreign direct investment support strong economic growth and help to drive development across the country. Its big cities, Ho Chi Minh City and Hanoi, are at the forefront of the transformation as more people flock to its urban centers and new high rise buildings change its skylines.
– Financial Tribune

Ex-leaders of Vinalines get death in mln corruption case
After 4 days of hearing, the Hanoi People’s Court this afternoon sentenced Duong Chi Dung, the former chairman of Vinalines, and Mai Van Phuc, the ex-CEO of the State-owned Corporation, to death for their offenses in a serious corruption case in 2008.
– Vietmaz