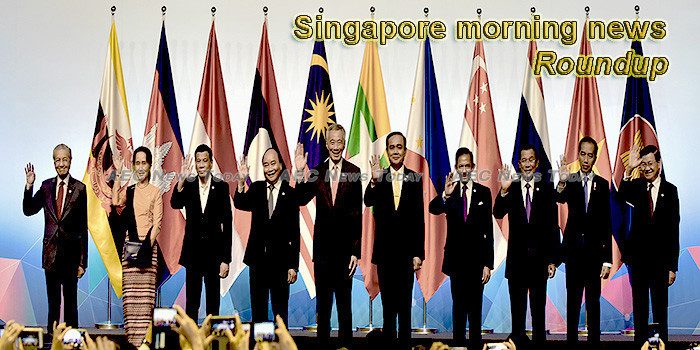 Singapore high commission says news reports in Malaysia on Johor’s port limits are inaccurate
Singapore’s High Commission said on Thursday (Dec 20) that the Republic’s security agencies have been “exercising restraint” in enforcing its territorial waters, in response to a MalayMail.com report claiming that Singapore Navy vessels were spotted within the new Johor Baru Port limits.
— The Straits Times

Singapore F-15 base scrapped for Ohakea
The (NZ) Government has scrapped plans to create a base for a squadron of Singaporean fighter jets, citing the excessive costs involved.
— Newsroom

Forty years of reform: China vs Singapore
This week marks the 40th anniversary of the official beginning of China’s reform and opening-up, when the Third Plenary Session of the 11th Central Committee of the Communist Party of China was held from December 18-22, 1978.
— Asia Times

All applications for passport, NRIC to go online from 2020
From 2020, all passport and NRIC applications will have to be done online, as the Immigration and Checkpoints Authority (ICA) will progressively stop using paper forms for 15 services.
— Straits Times

Singtel launches EZ-link SIM card for tourists visiting Singapore
The hi!Tourist EZ-Link SIM Card, priced at $18, comes with 100GB of 4G data, up to 1GB per day access to Facebook, LINE, WeChat, and WhatsApp as well as 1GB roaming data for selected countries in the region.
— Yahoo News

Singapore had 5th highest tourist expenditure in the world for shopping last year: Mastercard
Ever wondered what tourists visiting Singapore enjoy doing in the Lion City? It turns out eating and shopping are among the top activities – at least according to how much money they’ve spent doing these things.
— Business Insider

Noble Group sets aside US$800m in trade and hedging facilities for New Noble as restructuring takes effect
Noble Group said, as its restructuring took effect on Thursday (Dec 20), that a total US$800 million (S$1.1 billion) in new money debt has been made available to New Noble – the restructured entity whose planned listing on the Singapore bourse was derailed by an ongoing probe into improper accounting.
— Straits Times

Next year’s G-20 summit will ‘look into challenges facing world economy’
Singapore has been invited by Japan to next year’s Group of 20 (G-20) meetings and summit in Osaka.
— Straits Times

Clear skies for Singapore office sector – but beware potential headwinds
Singapore prime CBD Grade A office rentals are heading into their third year of increases on the back of steady demand amid tightening completion of new office space.
— The Business Times

Singapore IPO funds raised in 2018 falls to second lowest since financial crisis
Funds raised through initial public offerings (IPOs) in Singapore have fallen to the second-lowest level in a decade since the global financial crisis in 2008, according to a report by PwC.
— The Edge

AI leads list of tech trends to watch in 2019: FleishmanHillard
Brands that use artificial intelligence (AI) to engage in detailed and explanatory conversations – seeking to place AI in real-life contexts – will be next year’s big winners, according to FleishmanHillard’s Tech Trends 2019:
— The Edge

Stall at Chinatown bazaar goes for $13,899, highest in six years
This is highest in 6 years; stallholders believe the stall is ‘lucky’ as it is a hotspot for visitors at the Chinatown market.
— The New Paper

Business opportunities in a world of trade disruption
The US-China trade war has been a topic of widespread discussion and concern. A poll at the recent EY Asia-Pacific Tax Symposium found that over half of the respondents from Singapore-based businesses felt moderate to significant impact from recent US trade actions, and believed that these trade actions will likely continue for the next six months to two years.
— The Business Times

Singapore Public Sector Outcomes Review finds productivity up with more successful jobseekers
Productivity is up, more jobseekers are landing jobs, and businesses now enjoy more convenience, said the Ministry of Finance in the latest Singapore Public Sector Outcomes Review on Thursday. The stock-take of the public sector’s work, released every two years, rounded up figures in areas such as the economy and welfare spending.
— The Business Times

COE premiums up in 3 categories
Certificate of entitlement (COE) premiums rose in three out of five categories in the latest round of bidding which ended yesterday.
— Straits Times

The Top 3 Best Performers of 2018
A look at some of 2018’s best performers and the lessons we can draw from them.
— Motley Fool sg