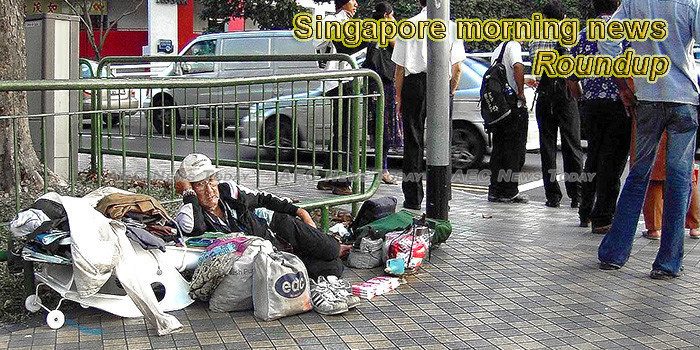 Singapore ranked 9th globally in wealth per adult: Credit Suisse
IN TERMS of wealth per adult, Singapore is ranked ninth among the world’s major economies, with the figure having risen 5.3 per cent to more than US$283,000 between mid-2017 and mid-2018.
— Business Times

183,737 millionaires in Singapore, up 11%
The ranks of the rich here grew significantly last year, on the back of soaring asset markets, a new report said yesterday.
— Straits Times

Singapore’s GIC set to acquire premium Perth tower for $228m: Report
Singapore’s sovereign wealth fund GIC is believed to be the winning bidder in the race to acquire a premium-grade tower in Perth, paying more than A$320 million ($228 million) for the property, according to a report by The West Australian.
— Deal Street Asia

Warmer weather, intense thunderstorms in Singapore by end of the month
These conditions are characteristics of the inter-monsoon period, which will last through November, said the Meteorological Service Singapore (MSS) in a weather advisory on Tuesday.
— Malay Mail

Go big or go home, S’pore needs wow factor to grow tourism: Experts
To woo and wow visitors, Singapore needs to go bigger and be more creative in order to grow its tourism sector and make it stand out from the competition, said tourism experts who weighed in on the Government’s plans to reshape and rejuvenate two of its key tourism attractions: Sentosa and Orchard Road.
— TodayOnline

NETS mobile payment mulls entry into China
People residing in Singapore who use the payments service NETS — which is practically everybody — could shortly be able to take the system abroad and use it for mobile payments in China, according to the South China Morning Post.
— Singapore Business Review

UOB sets up Southeast Asia’s first Engagement Lab to meet the banking needs of the region’s booming digital generation
United Overseas Bank (UOB) today announced the launch of its pan-regional Engagement Lab (eLab), which will enable the Bank to personalise the way in which it converses and serves its Digital Bank customers.
— AEC News Today/PR Newswire (media release)

Online food delivery and grocery goes physical: is it worth it?
All of Singapore’s major food delivery platforms now have a physical extension of their services, reflecting a growing trend amongst retailers around the world.
— Singapore Business Review

Singaporean fined S$7,600 for illegal import and possession of reptiles
In a statement yesterday, the Immigration and Checkpoints Authority of Singapore (ICA) and the Agri-Food and Veterinary Authority of Singapore (AVA) said that Joey Law Swee Siang, 28, was fined S$4,000 for the illegal import of the tortoise, S$3,000 for possessing an African spurred tortoise, and S$600 for keeping a razor-back musk turtle.
— Malay Mail

SINGAPORE: OUR APPROACH TO DIGITALIZATION
According to the Asian Development Bank, Asia’s e-commerce transactions account for 25 percent of the world’s business-to-consumer (B2C) market.
— Bloomberg

Oxfam chides The World Bank for downplaying the severity of inequality in its 2019 World Development Report
Based on their analysis, Singapore was ranked among the bottom 10 countries alongside Bangladesh and Nigeria while Denmark, Germany and Finland make up the top three.
— TOC

Thales appoints new talents to drive growth in South East Asia
South East Asia is a region that is ripe for development. The region’s combined GDP per capita increased multifold from $122 in 1976 to $4,021 in 2017. With the amount of natural and human capital that South East Asia possesses, expectations for further growth is high.
— AEC News Today/PR Newswire (media release)

URA’s revised guidelines a cooling measure not by design?
IS the Urban Redevelopment Authority’s Wednesday announcement to raise the minimum average unit size for non-landed housing developments Outside the Central Area (OCA) – the second part to the July 6 property cooling measures?
— Business Times

The business case for getting Asia-Pacific’s rail network on track
HYPERLOOP, autonomous vehicles and ultra long-haul flights are heralded as the future of travel, but rail is quietly undergoing something of a renaissance in Asia-Pacific too.
— Business Times

Franchises urged to leverage new tech to stay ahead
Convenience store franchise 7-Eleven has rolled out a loyalty app that allows regular customers to redeem free gifts or buy products at a discount. The franchise has also installed unified payment terminals, accepting a wide range of cashless options, across more than 380 stores islandwide.
— Straits Times

Waiver for TCM practitioners offering massage services
Registered traditional Chinese medicine (TCM) physicians will no longer have to get a CaseTrust mark in order to run a massage establishment from Jan 1 next year, which can help them save at least $2,400 every two years.
— Straits Times

No mountain high enough
The Singapore Youth Award (SYA) is Singapore’s highest accolade for youth, conferred on inspirational individuals who have displayed courage, resilience, leadership and a spirit of service, making a positive difference in the community around them. This five-part retrospective revisits previous recipients of the Award, and how they continue to change lives and touch hearts.
— Straits Times

Video interview claims Singaporean man yet to receive approval for housing assistance permit, lives in dumpster
A Singaporean man in Bukit Timah-Holland Group Representative Constituency (GRC) was discovered to have been living in a rubbish disposal centre for nearly two years after receiving no response regarding his application for a rental flat from the Housing and Development Board (HDB).
— TOC

Man and son get upclose look at wild boar that’s ‘half the size of a car’ in Punggol
Stomper Daryl was on the way home from picking his son up from tuition at the recreational centre last Saturday (Oct 13) at 4pm and came across the wild boar opposite SAFRA Punggol.
— Stomp (StraitsTimes)

Indian national molests woman asleep next to him on SIA flight, pleads for leniency as it’s his first time flying
The man promised not to touch any woman again.
On Thursday, Oct. 18, the 23-year-old man named Ravichandran Vignesh pleaded guilty to one count of molest and was sentenced to jail for six months in Singapore.
— Mothership