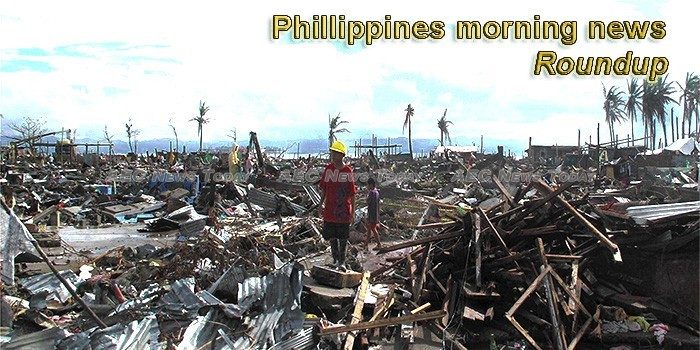 Typhoon Ompong threatens to deepen Philippine rice crisis
As Super Typhoon Mangkhut (known in the Philippines as Typhoon Ompong) continues its path of destruction the damaged fields and paddocks of Luzon, among others, doesn’t auger well for a country already in the grips of a food crisis, with the departing storm threatening to multiply possible malfeasance by the country’s National Food Authority (NFA) and its chief administrator.
— AEC News Today

Typhoon Mangkhut: More Than 40 Bodies Found in Philippines Landslide
Emergency workers in the Philippines recovered more than 40 bodies from the muddied wreckage of a gold miners’ bunkhouse after Typhoon Mangkhut set off a landslide, burying the remote northern town of Itogon in a river of debris, officials said on Monday.
— New York Times

Philippine president repeats desire to ‘close all mining’ after landslides
Philippine President Rodrigo Duterte on Monday repeated his desire to shut all mines in the country following deadly landslides that some government officials and large miners said have been exacerbated by illegal small-scale mining.
— Reuters

Major changes to expect as idyllic island reopens next month
THE island paradise of Boracay will reopen in October after a long hiatus — but tourists in the holiday hotspot might be in for a major disappointment.
— News.com.au

P50-B ‘misplaced’ funds discovered in 2019 budget
Speaker Gloria Macapagal Arroyo wants to review the proposed P3.757-trillion budget for 2019, after receiving reports from congressmen that there are around P50 billion worth of “misplaced” funds distributed in several districts.
— Rappler

PH rises to 10th spot in sustainable trade index
THE Philippines reached No. 10 in the 2018 Hinrich Foundation’s Sustainable Trade Index, which uses economic growth, environmental protection and social capital pillars to measure the readiness of the United States and 19 economies in Asia for sustainable trade.
— The Manila Times

BOC releases seized rice, food items to DSWD for Ompong victims
The Bureau of Customs (BOC) has reported that seized food items in the bureau’s custody has been delivered to the Department of Social Welfare and Development (DSWD) for distribution to families affected by typhoon Ompong.
— Business Mirror

Housing loans hit P33B
Pag-IBIG Fund released P32.71 billion worth of housing loans in the first half of 2018, a 13 percent or almost P4 billion increase from about P29 billion in the same period in 2017.
— Malaya

DOF expects P11 B from mining tax reforms
The Department of Finance (DOF) expects higher revenues once the proposed amendment to the existing fiscal regime covering all mining operations is passed into law.
— Manila Bulletin

2018 current account deficit seen widening to $7.7B- $9.8B
The Philippines may incur a shortfall of as much as $9.8 billion in its economic transactions with the rest of the world this year, over three times larger than the level at which the Bangko Sentral ng Pilipinas aims to cap the current account deficit, a top economist from ING Bank said.
— Philippine Daily Inquirer

PH food products seen losing out to imports due to sugar woes
Sugar-based food products made here in the Philippines might lose to their imported counterparts from Southeast Asia partly due to the prohibitive price of domestic sugar.
— Philippine Daily Inquirer

‘The Butcher’ gets life sentence
MALOLOS, Bulacan: The Regional Trial Court (RTC) in Bulacan on Monday found retired Army major General Jovito Palparan Jr. guilty of kidnapping and serio2us illegal detention in connection with the disappearance of two University of the Philippines (UP) students in 2006.
— The Manila Times

BFAR ‘loses’ 57 patrol boats acquired from grant, loans
The Commission on Audit said in its annual report that the Bureau of Fisheries and Aquatic Resources (BFAR) has all but neglected and left to waste two batches of patrol boats it acquired from a foreign grant and loans.
— Rappler

‘Trabaho bill’ to force semicons to shed 140,000 jobs–industry bloc
THE irony is real—and could be costly. The government’s second tax-reform measure, dubbed the Trabaho bill in the House of Representatives version, will force the semiconductor industry to lay off 140,000 workers once fiscal incentives are rationalized.
— Business Mirror

First Gen says power users to save P10B with PNOC gas offer
LOPEZ-LED First Gen Corp. said its offer to buy the government’s banked gas at $3.48 per gigajoules could result in savings for electricity users of close to P0.60 per kilowatt-hour (kWh)or a total of around P10 billion for the period starting next month and early 2024, the year when the Malampaya gas-to-power contract ends.
— BusinessWorld Online