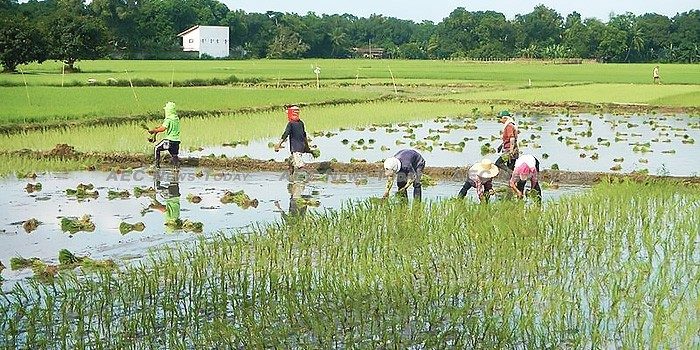 As Super Typhoon Mangkhut (known in the Philippines as Typhoon Ompong) continues its path of destruction the damaged fields and paddocks of Luzon, among others, doesn’t auger well for a country already in the grips of a food crisis, with the departing storm threatening to multiply possible malfeasance by the country’s National Food Authority (NFA) and its chief administrator.

With the price of rice already skyrocketing because of what are described as “extreme shortages” across the archipelago, last week Davao First District Representative Karlo Nograles, chair of the appropriations committee in the House of Representatives, warned people to prepare for even fewer supplies and higher prices.

Speaking at a Meet the Inquirer Multimedia Forum on September 13, Mr Nograles took firm aim at the NFA and the National Food Authority Council (NFAC) for failing to maintain the required 15-day buffer stocks of rice as required, asking beforehand: “If the typhoon devastates northern Luzon, what’s going to happen? The price of rice will shoot up.”

Calling for the NFAC to convene immediately, Mr Nograles declared: “Ompong is [already] here. It will cross northern Luzon, which is our rice granary. It might wipe out our crops.”

“I am proposing that the NFA Council immediately call an emergency meeting and just this once, now that we’re facing a crisis, raise the buying price of palay [unhusked rice] from PHP17 [about US$0.32] per kilogram (2.2 lbs) to PHP22 [$0.41] per kilogram”, he said, adding that agency figures show NFA rice purchases plummeted in the first seven months of the year.

“The reason that we have this problem now was due to the rice buffer stocking of the NFA”, he said. “If you go by the regions, you will know that there’s a problem in the supply of NFA rice.”

Earlier this month when the rice crisis was blowing hottest, which saw calls to axe NFA chief Jason Aquino and abolish the NFAC, Mr Nograles told other lawmakers the NFA was hounded by debt, and had to use the funds meant for the purchase of rice last year, and the first half of this year, to respond to more immediate needs.

“I want to clarify that since 2008 we have acquired huge obligations. The NFA is living on debts”, he told the committee he chaired.

He said the actual amount diverted this year was PHP6.12 billion ($113.5 million), contrary to CoA information.

In a confidential memorandum that was to have been given to President Rodrigo Duterte in April, Cabinet Secretary Leoncio Evasco Jr accused Mr Aquino of selling three days of buffer stock rice meant for poor consumers in one disaster-prone region to selected traders in another for below cost.

“Data shows that a shocking volume of 10.4 million kilos of NFA rice from Region VIII was ransacked by Mr Aquino, only to be sold to his chosen private Bulacan rice traders for PHP235 million [$4.3 million], considering that it was bought by the government for PHP261 million [$4.8 million] for specific rice consumers — poor communities in Region VIII”, reads Mr Evasco’s message, a copy of which was obtained by Rappler. “This was plotted and carried out by the administrator through a mere memorandum.”

Less than half a day’s buffer

Mr Evasco said the sale reduced Region VIII’s buffer stocks to less than half a day’s worth, and that Mr Aquino ignored one of his officials who protested the transaction and urged him to distribute the rice to regions that desperately needed it.

“It is therefore unfathomable as to why Region VIII, a calamity-stricken and very low-producing region, has been deprived of its rightful rice reserves, only to be diverted and sold by the administrator to Bulacan-based private rice traders — a province which does not only enjoy ample supply of rice, but [is] also the hometown of the administrator’s wife”, Mr Evasco wrote.

Mr Evasco added that Mr Aquino made it “extremely difficult, if not impossible” for the NFAC to conduct oversight and supervision of the NFA by banning all NFA employees from communicating and sharing information with other government agencies, including the NFAC, and with any private organizations.

However, even as lawmakers are demanding Mr Aquino resign, the NFA and NFAC administrations are trading barbs over the rice crisis, and Mr Aquino has asked to be relieved of duty.

“Jason Aquino has already requested to be relieved of office. I will scout for a new [NFA chief],” President Duterte said last week, adding that Mr Aquino could not cope with the mounting criticism of his inability to deal with the rising price of rice and its short supply in some markets.

Mr Aquino, who is currently on leave, is to remain the NFA chief until President Duterte installs his replacement. CNN reported on Sunday that the president had already chosen the chief of the Philippine Army, Lieutenant General Rolando Bautista, to be the new NFA administrator, but the general had not yet commented on whether he would accept the position. Lieutenant General Bautista is reportedly due to retire from the military in October.

As the country begins to recover from Typhoon Ompong, people fear that the food crisis will intensify. The NFA has been ordered to facilitate the supply of rice and boost market participation by up to 20 per cent from its current 10 per cent.

“He [Aquino] has instructed NFA officials in regions that may be affected by Super Typhoon Mangkhut to get ready, safeguard NFA stocks and activate their respective operation centres to monitor the situation and provide quick response to any rice needs of the relief operations of concerned agencies and local government units”, the NFA said before the storm arrived.

How competent the NFAs preparedness has been will be seen in market prices over the coming days.