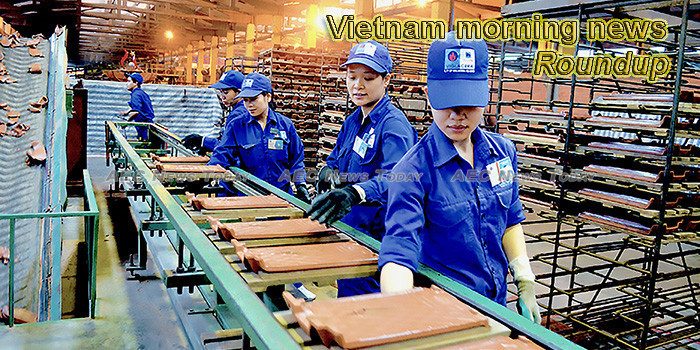 Policies to facilitate newcomers in Vietnam’s aviation industry
The International Air Transport Association also estimated that between now and 2020, passenger transportation in Vietnam is expected to rise by 16 percent, and from 2020 to 2030, by 8 percent.
— Hanoi Times

Petrol tax an unnecessary burden fro firms and citizens: experts
– The Ministry of Finance is launching a plan to put a tax charge on anyone who buys petrol.
— Viet Nam Net

Car sales surge 23 percent in November
Vietnam’s car sales rose by 23 percent year on year in November to 30,540 units, according to a report by the Vietnam Automobile Manufacturers’ Association.
— VNA NET

UN expert lauds Vietnam’s efforts in revising anti-corruption law
A United Nations expert has praised the Vietnamese Government and the Government Inspectorate (GI) for their efforts in amending the Anti-Corruption Law.
— VNA NET

Finance ministry eyes $8.78b bond issuance
The Ministry of Finance aims to issue VNĐ200 trillion (US$8.78 billion) worth of Government bonds and develop green Government bonds in 2019.
— Viet Nam News

Hanoi welcomes 5.74 million international tourists in 2018
The capital city of Hanoi welcomed 5.74 million foreign visitors in 2018, up 16 percent against 2017, among 26 million tourists spending time in the city.
— Vietnam+

RoK ready to help Vietnam with environmental protection: official
The Republic of Korea (RoK) is ready to assist Vietnam in building the capacity of protecting the environment and responding to climate change, and in making relevant laws and regulations.
— VNA NET

Vietnam should have effective tools to control asset declaration: UNODC
A lack of specific analysis on conflict of interest together with unsubstantial asset declaration challenges Vietnam’s anti-corruption process, expert at the UNODC said.
— Hanoi Times

Over 11.7 trillion VND worth of G-bonds raised
The State Treasury of Vietnam has raised more than 11.7 trillion VND (509.1 million USD) from government bonds (G-bonds) during a recent auction at the Hanoi Stock Exchange (HNX).
— VNA NET

Danang faces environmental challenges
Nguyen Thanh Tien, head of the urban department under Danang People’s Council, said the authorities had invested VND5.2trn (USD222.66m) in three drainage projects in the past 20 years. However, the city’s drainage system is still out-dated and couldn’t cope with the rains on December 9 and 10.
— Vietnam Insider

Ministry asks for concerted efforts to prevent poultry smuggling
The Ministry of Agriculture and Rural Development asked for cooperation from cities and provinces and relevant ministries in preventing illegal transport and smuggling of poultry and cattle into Vietnam.
— VNA NET

PV Power to shift listing to HoSE early next year
More than 2.34 billion shares of the PetroVietnam Power Corporation (PV Power) will be listed on the Ho Chi Minh Stock Exchange (HoSE) under the code POW on January 14, 2019.
— Viet Nam Net

Da Lat to be developed into smart city
The Central Highlands province of Lam Dong plans to build Da Lat into a smart city, and is currently seeking the Government’s assistance in the work.
— VNA NET

Vietnamese farm produce confidently conquering the EU market
With an export growth rate of 10% annually, farm produce is currently one of Vietnam’s major exports to the European Union (EU). The Vietnam-EU Free Trade Agreement (EVFTA), set to be signed in the near future, is expected to produce a sharp increase in the export turnover of Vietnam’s agricultural products to this market.
— Nhan Dan online

Programme launched to improve helmet safety amongst children
A programme improving the frequency of helmet wearing amongst children was launched in the central province of Binh Dinh on December 20.
— VNA NET

Nielsen: Consumer confidence at record in Q3
With a nine-point increase over the second quarter of 2018, due to growth in confidence over employment prospects and personal finances, Vietnam’s consumer confidence level has reached a peak for the past decade
— Viet Nam Net

Santa Clause is coming to town
As Christmas is drawing near, Hanoi’s streets on these days have been filled with the vibrant colours of thousands of Christmas decorations.
— Viet Nam Net

Higher hospital fees lead to improved quality
– Fees for more than 1,900 healthcare services for insured patients were raised from 3 per cent to more than 11 per cent at all health facilities in the country on December 15,
— Viet Nam Net

$154 million urban area to be built in Bắc Ninh
A 360ha urban area will be built in Lương Tài District in the northern province of Bắc Ninh, with an investment capital of more than VNĐ3.6 trillion (US$154 million).
— Viet Nam News

Vietnam needs to develop nursing home model
– Nguyen Thi M (not her real name) made the difficult decision to take her mother to a Hanoi nursing home five months ago.
— Viet Nam Net

Japanese firms consider Vietnam key investment destination
About 70 percent of Japanese investors in Vietnam want to continue investing or expand their investments, meaning Vietnam is an important destination for them, according to a representative of the Japan External Trade Organisation (JETRO).
— VNA NET

Much to do in war on poverty
– Multidimensional poverty (MDP) in Vietnam witnessed a significant drop from 15.9 per cent in 2012 to 9.1 per cent in 2016 with some six million people escaping from poverty.
— Viet Nam Net

Agent Orange film to be screened in America
The documentary Inside This Peace featuring a forgotten victim of Agent Orange living in Vietnam will be available on Vimeo On Demand across America this Christmas.
— VNA NET

Vietnamese rice gets official brand name
After decades of being considered to be among the largest rice exporters in the world without a proper brand name, the Ministry of Agriculture and Rural Development has officially a logo for Vietnamese rice brand.
— Viet Nam Net

Reporter arrested after extorting $70,000 from Chinese business
– Dao Thi Thanh Binh, a reporter for Thương Hiệu và Công Luận newspaper, was arrested on Wednesday after she tried to extort US$70,000 from a China-invested enterprise in Bac Giang Province.
— Viet Nam Net

Agriculture sector to face challenges during El Niño spell
Vietnam will likely have to face another El Nino spell in the 2018-2019 winter-spring period.
— Viet Nam Net

Banks raise deposit rates but only short-term
Many commercial banks raised deposit interest rates in recent months, triggering worries about the increasing pressure on the lending rates. But some insist this was only a short-term measure.
— Viet Nam News

Vinhomes IPO honoured by Asian finance media
The initial public offering of Vinhomes, the residential realty arm of property and retail giant Vingroup, in May 2018 has been honoured the best share issuance deal of the year in Asia and Vietnam by overseas media.
— VNA NET