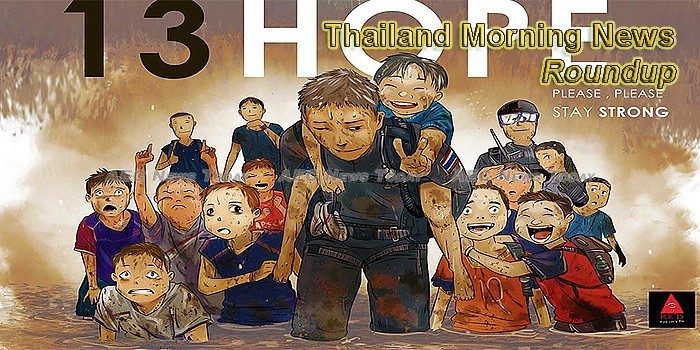 Thai rescuers establish base deep inside cave where boys trapped
Thai navy divers had still to navigate their way through 3km of dark, flooded cave passages on Sunday (Jul 1) to reach the spot rescuers believe would give 12 missing boys and their football coach a better chance of survival.
— Channel NewsAsia

Day 8: Heavy Equipment, Relief Teams Rushed to Thai Cave Rescue Site (video)
As day eight of a desperate search and rescue operation at a northern Thailand cave got underway for a missing teen football team additional personal and heavy equipment are being despatched from the furtherest parts of the kingdom as no effort is spared in the search for the #MaeSai13.
— AEC News Today (video)

We will not stop until we find them: SEAL chief
The commander of the Navy SEAL, a special warfare unit playing a central role in the search for the missing 12 young footballers and their coach trapped in Tham Luang cave in Chiang Rai, vowed this morning that the rescue mission will continue until they are all found.
— Thai PBS

Thai exports respond as China invites world to import expo
OVER 200 Thai exhibitors have registered to participate in the first China International Import Expo (CIIE) to be held in November this year, making it one of the largest national exhibitor delegations, said its organiser.
— The Nation

Majority believe election, new govt will improve economy: poll
A majority of people think the economy worsened during the first half of 2018 and foresee no improvement in the second half, but expect an upswing after a general election is held and a new government in place, according to the result of an opinion survey by the National Institute for Development Administration, or Nida Poll.
— Bangkok Post

BOT boss warns against complacency
THAILAND can draw on the lessons learnt from the 1997 Asian financial crisis to cope with any upheavals that may emerge in the global economy, Bank of Thailand (BOT) governor Veerathai Santiprabhob said.
— The Nation

Southern bird nest collectors join search operation
The ordeal facing the 12 young footballers and their coach trapped in Tham Luang cave in Chiang Rai seems to have spurred a spirit of volunteerism across the country.
— Thai PBS

Malaysian man takes Thai girl, 11, as third wife
A 41-year-old father of six has taken a girl 30 years younger than him as his third wife.
— The Nation

Workers without papers face action
AUTHORITIES have started a crackdown on undocumented migrant workers nationwide after the deadline for proper registration ended over the weekend, with more than a third of a million workers from neighbouring countries having obtained their required permits in the latest round of registration.
— Bangkok Post

Thailand leads in crypto by skipping the big debate
Securities, or not securities. That is the crypto question. Except in Thailand. While regulators around the world have grappled with the issue of what category digital currencies and assets fall into, Thailand has skipped the debate altogether.
— Bangkok Post

Thailand: Rescuers Regain Territory in Search for Missing Soccer Team
Officials working to rescue a teen soccer team missing in a cave in northern Thailand for a week struck a hopeful tone Saturday, as a let-up in torrential rains enabled rescuers to regain territory inside the 10-kilo (6-mile) labyrinth close to where they say the children may be.
— Beanar News

Labor Protection and Welfare Dept to extend maternity leave by 8 days
Thai women will likely to be able to take eight more maternity leave days, bringing the total to 98 a year, as authorities are seeking to reconcile related local laws and international obligations.
— NNT

Business path leads to eco-tourism venture
WHEN Prasert Popaitoon gazed into the future and thought about retirement needs, he realised that he and his wife would not be able to live in the comfort they wanted if he continued in his salaried job.
— The Nation

Relief bags offered to rescuers and families of missing boys in Chiang Rai
His Majesty King Maha Vajiralongkorn and Her Royal Highness Sirivannavari Nariratana have sent relief packages to rescue teams and the families of boys, aged 11-15, missing in a flooded cave complex in northern Thailand.
— NNT

Thailand’s political tough-guy back in the fray to support military as vote nears
The last time most Thais saw politician Suthep Thaugsuban was in 2015 when he entered the Buddhist monkhood and announced his retirement after spearheading protests that culminated in a military coup against a government he detested.
–Channel NewsAsia