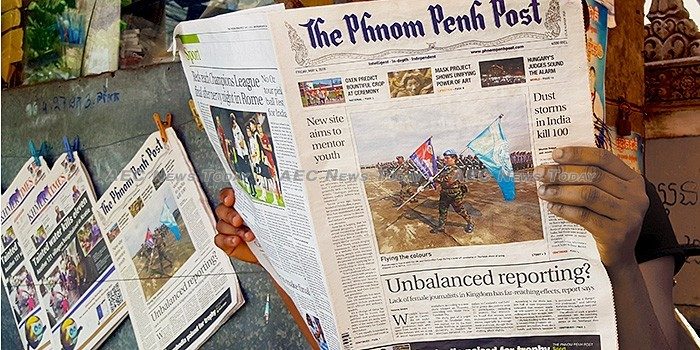 Describing yesterday’s story on the sale of The Phnom Penh Post as bordering ‘on internal sabotage’, an obviously furious Mr Ganapathy said he considered the story ‘extremely damaging to the guiding principle of the purchase and takeover of the (sic) Phnom Penh Post’.

The memo then lists seven specific items that particularly rankled him, starting with the incorrect spelling and presentation of his name, the new ownership structure, his position at Asia PR, as well as claims relating to the firms past work and clients. The memo makes no mention of the original Post Media media announcement by former chairman Bill Clough that said the publication had been sold to ‘Sivakuma G (Siva)’.

In the memo Mr Ganapathy also refutes any relationship with Brigadier General Hun Manith, fourth child of Cambodia Prime Minister Hun Sen, and points out that he took over Asia PR in 2011, well after the Cambodia Times had closed.

Concluding the stinging critique, Mr Ganapathy said that combined “all of the above smells of malice… aimed at tarnishing the good nature of the takeover’.

Unleashing his fury, the memo states ‘such journalists who can be so careless and vicious in their reporting without confirming the facts and depending on Facebook, Linked In (sic) and historic coverage of a previous media scenario, do not deserve a place in a highly reputable newspaper such as The Phnom Penh Post and be a part of its remake’

Describing the conduct of the authors of the story Phnom Penh Post sold to Malaysia investor as in ‘violation of the journalist code of ethics which all journalists and newspapers abide by’, without stating which particular codes he is referring to, Mr Ganapathy’s memo orders that ‘the two journalists who wrote the story with the relevant bylines should be terminated with immediate effect. Also to be terminated with immediate effect is the Editor in Chief (sic) who allowed such a story to be published’. The memo then goes on to name the three individuals.

Mr Ganapathy’s memo says he intends to “express my utter disappointment to ex-owner Bill Clough who had assured me that the news team were of high calibre (now I have serious doubts) when I meet up with the latter and also goes against the spirit in which the transaction was concluded last Friday.

Appointing Purushotman N Govindasamy (Joshua) as “my representative with executive authority”, who AEC News Today understands will also assume the position of editor-in-chief, Mr Ganapathy said that he hopes his disappointment will be expressed to all staff and Mr Clough.

His wishes appear to have been carried out. A little before 3pm today, May 6, Mr O’Byrne tweeted: ‘After being ordered to remove my story regarding the sale of the Phnom Penh Post from the website by new management, I refused and offered my resignation, which was accepted. I wish the fantastic journalists at The Post all the best.’

Ten minutes later Mr Baliga tweeted: The new owner of the @phnompenhpost ordered us to take down the article detailing the sale of the newspaper. I will not be returning to work at the Post. I am devastated at the prospect of not being able to work everyday with the some of best journalists I know. I wish them well.’

According to the above memo Mr Ganapathy is travelling in Malaysia for the next two weeks. Emails sent by AEC News Today to Asia PR’s Kuala Lumpur head office were not responded to prior to publication.

As this article was being prepared for publication AEC News Today was told that additional resignations were expected and that some form of ‘crisis meeting’ was taking place between the new management, their lawyers, and Post Media staff demanding to know why Mr Kay had been terminated. This story will be updated as additional information become available.

What Irked Sivakumar S Ganapathy so Much?

The seven points in the story Phnom Penh Post sold to Malaysia investor which irked new owner Sivakumar S Ganapathy the most were:

The link to The Phnom Penh Post story Phnom Penh Post sold to Malaysia investor was removed due to the original story having been replaced. An earlier update replaced an incorrect author’s byline.