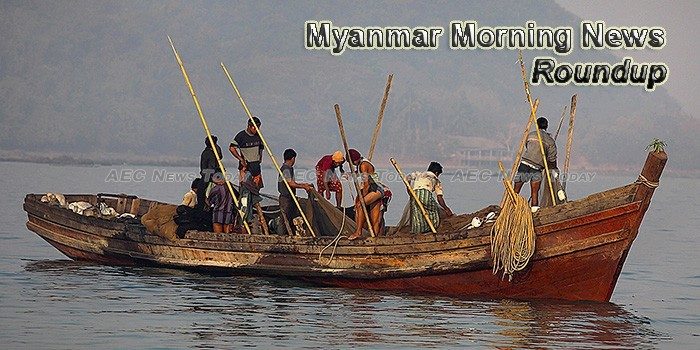 $380 million earmarked for national HIV eradication project
The Ministry of Health and Sports is planning to spend US$380 million (508.1 billion kyat) for a project to make a big dent in HIV nationally, in cooperation with other donor organizations.
— Eleven Myanmar

Australia to train Myanmar military despite ethnic cleansing accusations
The Australian defence department plans to spend almost $400,000 on English lessons, event attendances and training courses for members of the Myanmar military in 2017-18, documents released under freedom of information laws show.
— The Guardian

Tensions escalate as Myanmar increases troops on Bangladesh border
Myanmar’s increased troop deployment on a strip of land on its border with Bangladesh has once again raised questions about its commitment to repatriating Rohingya refugees.
— Asia Times

Boosting Myanmar’s Fishery Sector for Exports
Myanmar is endowed with vast fishery resources in its coastal waters, rivers and inland lakes. Myanmar’s re-emergence in the world of commerce offers exciting opportunities to address the issues of sustainability and conservation, as well as to boost its export potential.
— The Global NewLight of Myanmar

Mandalay public works trucks to be fitted with GPS tracking
TenderS have been invited for a GPS system to be installed on garbage and sewage trucks in Mandalay city, according to the city development committee.
— Consult-Myanmar

JFE Meranti Myanmar to build $85M steel plant in Thilawa
Japanese steel maker JFE Meranti Myanmar held its ground-breaking ceremony at Zone B of the Thilawa Special Economic Zone (SEZ) to much fanfare last Friday. It is the first to commence operations at Zone B.
— Myanmar Times

Developers Urge Government to Temporarily Reduce Tax to 5 percent
During a meeting with the Yangon Regional government held at MCC on February 17, construction developers urged the government to temporarily reduce the commercial tax from 30 percent to 5 percent for a period of two years.
— Consult-Myanmar

Burmese Authority Justifies Illegal Settlement as Development
A new NaTaLa settlement is under the process of construction over Rohingya’s lands, which were confiscated earlier explains a victim from a village in Buthidaung Township.
— Rohingya Vision

Myanmar, India continue pulse and bean price negotiations
Negotiations between the two governments are still ongoing with regards to the price at which Myanmar will sell its pulse and bean produce to India going forward.
— Myanmar Times