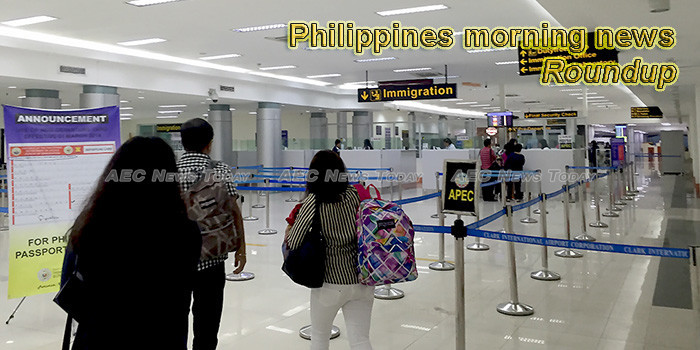 Domestic liquidity expanded 6.4% in June–BSP
THE overall growth of cash circulating in the economy remained tame in June, as bank lending slowed during the period, according to data from the Bangko Sentral ng Pilipinas (BSP).
— Business Mirror

Palace open to use of Dengvaxia
Malacañang on Wednesday said it was open to the use of Dengvaxia if there is a guarantee that it would stop the dengue outbreak.
— The Manila Times

PSC: Protocols in place to ensure proper use of P6-billion SEA Games funds
Safety protocols have been put in place to safeguard the government funds intended for the country’s hosting of the 30th Southeast Asian Games.
— Inquirer.net

DSWD seeks help to raise more awareness on human trafficking
The Department of Social Welfare and Development (DSWD) as the lead agency in fighting against human trafficking spearheaded the commemoration of the World Day Against Trafficking in Persons in Zamboanga City on July 30, 2019.
— Philippine Information Agency

DFA to tighten grant of visa as Esperson sounds the alarm bells on influx of illegal Chinese
Department of Foreign Affairs (DFA) Secretary Teodoro Locsin Jr. on Wednesday recommended the removal of visa upon arrival privilege for foreigners.
— Politiko

Health dep’t eyes maximum retail prices for select drugs
THE GOVERNMENT could issue an order this year that will cap retail prices of select medicines, even as a group of drug manufacturers argued that such a move was unnecessary.
— BusinessWorld Online

Negros killings: Duterte mulls emergency powers
President Duterte is considering the use of emergency powers, including the declaration of martial law, to end the spate of killings in Negros Oriental.
— The Philippine Star

US to assist in upgrading school system in Bicol, Western Visayas
THE US government announced a partnership with the Department of Education (DepEd) for a P2-billion project aimed to improve the reading, math, and socio-emotional skills of more than two million students.
— BusinessWorld Online

Itbayat infrastructure damage at P293M — DPWH; DoTr lines up port improvements
INFRASTRUCTURE DAMAGE cost from the July 27 earthquakes in Itbayat, Batanes is so far estimated at P292.85 million, according to the Department of Public Works and Highways (DPWH).
— BusinessWorld Online

Iloilo mayor gets 16 years for graft
Mayor Rufino Palabrica of Dingle, Iloilo has been found guilty of two counts of graft and may spend up to 16 years in prison.
— The Philippine Star

5G rollout in PH ‘limited’ – Fitch
Despite the publicized efforts of telecommunications companies (telcos) to roll out services powered by superfast Fifth Generation (5G) technology in the Philippines, Fitch Ratings presented a bleak outlook for its initial adoption.
— The Manila Times

PCSO focused on reforming STL, but won’t probe alleged corrupt officials and agents – exec
The Philippine Charity Sweepstakes Office (PCSO) will not conduct its own investigation on alleged “massive corruption” in the agency, but will instead work on reforming small town lottery (STL) operations, its vice president and general manager said on Wednesday.
— CNN Philippines

Some local officials linked to PCSO mess
Without naming names, Malacañang said some local government officials are involved in the corruption in the Philippine Charity Sweepstakes Office (PCSO).
— Tempo

Amid dengue outbreaks, Janette Garin wants Dengvaxia back in PH
Former health chief Janette Garin, who is not representative of the first district of Iloilo, wants the Dengvaxia vaccine be made available in the local market again to help address the ongoing dengue outbreaks in parts of the country.
— Rappler

Lorenzana vows to improve facilities for troops in Pagasa Island
Defense Secretary Delfin Lorenzana said the government will see to it that troops manning Pagasa Island will have better facilities in the coming months.
— GMA News

COA hits delays in implementation of P398-M PAGASA project
The Commission on Audit (COA) questioned the Philippine Atmospheric, Geophysical, and Astronomical Services Administration’s (PAGASA) over delays in the implementation of a P398-million project meant to upgrade the state weather bureau’s data transmission that can be helpful in times of disasters.
— Rappler

SoCot alarmed over rising dengue cases among adults
Health personnel in South Cotabato have raised concern over the rising incidence of the deadly dengue fever among adults.
— Philippine News Agency

China Donates P10 Million To Victims of Batanes Earthquake
The Chinese embassy will be donating 10 million pesos for the victims of Batanes earthquake. The beautiful island of Batanes was devastated by a 6.4 magnitude earthquake last Saturday, July 27, 2019.
— Philippine News

ARTA seeks immediate signing of IRR on use of movable assets as collateral
The Anti-Red Tape Authority (ARTA) is seeking the cooperation of government agencies to help improve the country’s international competitiveness ranking by hastening efforts to promote ease of doing business.
— Manila Bulletin

Employee perks, non-remittance of gov’t shares ailed PCSO for years
The Philippine Charity Sweepstakes Office (PCSO) has not remitted P8.4 billion worth of dividends to the national government since 1994, yet it was found to have spent over a billion pesos on perks for its officials and employees that auditors said were either irregular or excessive.
— Rappler

Philippines approves plan to build new Manila airport
The Philippines on Wednesday approved a plan to build a new airport near Manila, in a bid to ease congestion with the capital’s existing airport operating at full capacity.
— Gulf News

Mayor fears more damage if fish port is unrepaired
The local chief executive of Antique’s capital town of San Jose de Buenavista expressed apprehension on Wednesday that further damage will be incurred if the damaged riprap of the town’s fish port is left unrepaired in the coming weeks.
— Philippine News Agency

PRRD raises bounty anew for capture of cops’ killers to P5-M
President Rodrigo Duterte has increased anew the bounty for the capture ‘dead or alive’ of those who killed four police personnel in Ayungon, Negros Oriental from PHP3 to PHP5 million, Malacañang announced on Wednesday night.
— Philippine News Agency

Why Philippine Startups Are Lagging, But Hope Is On The Horizon
The Philippines has not been on the radar for many investors in the region, but those who actually travel to Manila will find there are still opportunities to make money.
— Forbes

CANADA, PHILIPPINES JOIN FORCES TO FIGHT SEX CRIMES
The Royal Canadian Mounted Police (RCMP) is partnering with the Philippines to help protect children from sexual exploitation and to identify and bring those who harm them to justice.
— The Asian Pacific Post

DSWD releases shelter aid for quake victims in Pampanga
The Department of Social Welfare and Development (DSWD) regional office here started on Wednesday the release of emergency shelter assistance (ESA) to those whose houses were either partially or totally damaged by the 6.1 magnitude earthquake last April 22.
— Philippine News Agency

NHA demolishes ‘illegal structures’ in Dumaguete
The National Housing Authority (NHA) demolished on Tuesday what it considered as illegal structures at the Banilad Plains View Housing Project in Barangay Banilad here after several attempts amid insistence of eight families they are the legal occupants of the lots.
— Philippine News Agency

PHO urges school, community clean-up drive to fight dengue
The Provincial Health Office here called on schools and communities to take precautions in the light of the increasing dengue cases in the province.
— Philippine Information Agency

NegOcc agri office, state school to develop organic farm
A partnership to develop a 500-hectare organic farm is being proposed by the Office of the Provincial Agriculturist (OPA) with the Central Philippines State University (CPSU) based in Kabankalan City, Negros Occidental.
— Philippine News Agency

182K pupils in Bicol benefit from school-based feeding program
A total of 182,462 pupils from Kindergarten to Grade 6 in Bicol Region are recipients of the Department of Education (DepEd) School-Based Feeding Program for school year 2019-2020.
— Philippine News Agency

Vietnam Morning News For May 8