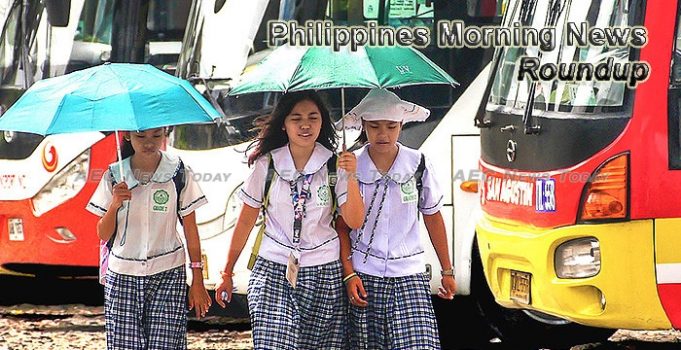 Duterte vows to resign if son proven corrupt
PRESIDENT RODRIGO R. Duterte on Wednesday vowed to resign if one of his children, particularly his vice-mayor son, is found involved in a corruption scandal hounding the Bureau of Customs (BoC).
— BusinessWorld Online

PHL removed from dirty-money list
THE PHILIPPINES has been removed from the watch list of a regional unit of the Financial Action Task Force (FATF) following a new law that requires casinos to report daily deals to regulators, as the global watchdog recognized “significant progress” in combatting dirty-money deals.
— BusinessWorld Online

Philippine anti-terror fatwa to go nationwide
Philippine Muslim religious leaders say they are to issue a nationwide fatwa, a decree based on Islamic teachings, against terrorism following a meeting with military officials on Aug. 7.
— UCA News

Clark airport to remit P38M to PHL treasury
The Clark International Airport Corp. (CIAC) is set to remit more than P38 million to the national coffers, an executive of the government-run airport operator announced on Wednesday.
— Sun Star

MMDA collects P75,000 in fines for distracted driving
The Metropolitan Manila Development Authority (MMDA) has earned P75,000 from the fines charged to violators of the Anti-Distracted Driving Act (ADDA), only a month after the law was enforced.
— Manila Bulletin

DOT seeks P1-billion for branding, ‘influencers’
The Department of Tourism said on Wednesday that it is looking to tap international shows and films, as well as “influencers”, for a branding campaign program next year.
— ABS-CBN

SM Investments earns over P16 billion in just 6 months
SM Investments Corporation, the conglomerate of the Philippines’ richest family, posted a 9% growth in net income to P16.6 billion in the 1st 6 months of 2017, boosted by strong contributions from core property, banking, and retail businesses.
— Rappler

SMIC builds up H1 profit to P16.6 B
MANILA, Philippines – SM Investments Corp. reported a nine percent growth in net income in the first half to P16.6 billion.
— The Philippine Star

Bitcoin Mainstream Adoption in Philippines is Rapidly Increasing, Replacing Banks
Mainstream bitcoin adoption in the Philippines is rising at an exponential rate, as millions of users, local employees and expat Filipino employees are starting to utilize bitcoin to settle remittance payments, utility bills and send payments at lower costs.
— NewsBTC

Manila Water income up 3%
Ayala-led and east zone concessionaire Manila Water Co. Inc. reported a three percent increase in net income in the first half to P3.2 billion owing to higher revenues and growth in billing volume in most of its concession areas.
— The Philippine Star

House pools P16 B for free college tuition
The House of Representatives is pooling together funds totaling P16 billion from state schools and other agencies to use for free tuition in state universities and colleges (SUCs).
— The Philippine Star

President offers P2-M reward for each policeman in cahoots with Parojinogs
PRESIDENT Rodrigo Duterte has offered a P2 million reward for the arrest or killing of each policeman behind the alleged mass grave of the victims of the late Ozamiz City Mayor Reynaldo “Aldong” Parojinog Sr.
— The Manila Times

The Philippine Startup Scene Is Thriving — 3 Local Entrepreneurs Share Why
Most people associate the Philippines with island getaways, turquoise waters, and rum-based cocktails in coconut husks. In short, the Philippines is where you go when you want to escape work.
— Forbes

Bizmen to donate nearly USD20-M scanners for drug war
Philippine Chamber of Commerce and Industry (PCCI) President George Barcelon announced Wednesday that the private sector is donating 20 high-tech scanners that will help in the fight against illegal drugs of the Duterte administration.
— Philippine News Agency

Government needs P272 billion yearly to bridge housing gap
The Duterte administration intends to jump-start a 10-year plan that will solve the country’s 6.5-million housing backlog entailing at least P2.72 trillion in funding, according to the new head of the Housing and Urban Development Coordinating Council (HUDCC).
— Business Mirror

Emperador net income down to P2.7 billion in 1st half of 2017
Andrew Tan-led Emperador Incorporated (Emperador) saw its bottom line drop in the 1st half of the year on soft market conditions.
— Rappler

Agri Chief turns over P4-M fisheries projects in Antique
A total of P4 million worth of fisheries projects for the province of Antique was turned over to farmers and fisherfolk beneficiaries on Wednesday.
— Philippine Information Agency

Govt debt payments up in June – BTr
Debt payments made by the government rose in June but the year to date total remained lower compared to the same period in 2016.
— The Manila Times

Government to turn over housing units to Pasig floodway informal settlers
A total of 180 units in medium-rise buildings for informal settlers living at the Manggahan floodway will be completed on Aug. 15, the day their houses are expected to be demolished by the Pasig City government, an official of the National Housing Authority (NHA) has said.
— Update Philippines

P75 M allotted for culture and arts
The National Commission for Culture and the Arts (NCCA) is currently seeking project proposals from the culture and arts sector in Western Visayas to be implemented in 2018.
— Philippine Information Agency

2 lawmakers file 83-page draft charter to replace 1987 Constitution
A draft federal constitution was filed Wednesday at the House of Representatives as part of a proposal to convene a constituent assembly to amend the 1987 Constitution.
— ABS-CBN