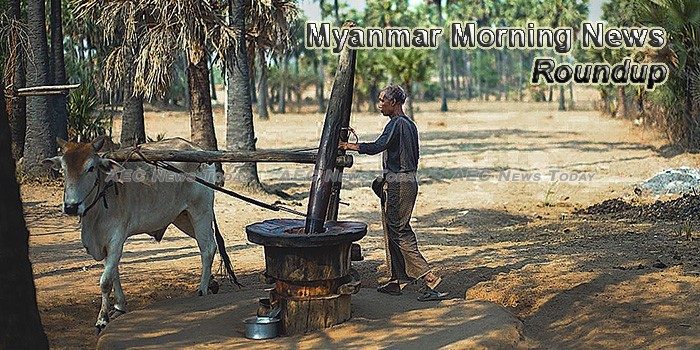 UN chief ‘shocked’ by top Myanmar general’s comments on Rohingya
United Nations Secretary General Antonio Guterres expressed “shock” at comments by Myanmar’s military chief in which he said the Rohingya minority shared nothing in common with the rest of the population and that their demand for citizenship had stoked recent violence.
— Channel NewsAsia

China freezes Myanmar traders’ accounts
Chinese authorities have frozen seven bank accounts owned by Myanmar traders who do business along the border in northern Shan state, claiming that the funds they contain are linked to illegal gambling activities, RFA reported on 26 March.
— Mizzima

Torching hornets nest causes 20 rai forest fire in Mae Hong Son
Two men from Myanmar have been arrested for inadvertently causing a forest fire that damaged some 20 rai of forest in the Khun Yuam district of Mae Hong Son province.
— The Thaiger

Mobile money services make waves in Myanmar
Brad Jones wasn’t sure what to expect when he moved to Yangon in early 2015 to become chief executive of a two-year-old fintech outfit with high hopes of revolutionizing mobile financial services in one of Asia’s poorest countries.
— Euro Money

‘I feel helpless’: Abuses plague Myanmar’s Kachin conflict
It is Armed Forces Day in Myanmar, which marks the beginning of the military’s resistance to Japanese occupation in 1945.
— Al Jazeera

Thai court orders UK activist defending Myanmar workers to pay company
A court in Bangkok on Monday ordered a British labour rights activist to pay 10 million baht (US$321,000) in damages to a company that filed a civil defamation suit after he helped expose alleged human rights violations at its factory.
— The Myanmar Times

Suspects in Myanmar Warehouse Theft Tortured by Local Police
Two fishermen accused of stealing money and supplies from a warehouse in Myanmar’s Irrawaddy division have been tortured under questioning by police, with both men suffering burns to their genitalia and injuries from blows to their face, a rights worker says.
— Radio Free Asia

Price of higher-end vehicles fall after tax reduction
Some high-end cars are looking a little cheaper following a reduction in taxes on special goods under the new 2018 Union Tax Law, which was signed into legislation on March 20.
— The Myanmar Times