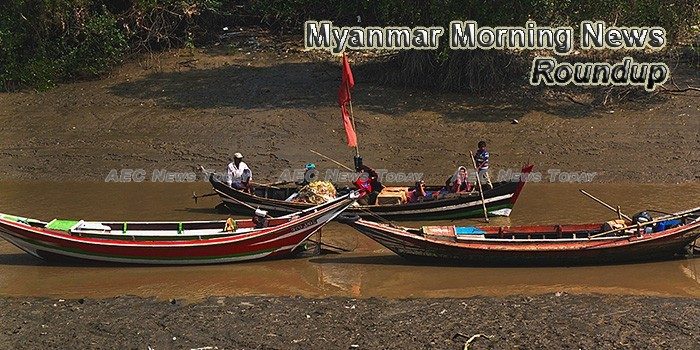 Myanmar farmers going against the grain with apps
A free app on farmer San San Hla’s smartphone is her new weapon in the war against the dreaded stem borer moth that blighted her rice paddy in southern Myanmar for the last two years.
— The Nation

Transnational Terrorism and ARSA’s Fight for a ‘Just Cause’
Sitting in their dilapidated ground floor apartment near the Indian city of Ghaziabad, Khalimullah and Faizal were discussing the fate of more than 700,000 Rohingya living in the Cox’s Bazar refugee camps in Bangladesh when they were distracted by the television. There was news of a Jan. 5 ambush by the Arakan Rohingya Salvation Army (ARSA) on Myanmar security forces in Rakhine State.
— The Irrawaddy

One million housing units to be developed in five years
The incumbent government will develop one million low, fair and high-cost apartments during its term and now has developed more than 40,000 apartments, according to an official from Urban and Housing Development Department at the Construction Ministry.
— Eleven Myanmar

Railway reforms in Myanmar pick up steam
Since traffic congestion in Yangon has worsened due to the rise in internal migration, Myanmar has plans to speed up its railway sector reforms from this year onwards, according to a government official.
— The Nation

Is Capital Punishment for Rapists the Answer?
If you are a teenage girl in Myanmar, your mother, grandmothers and aunts worry about you. You are told to dress modestly, never to go out alone and not to leave the house after sunset. You are forbidden to play with teenage boys when you start menstruating. All the while you are warned of the dangers of being raped.
— The Irrawaddy

Factors and actors behind Beijing’s engagement with Myanmar
TO view the vast array of actors and interests behind Chinese foreign policies and humanitarian actions in Myanmar as one single “China Inc.” is extremely simplistic, experts told The Myanmar Times.
— Myanmar Times

Bangladesh gives to Myanmar official the names of refugees for repatriation
A Bang-ladesh Cabinet minister gave a list of 8,032 Rohingya refugees to his Myanmar counterpart to begin repatriations of the Muslim minority under a November agreement between the two countries.
— BusinessMirror

Myanmar dam on border worries Manipur village
A dam being constructed by Myanmar across a river close to the boundary with India has stoked fears of submergence and water scarcity among border villagers in Kengjoi subdivison of Manipur’s Chandel district.
— The Hindu