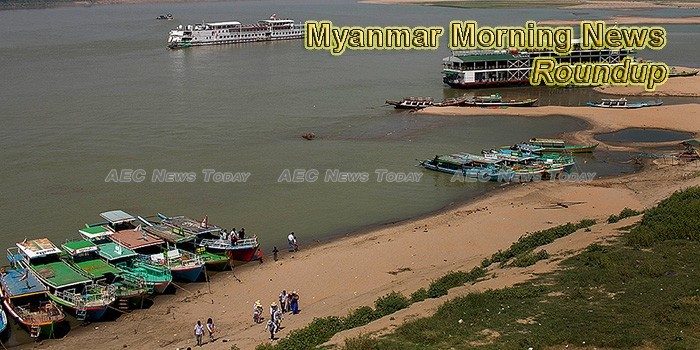 Rohingya rape survivors ‘ashamed and scared’ as babies born
More than 10 months have passed since Myanmar’s security forces launched a sweeping campaign of rape and other brutalities against the Rohingya, and the babies conceived during those assaults have been born.
— The Globe and Mail (video)

Concern among traders mounts as dollar continues rise against kyat
Local traders who import goods are concerned about the recent spike in the value of US dollar versus the Myanmar kyat.
— Myanmar Times

UN rights chief slams ‘investigative whitewash’ and calls for ICC referral
The UN human rights chief said yesterday that attempts to “whitewash” atrocities against the Rohingya would not absolve Myanmar of its crimes and called for the country’s immediate referral to the International Criminal Court.
— Frontier Myanmar

Physicians say Rohingya scars ‘highly consistent’ with Myanmar atrocity reports
Rohingya Muslims’ accounts of being shot, hacked and wounded by explosives are supported by forensic evidence, according to a report by physicians who examined them in refugee camps in Bangladesh.
— Reuters

Key findings: Myanmar Living Conditions Survey 2017
A joint report by the Central Statistical Organisation, the UNDP and the World Bank, reveals significant changes in living conditions in Myanmar over time. The key findings are:
— Myanmar Times

Refugees Criticize UN-Myanmar Repatriation Deal
Rohingya refugees who fled Myanmar for Bangladesh amid a brutal army crackdown last year are criticizing a repatriation agreement between the Myanmar government and two U.N. agencies, following the leak of a draft of the deal online last week.
— VOA

Government ‘hasn’t relaxed death penalty’
The ruling government is not changing the way it deals with the death sentence in the country, Deputy Director of the Prisons Department U Min Tun Soe has told The Myanmar Times.
— Myanmar Times

RESTRICTING EDUCATION FORCED ROHINGYA STUDENTS TOWARDS DARK FUTURE
Nearly 700 remaining Rohingya students in village tracks of northern Buthidaung are restricted from getting any sort of education and their future seems to be uncertain, reports locals from the area.
— Rohingya Vision