By Michael Johansen on September 7, 2018 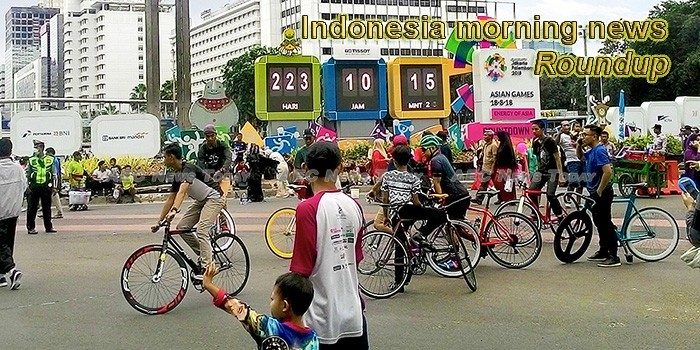 Pertamina profit plummets as govt insists on cheap fuel
The profit of state-owned oil and gas holding company Pertamina has reportedly dropped to less than Rp 5 trillion (US$335 million) in the first half of 2018 from Rp 18.73 trillion in the same period last year.
— The Jakarta Post

Minister Luhut Reschedules Electricity Projects in Java
Coordinating Minister for Maritime Affairs Luhut Binsar Pandjaitan said a number of electricity infrastructure projects in Java Island would be postponed in the wake of rupiah depreciation against US dollar.
— Tempo

Police set to disband ‘anti-Jokowi’ event in Central Java
The Central Java Police have prepared around 2,500 personnel to disband an upcoming sporting event in Kota Barat square they believe to be part of a political movement against President Joko “Jokowi” Widodo.
— The Jakarta Post

India boosts purchases of Indonesian coal as prices drop: Russell
One of the standout commodity performers this year has been thermal coal, but not all coal is created equal and disparities in pricing may help explain why India’s imports have stayed strong despite the higher costs.
— Reuters (column)

Subsidy for Diesel Fuel Increased, Fuel Price will not Rise
The Indonesian government increased its subsidy to Rp2,000 per liter for diesel fuel, which is locally known as ‘Solar’.
— Tempo

Reading Indonesia: 30 Books That Will Help You Understand the Southeast Asian Giant
As part of our Jakarta Globe Reading Club’s “Reading Indonesia” event on Saturday, Sept. 8, at Maxx Coffee in Lippo Mall Kemang, South Jakarta, we’re publishing this list of 30 books on Indonesian history, politics, economy, culture and literature that might help you gain a deeper understanding of the sprawling archipelago of more than 18,000 islands and 267 million people – and its long and complex story.
— The Jakarta Globe

Oil companies to be required to sell crude oil to Pertamina
The government has planned to issue a regulation that would require that oil companies sell their crude oil to state energy holding company Pertamina as part of an effort to reduce imports.
— The Jakarta Post

BOE expands Indonesian market with IoT solutions
The Asian Games in Jakarta came to a successful conclusion on September 2. Athletes from across Asia had offered a wonderful sports feast for the whole world.
— Business Insider

10 Students Named Suspect in Violent `Tawuran` that Killed a Boy
The police have captured 29 teenagers who were involved in a violent fight between students—also known as tawuran—that caused the death of a 16-year-old high school student from SMA Muhammadiyah.
— Tempo

Ahok`s Life Story to be Made Into a Film
The life story of the former Jakarta Governor Basuki Tjahaja Purnama or Ahok will be made into a film.
— Tempo

Indonesia deports 40 Bangladeshis
Indonesia has deported 40 Bangladeshis for violating regulations on immigration after previously they were detained in Pekanbaru, Riau.
— Antara

Police Deputy Chief Guarantees National Police Will Remain Neutral during 2019 Elections
The National Police (Polri) Headquarters guarantees that the National Police will remain neutral when the 2019 legislative election and presidential election take place and create a conducive atmosphere to prevent conflict amid the community.
— Netral News

Why a stronger Indonesia is still Asia’s most fragile market
Notwithstanding solid economic growth, low inflation and a proactive central bank, Indonesia finds itself in the same uncomfortable position it had during the 2013 emerging markets sell-off – Asia’s worst-hit market.
— Reuters

Emerging-Market Rout Claims a Blameless Victim
Whenever there’s a bout of emerging-markets flu, Indonesia catches it. Jakarta may be crying foul, because it looked as though the nation was inoculated.
— Bloomberg