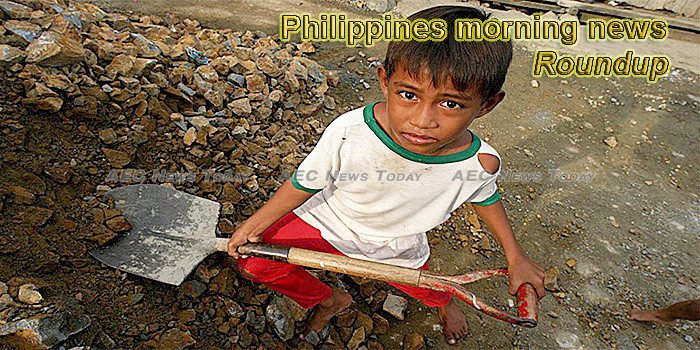 Additional P150 B capital for BSP to enhance operations
The Bangko Sentral ng Pilipinas (BSP) said the P150-billion additional capitalization is crucial in further enhancing the operations of the central bank.
— The Philippine Star

Customs, BIR complete fuel marking IRR to stop smuggling
THE Bureau of Customs (BOC) has reported that the master plan for the implementation of the fuel marking system in 2019 will be submitted by the end of November, and that it has already drafted the implementing rules and regulations (IRR) together with the Bureau of Internal Revenue (BIR).
— Business Mirror

Oil deal with China can be abandoned ‘if detrimental to interests’
The Philippine government may terminate a proposed joint oil and gas exploration deal with China if it would turn out “detrimental” to the country’s interests, according to a Malacanang official.
— Gulf Times

Debt payments reach P620 B in September
The national government spent P620.54 billion to settle its debt from both domestic and foreign lenders in the first nine months of the year, the Bureau of the Treasury (BTr) reported.
— The Philippine Star

Growth to stay domestically-driven
Philippine economic growth will remain strong notwithstanding the impact of challenges that have weighed on consumer demand and state spending, S&P Global Ratings said.
— The Manila Times

Treasury advances 2 bond auctions
Amid recent strong demand for government securities as well as a possible global bonds sale before the year ends, the Bureau of the Treasury has rescheduled two upcoming T-bonds auctions both by a week earlier.
— Philippine Daily Inquirer

BOI confident of hitting P680-B investment goal
The Board of Investments (BOI) has approved P575 billion in new investment pledges as of mid-November this year making it on track to hit its overall 2018 goal of P680 billion.
— Manila Bulletin

Palace urged to rescind fuel taxes
Malacañang should rescind the taxes imposed on diesel and kerosene altogether after it agreed to suspend the second tranche of the Tax Reform for Acceleration and Inclusion (TRAIN) Act next year, according to Marikina City Rep. Miro Quimbo.
— Philippine Daily Inquirer

Solon rules out merger between Mislatel, PLDT
Despite the recent alliance forged between businessmen Manuel Pangilinan and Dennis Uy in a major oil exploration firm, it would be impossible for the two to eventually combine their telecommunications entities, a member of Congress said Sunday.
— Manilastandard.net

DICT chief: Selection of 3rd telco player aboveboard
HEARING rumors that the third telco initiative was rigged and marred with corruption, the chief of the Department of Information and Communications Technology (DICT) clarified that the selection process was aboveboard and beyond reproach.
— Business Mirror

Why deals and cooperation are the keys to building on the energy from Xi-Duterte talks
As expected, President Xi Jinping’s historic state visit to the Philippines was filled with bonhomie and ambitious pronouncements.
— South China Morning Post

DICT to work with DTI to upgrade MSMEs’ e-commerce capabilities
THE Department of Information and Communications Technology (DICT) will soon partner with the Department of Trade and Industry (DTI) to promote best practices in e-commerce among exporters.
— BusinessWorld Online

The push to end violence against women
Today marks the International Day for the Elimination of Violence Against Women.
— The Asean Post

Hundreds join campaign to end violence vs. women
More than 200 participants joined the United Nations Women Philippines and the Belgium Embassy in Manila during a cycling event campaigning for the elimination of violence against women in the Philippines on Friday.
— Philippine News Agency

Improving education in the Philippines
The research arm of Switzerland-based business school International Institute for Management Development (IMD) recently conducted a survey on the talent competitiveness of 66 countries around the world.
— The Asean Post

Demolition of Clark ‘dog heroes’ cemetery sparks outrage
A cemetery established here by the US Air Force for “dog heroes” has been ploughed through and laid over with soil overnight, prompting some sectors to cry foul.
— The Philippine Star

Fighting for divorce in the Philippines
Marriage is a life-defining moment for a young woman. For Melody Alan, that moment came when she was 21, fresh out of college and in love.
— The Asean Post

Angeles to proceed with P1.2-b in projects
P1.2 billion worth of construction projects in Angeles City will continue as planned “to better serve the needs of the people,” Mayor Edgardo Pamintuan said Sunday.
— Manilastandard.net