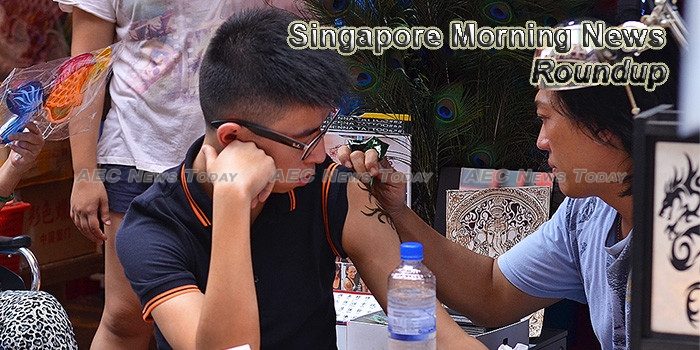 Singapore to focus on e-commerce, digital economy when it takes over Asean chair
SINGAPORE will focus on e-commerce and the digital economy as well as improve trade facilitation in the region when it takes over the Asean chairmanship in 2018. Among other things, the Republic is looking to achieve a single window for Customs clearance.
— The Business Times

Email offering tax refunds a scam: Iras
The Inland Revenue Authority of Singapore (Iras) has warned the public against clicking on a scam email that promises tax refunds and is made to look like it came from the tax authority.
— Today Online

Singapore, Nordic countries outrank US in achieving UN health goals
Are nations around the globe on track to meet health-related sustainable development goals for the year 2030? A new analysis finds outstanding achievements — but a great deal of work still needed — before the goals can be reached
— CNN

Singapore crowns president without vote
The city-state’s Elections Department said only one of five nominees had qualified while the others failed to meet strict criteria like holding public positions or managing a firm with at least 500 million Singapore dollars (US$370 million) in equity.
— Asean Economist

New Nets app to allow payment by mobile phone
This will involve syncing your ATM card with the new Nets app NetsPay – that will be launched by mid-October – the payments provider announced yesterday.
— The New Paper

A Lowball Singapore Takeover
If he were alive today, the rubber and pineapple king of 1930s Singapore would surely be asking whether the custodians of his empire just sold another chunk of it too cheaply.
— Bloomberg

Singapore’s Start-up Ecosystem – Part III: The Role of Venture Capital Funds
In the first and second parts of this three-part series on Singapore’s start-up ecosystem, we discussed how the city-state has emerged as a preferred base for international entrepreneurs and the opportunities it offered young overseas talent. In this concluding part, we look at the role of venture capital (VC) funds in nurturing entrepreneurship and innovation in Singapore.
— Asean Briefing

Singapore Set to Sign Free Trade Agreement with the Eurasian Economic Union by Year-End
Singapore is set to sign a Free Trade Agreement (FTA) with the Eurasian Economic Union (EAEU), a free trade bloc that includes Armenia, Belarus, Kazakhstan, Krygyzstan, and Russia. Commenting on the incoming trade deal, which is expected to be signed by the end of this year, Singapore’s deputy prime minister, Tharman Shanmugaratnam reiterated his country’s interest in economic and trade cooperation with Russia, noting that the two states have not been using the existing potential in full.
— Asean Briefing

Mental illness can shorten lifespan by 20 years
Mr Matthew Gan’s late mother spent a large part of her life grappling with schizophrenia, a severe mental disorder which caused her to experience hallucinations and delusions.
— Today Online

Alpha sells 22 units at Draycott Eight
IN WHAT is believed to be the first bulk transaction of residential units in a development following a tightening of stamp duty rules in March, American alternative investment manager Angelo Gordon has bought a stack of 22 units in the Draycott Eight condo for over S$100 million.
— The Business Times

Singapore: Sugar Ventures-backed Dropfoods to launch $9m digital token offer
Dropfoods, which claims to be the largest smart vending machine operator in Vietnam, has launched an Initial Coin Offering (ICO) – open only to accredited investors – to raise $9 million with the issuance of its own Dropcoin tokens.
— DealStreetAsia